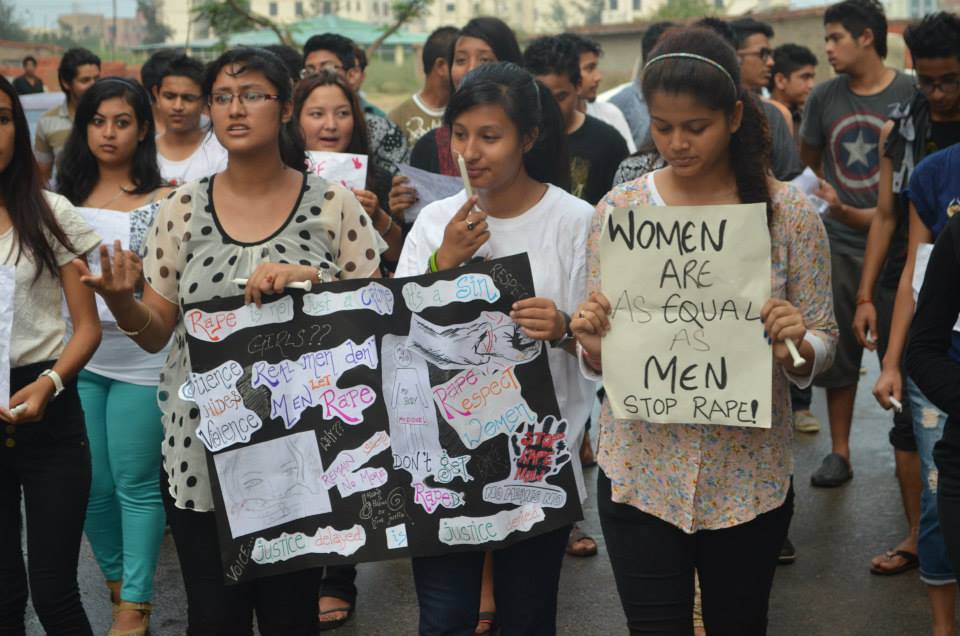 KATHMANDU: After four days of intense backache, Shristi Thapa (name changed) finally decided  to visit a physician in a prominent hospital in Kathmandu.

Rather than finding out why her back hurt so much, Shristi was disgusted with her experience at the hospital.

“I had gone to diagnose my backache but he started to see my rashes around my breast by slightly pulling the t-shirt,” she said. When she retaliated, the physician went to look at her backache.

“As the ache was near the coccyx bone, I had to lower my trousers,” she recalled. But with what followed, Shristi was appalled. “The physician parted his legs and moved forward to touch my genital.”

This was one of the many incidents that disgusted Shristi. Couple of months ago, she enrolled in a vehicle driving center to learn to ride a scooter with her aunt. The trainer cared little for her aunt. Instead, he stuck with Shristi on the backseat, unnecessarily guiding her hands as she held the handles and taking her to the street for ‘practice’.

By the third day, Shristi dropped out of the training. With more than a handful of harassment cases she can recall of, Thapa is concerned of her safety, especially when the numbers of rapes is increasing across the country.

A week ago, #rageagainstrape trended on Twitter and media report that said 78 rapes were reported every month was a shock to many. Twitter users were quick to express their angers, frustrations and question why such acts were increasing in the country. It is here that decoding human behavior through psychological analysis provides some understanding into why perpetrators pounce on their prey.

Karuna Kunwar, a prominent psychologist of the country shared that during rape; each perpetrator reflected two common emotional expressions; anger and power.

While difficult childhood can stem from numerous reasons, parents, if cautious, can detect harmful expressions early. Such expressions include disrespecting women or portraying them sexually, agitation and aggression.

“With all cases that I have come up with, difficult childhood experiences has been the most common,” Kunwar shared adding that suppression of such emotions led to violent forms of expression that is cast upon weaker, usually children below 16.

Narendra Singh Thagunna, lecturer of Psychology at Tri Chandra Campus adds that people who have compulsive behavior also tend to become perpetrators. “While power and anger are contributing factors, it is not all,” Thagunna said adding that studies showed that most rapists forced victims to have sex, not for power or control, but because they wanted sex.

A 2010 research by Rachel Jewkes of the University of the Witwatersrand supports Thaguuna’s view. The research, which included random sampling of men aged 18-49 showed that boredom and sense of sexual entitlement were common elements of rape and alcohol often played a part.

Research over the past three decades suggests that several mental health issues underlie sexual violence and offending, particularly rape. It may be associated with ‘organic brain damage and learning disability disorders associated with congenital or acquired brain damage,’ a research on Mental health assessment of rape offenders by Dr. Jaydip Sarkar at the Department of General and Forensic Psychiatry, Institute of Mental Health, Singapore states.

AWARENESS IS THE KEY

Contrary to popular beliefs that a strong woman character, usually defined by vocal expressions and intellectual strength, might help shoo away potential rape perpetrators, ‘strong character’ alone is unlikely to help. “Instead, it might make one more vulnerable as it can be easily misunderstood as ‘bold’. Strong and aware is the key,” Kunwar suggests adding that awareness led individuals to take more informed decisions and therefore, reduce the risks of becoming a victim.

In schools across the country, the topic of sex is a broach and both teachers and students find it ‘inappropriate’ to dwell deeper. The units are quickly finished; questions are rarely asked and seldom answered. At homes, the topic itself is rarely raised. Our socio-cultural background imposes self-imposed restrictions to talk about sex.

For this reason, psychologists as well as media analysts suggest that it is high time that parents start to talk about it and learn how to answer questions and break misconception. “As parents shy away from the topic, a common answer is ‘you will know when you grow up,’” Kunwar said.

Bedroom culture’ is a practice where individuals browse internet content, especially those that cannot be viewed with others on their beds

Such procrastinated answers eventually lead children to find their curiosity in the internet which makes them more vulnerable.

The internet as a medium provides diverse content, including pornography which accounts for 30 percent internet traffic globally. The boom of handheld devices after 2000 AD, availability of wireless internet and cellular data has led to evolution of ‘bedroom culture’, Ujjwal Acharya, a prominent social media analyst said.

‘Bedroom culture’ is a practice where individuals browse internet content, especially those that cannot be viewed with others on their beds. Such private browsing leaves individuals vulnerable to pornographic contents and sexual communication and sometimes leads to curiosity, sexual fetishes and trigger violent sexual acts.

Across the country, internet penetration has climbed to 61 per cent from a million users in 2010. Over 6,581 new users are connected to the internet every day. A 2017 Management Information System (MIS) report of Nepal Telecommunication Authority shows that 16,186,759 people in the country had access to internet/data services till mid-July — an increment in internet users by 2,402,141 compared to internet penetration of 13,784,618 recorded till mid-July, 2016.

At current rate, internet penetration is likely to range between 80-90%, Acharya opined with a concern. “While internet usage has increased, there’s little awareness among users on safe browsing.” If Acharya’s concern is to hold true, internet induced violence, rape and sexual harassments are likely to escalate in the country.

People say no to transport syndicate

KATHMANDU, May 5: The government is adopting ‘zero tolerance’ policy against the syndicate of transport entrepreneurs. To defy the government’s implementation... Read More...