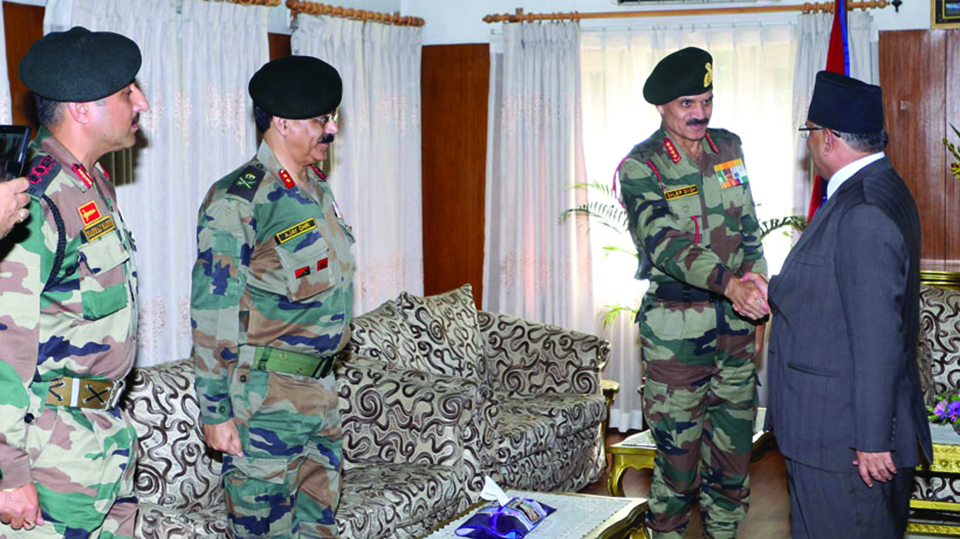 Why is India pushing for opening more pension paying offices while pension can be paid through banking channels? It smells of ulterior motive.

Mutual respect is the requirement for friendly relations between neighboring countries.  Geographical and military might do not count much in new global order, intimacy of heart does. In case of Nepal, the country has rarely received selfless support from India. One of example is India’s reluctance to withdraw Indian Army from Nepal which was stationed here in 1969 in the name of paying pension to former servicemen of Indian Gorkha and to their relatives and operate some welfare services for them.

The government decision to provide land for Indian Pension Paying Office in Butwal has come under heated debate. India was using all channels possible to obtain land for quite a long time. Indian Army Chief during his last visit to Nepal had requested Nepali prime minister for it. Indian President Pranav Mukherjee in his visit to Nepal on November 2, 2016 had asked former PM Pushpa Kamal Dahal to provide land for Indian Pension Camp to ease payment of pension.

Government of Deuba easily provided it in Butwal Gadhi area for Pension Paying Office (PPO). With this, the number of Indian PPOs in Nepal has reached more than 25.

Pension paying is only the cover.  Of late India has been setting up PPOs and District Soldier’s Boards (DSBs) in Nepal. The Indian Ex-Serviceman Welfare Organization in Nepal (IEWON) with Indian Ambassador to Nepal as Chairman has extended its network in as many as 25 districts. Two PPOs already operate in the name of Defense Wing of Indian Embassy in Nepal. The Indian Defense   Attaché (officer of Colonel Rank) in Nepal operates this unit.

Although the stated purpose is ‘to ease payment of pension, care for the family of ex-servicemen and fresh recruitment of Nepali youths into Indian Army’ the main objective has been to carry out espionage so as to develop Nepal as a ground of Indian strategic base. Frequent pressure to open PPO justifies this. The number of DSB offices in 2006 was 16. It has reached almost 25 by 2017.

Why is India doing this when the country is opting for extensive banking service? It remains shrouded in doubt and mystery. Pension can be paid through banking channels because branches of Indian banks—such as Punjab Bank and State Bank—are already operating services in Nepal. If they are not enough more banks could be opened up.

On July 14, 2000, the tripartite meeting of Ministries of Defense, Home Affairs and Foreign Affairs had reached the conclusion that when bank service has become reliable granting permission to open PPOs and DSBs in Nepal would be against the national interest, national security and defense. Nepali political leadership could not hold on this decision, which is why Indian Army has sneaked into Nepal in this or that excuse.

Until 1949 Indian Embassy used to pay pension to ex-servicemen. In 1950 it was shifted to Defense Attaché. Indian Army opened branch offices of PPOs in Pokhara and Dharan in the 60s. As many as 42 ‘in-service’ Indian Army personnel—from soldiers to colonel—work in those offices.

This is happening at a time when India is bringing banking services down to the people. Its interest in paying pension in cash to its ex-servicemen smells of ulterior motive. It can be fairly said that India is doing all this to make presence of Indian Army stronger in Nepal. The other motive could be to collect confidential information of Nepal.

India has already expanded its influence in Nepal through cultural centers, libraries, schools, Consular Offices and Field Offices. The Consular Office set up in Birjunj in 2003 is found to have been involved in stoking political unrest.  The involvement of officials working there had been reported during the Madhes protest and economic blockade of 2015. Evidently, these offices are not helping the cause of promoting bilateral ties.

India has been trying to open branches of such offices in Butwal, Nepalgunj and Dhangadhi as well. The consular office has a number of 50 staff whereas the same nature of work is being done through banks by United Kingdom. The British pension authorities are encouraging their ex-servicemen to receive money through banking channels for safety.

There is a long-standing provision of the incumbent secretary from Defense Ministry to become a chairman of Coordination Committee of British Gorkha Welfare Service Central Office. Dubiously, Indian DSBs and PPOs that claim to provide similar services don’t entertain even a representative from Nepal. This is a serious issue because what India wants in Nepal has remained the subject of debate for a long time.

The Field Office in Biratnagar still remains despite Nepal government’s correspondence for the last eight years to remove it forthwith. Forget about pulling it out, India is exerting pressure on Nepal to give it a status of diplomatic office. Arguably because the political parties are more lenient to Indian policy, India is securing its interest unhindered.  The 1950’s treaty has literally put Nepali security organizations under Indian control regarding logistic support. This is unfortunate but no security chief of Nepal has ever raised a voice against it.

The talk about friendly relation will be meaningless if India wants Nepal to remain under the shadow of its military presence. Our own government and security organizations are to be blamed for this but India should also seriously consider withdrawing its military presence from Nepal.

The author is a retired Brigadier

Foreign minister says govt has no intention to discourage I/NGOs

KATHMANDU, July 11: At a time when there are concerns from various quarters that the government is bent on curbing civil... Read More...

MUMBAI, July 30: His upcoming period-drama "Padmavati" may have been mired in controversies, but actor Shahid Kapoor said the film... Read More...