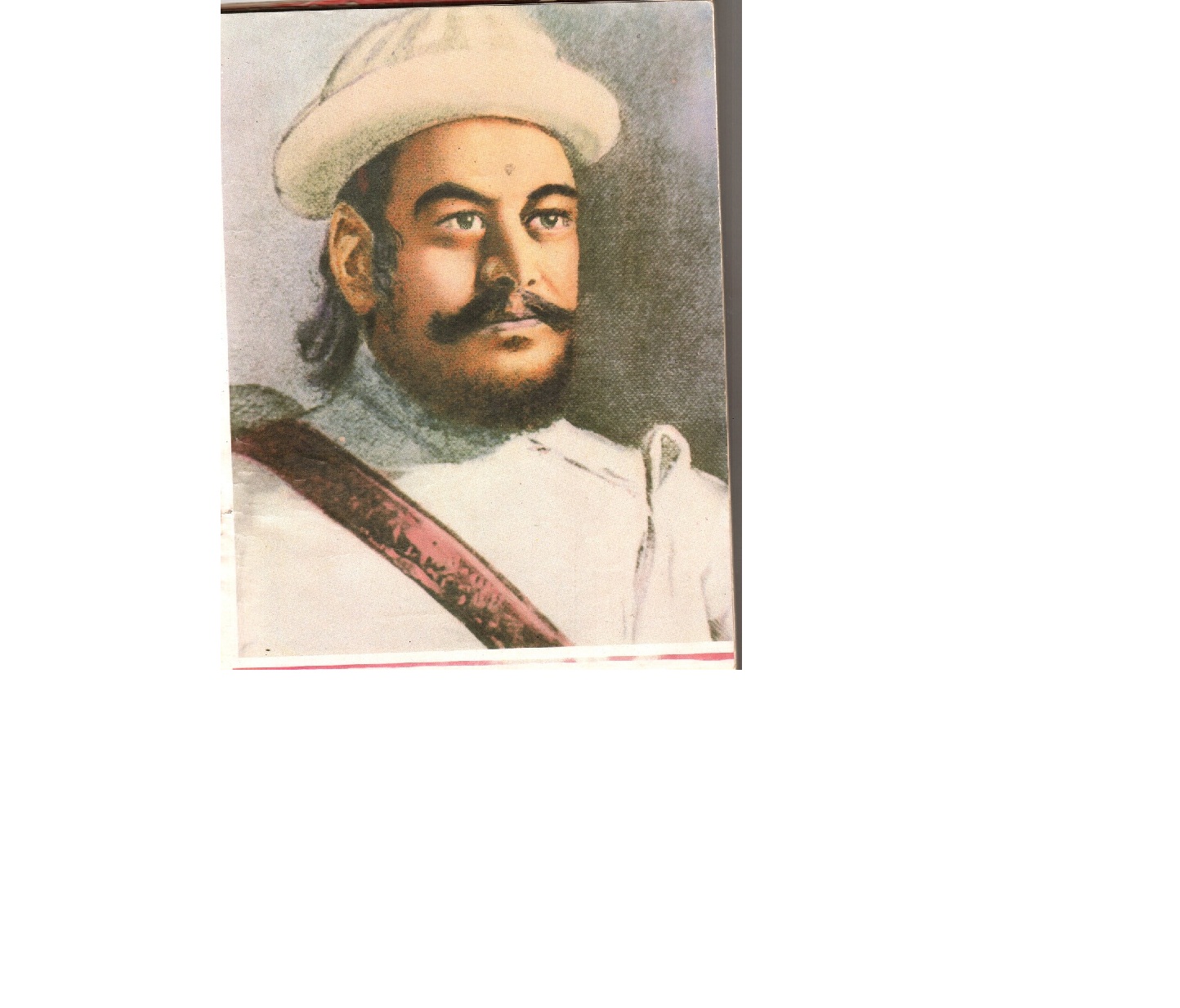 Bhakti Thapa died on the battle field and exhibited great valor, for which he will be remembered forever. Can we say the same thing about Bada Kaji Amar Singh Thapa?

The Chhota Kazi was the father of Bhimsen Thapa. Bada Kaji was the hero of Nepal’s war of unification. His contribution is remarkable. He also had made several patriotic correspondences with Nepal Darbar during Anglo-Nepal War (1814-16).  Perhaps, for this reason Bada Kaji has been idolized in Nepal’s military history.  But there are several gray areas about which need to be researched.   For a better perspective, we can look into the role he played during the battle of Malaun.

The main warrior of battle of Malaun is Saradar Bhakti Thapa. The king of Nalagadh had built Malaun fort, which is located in Malaun village of Himanchal Pradesh of India. The fort came under Nepali possession after the unification of Nepal. Many Nepalis from today's far-west region of Nepal had enlisted into the army and fought in war of unification and the war with the British. Their descendants live in Khalanga village.

Second, the war at Malaun started after the British troops, defeating Nepalis in Sutlaj-Nalagadh area, advanced toward Malaun.

Bada Kaji Amar Singh Thapa reached the conclusion that the war with the British could not be won and he had an agreement with David Ochterlony on May 15, 1815 at this fort, ceding lands from Sutlaj to Mahakali in the east. Third, the agreement of May 15, 1815 has the provision which allows those serving in Nepal Army, those defected and even other Nepalis for legal recruitment in British Indian Army. For the first time the Nasiri Regiment was raised at Malaun in 1815 from the defeated Gurkha Army after the Anglo-Nepal War. The Nasiri Regiment which was born from this fort came to be expanded into British Indian Gorkha. After the India’s independence of 1947, those willing to serve under the British were segmented under British Gorkha and others willing to serve in India came to be segmented under Indian Gorkhas.

The commander of war in Sutlaj, Malaun and Nalagadh areas was Sardar Bhakti Thapa. Bada Kaji Amar Singh Thapa was the overall commander of Malaun-Jaithak–Nalapani areas. Bada Kaji Thapa was in Arki fort of Baghat and thus was commanding the troops from there. Meanwhile, Nepalis had already suffered a huge loss in Nalapani and war was going on at the foothill of Jaithak. Likewise, the British troops were advancing toward Malaun from Nalagadh-Bilaspur area.

Bada Kaji was required to issue the order for battle to Bhakti Thapa from Arki. He did not do so. Yet, dissatisfied with silence of Bada Kaji, Sardar Bhakti Thapa and other commanders launched spoiling attacks against the British.  Bada Kaji was not happy to know about it. It led to the distrust between him and his subordinate commanders.  Because Nepali side was not aggressive enough, the British side could move further toward Nepali defensive positions.

Bhakti Thapa was not happy with the way Bada Kaji was operating the war. Bada Kaji then walked up to Malaun along the 50 kilometers distance with his family and movable assets from Arki to oversee the war from there but by this time it was already too late.

The son of Bada Kaji, Ram Das Thapa, and the son of British commander Colonel David Ochterlony had established the relation of mit, friendship. Thus Bada Kaji and Ochterlony were also close to each other.  The British side could gain a lot of military secrets from Nepali side by virtue of Ochterlony’s son’s miteri relation with the son of Amar Singh Thapa. Even while the British had literally put Malaun under siege from all sides, Nepali side could not launch spoiling and counter attacks because the troops on the ground had not been issued order by Bada Kaji.

This made Bhakti Thapa angry. Thus Bhakti Thapa, evading the British positions from Suraj Gadh, walked up to Malaun fort to meet Bada Kaji in the middle of the night. Bhakti Thapa and Amar Singh Thapa were samdhis (relatives by marriage of siblings). Bhakti Thapa, during the discussion, insisted that Malaun fort should be saved even for the glory of Nepal.  Both agreed that Bhakti Thapa would lead the command and attack at the installation of British troops and its cannon position in the daybreak the next day.

It is often said that Nepali troops numbered at 2000. But the fort of Malaun is such that not even 500 troops can be stationed there for there are cliffs all around the battle point. So on the morning of April 16, 1815, under the command of 73 years old Bhakti Thapa, Nepalis launched attacks at cannon's position of the British troops, 300 yards east on the Malaun fort. On the first attack, many Nepalis were killed. So happened in the second attack too. By the time of third attack, it was already 10 in the morning. By then, many Nepali troops, including the 73 years old warrior Bhakti Thapa, had lost their lives. While this was happening, Bada Kaji Amar Singh Thapa, his sons and his family were watching it from the fort of Malaun.    This incident deeply agitated Nepali troops and they started to point to the negligence by Bada Kaji for the death of Bhakti Thapa.

For some strange reason the British side ceased war for 24 days.  But then on May 10, 1815, they reopened huge cannon firings against Malaun fort.   In the meantime, Bada Kaji sent his son Ram Das to meet Colonel Ochterlony and also to send the proposal of agreement. Accordingly, an agreement was signed on May 15, 1815, whereby Nepal ceded all the lands east to Sutlaj up to Mahakali River to British India.  But much earlier to this date, Nepalis had already given up on Kumaun region and reached east of Mahakali River.

The battle of Malaun has left many unanswered questions regarding the role of Bada Kaji Amar Singh Thapa. First, Captain Balabhadra Kunwar was the grandson of Bada Kaji Thapa from his daughter. Under Balabhadra there were almost 500 troops at Nalapani. Bada Kaji knew that British were numbered at above 5000 in strength. Why did Bada Kaji not send the reinforcement on time?

Second, the British were attacking the Nepali troops at Nalagadh-Ramgadh-Bilaspur areas and thus moving forward. But the Bada Kaji did not issue an order to Bhakti Thapa to start the operation on time. Why? Third, Malaun fort was already under siege from four sides. Why were troops inside the fort not ordered to launch spoiling attacks against the British troops outside? Why were they asked to open fire only after Bhakti Thapa went to Malaun from Suraj Gadh in fury to remind the urgency of the situation? Fourth, none of the young sons of Bada Kaji went to fight the battle with Bhakti Thapa. Why?

Fifth, in the early morning operation, a number of Nepali warriors died in every attempt of attack. Even Bhakti Thapa was martyred.  Why did Bada Kaji not go to the battlefield himself? He was much younger to Bhakti Thapa in age. Why did he not send the reinforcement? Why did he and his family just watch the bloodshed from safer area?

Bada Kaji lost the war for Nepal and surrendered. Why was he given cannon salute by the British? Why did the British return all his properties and give them the family hospitality? Why did they exchange gifts?

Many of Bada Kaji's sons did not return to Kathmandu. Instead they took away with themselves the goods, cash and properties from Malaun and migrated to Lahore of Punjab. Why did they do so?The questions raised above are crucial questions of history and those questions need to be answered. Yogi Narahari Nath in Itihas Prakashma Sandhipatra Sangraha has unraveled many aspects of these questions.

Bhakti Thapa died on the battle field and exhibited great valor, for which he will be remembered forever. The British also praised him for bravery, loyalty and dedication. But can we say the same thing about Bada Kaji Amar Singh Thapa? There is a lot to reconsider before we jump to the conclusion.

Sindhuli Gadhi: History that deserves to to be remembered

Sindhuli Gadhi, a glorious fort in Sindhuli district, is of huge historical importance because of the famous battle of November... Read More...