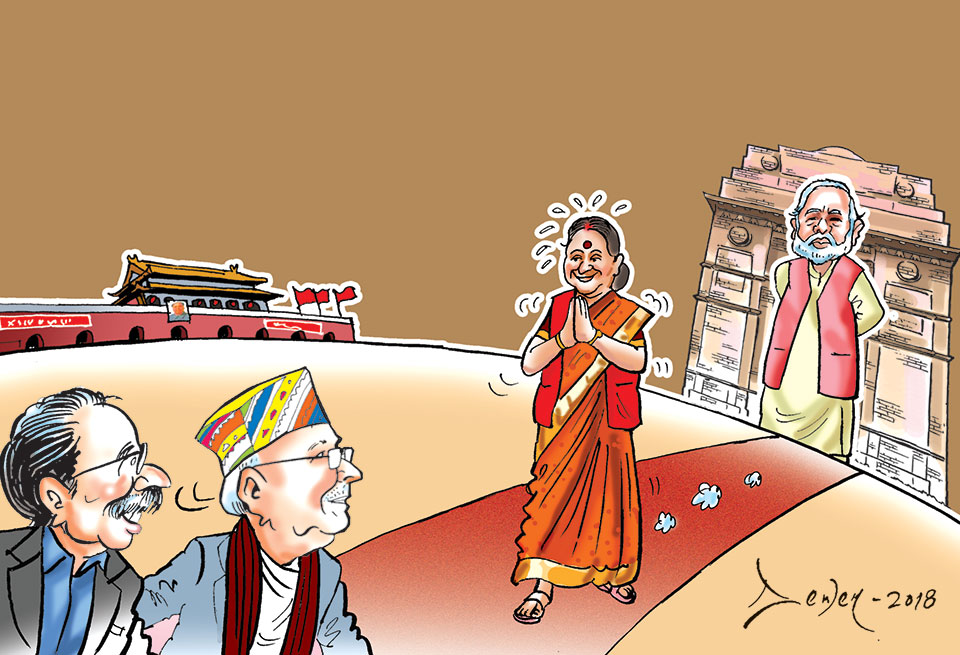 History shows if there is one thing India does not like, it is Nepal getting close to China. That’s a big problem, this lens should change.

I will come to the subject matter in a while. Let me begin with Nepal’s reaction to Indian Minister for External Affairs Sushma Swaraj’s recent visit to Kathmandu as a special emissary of Prime Minister Narendra Modi.

Many reacted rather thoughtlessly. This group tends to blame India for almost every wrong. According to their interpretation, the left alliance has not been able to form the government because India has not allowed to, or Sher Bahadur Deuba, in collusion with India, is conspiring to prevent CPN-UML from coming to power. There are reasons for such reactions but majority of Nepalis, including commoners, subscribe to this view.

Others oppose India based on issues. This time around many said Sushma Swaraj should not have come to Nepal at this hour when the new government is yet to be formed. She should not have treated UML chief K P Oli as ‘prime minister’ while giving little value to sitting PM Deuba. The debate is over whether ‘one-on-one’ meeting between Oli and Swaraj without attendance of Nepal’s foreign ministry officials was right.

The third type of reaction needs to be analyzed in a context. While left alliance leaders see nothing wrong in Swaraj coming to Nepal at this hour and Nepali leaders meeting her, some Nepali Congress leaders booed Oli and left leaders on social media.

Bishwa Prakash Sharma, spokesperson of Nepali Congress, mocked Oli on twitter: “I don’t say you have come out of the veil of ultra nationalism in lizard’s avatar. But if Congress had done what you did, I don’t know what you would have said, Mr Oli.” Another prominent Congress leader Dhan Raj Gurung wrote, “Oli sacrificed his nationalism at the feet of Swaraj at Soaltee Hotel. What a pity,” (translation mine). “MASTERSTROKE: One extra phone call and a 20 hour visit dissolved 2 years of ultra nationalism and 5 years of geopolitical pressure,” added Govinda Raj Pokharel, former vice-chairman of National Planning Commission and former CEO of National Reconstruction Authority who lost the parliamentary election.

The tone was taunting: You fake nationalist. We saw you surrender. And it reeks of whiff of self-aggrandizing attitude as well: You claimed to be a bastion of nationalism, now you are bowing down.

Generally what one says in social media is a private matter but it is meaningful here because it comes at a time when some of Congress leaders have attributed party’s loss in the election to its inability to speak up against Indian meddling in constitution process and blockade of 2015.
Oli’s test has started before becoming the PM. From now on he will be under constant gaze from the opposition party in his handling of relation with India. Congress might project UML as surrendering to India if Oli is seen to do anything that benefits India more than Nepal.

Then there are permanent defenders of India. They don’t see blockade as a blockade and justify everything and anything India does in Nepal. But there are also those who critically appreciate India. They argue that we should keep best of the relation with India but not at the cost of our own existence and independence. They opposed blockade in the strongest terms. They oppose when India is seen to interfere in domestic affairs. The opportunists flatly dismiss them as “anti-India” or ‘pro-China” to impress on New Delhi that they are the only ones whom New Delhi should listen to.
This background is for Nepal watchers. Just like India is not a monolith in terms of Nepal, people in Nepal also respond to India in more ways than one.

Issues and interpretations
Since Swaraj held ‘one-on-one’ meeting with Oli, the details of what transpired in the meeting have become subject of speculations and interpretations.  Why did Indian PM send her here at this hour? Was the visit only meant to improve relations with UML? What does India want in Nepal now? Is it restoration of Hindu state? Was she here to stall unification process of UML and Maoist Center? Is India really concerned about Nepal’s stability, development and prosperity?

The visit was keenly watched because she brought along with her memories of blockade as well. With her acknowledgment of three sets of elections as ‘milestone,’ and constitution amendment as Nepal’s internal matter, has India finally given up its stand on constitution?

Answers to these questions vary. But it is widely believed that one of the agendas of the visit was to seek assurance from new regime that Nepal won’t get closer to China in the days to come. If so, that would be asking for too much.

First, everyone is watching whether Oli’s government will work to materialize trade and transit agreements signed with China during his first premiership in March, 2016. Whoever succeeds Deuba will be watched in this respect. Before the blockade, China as an alternative route to Nepal’s trade had not crossed imagination of Nepali people. Now they know China is no alternative to India but they also know trade and transit through China is possible.

No prime minister in Nepal can ignore this reality. Even Pushpa Kamal Dahal, who got Delhi’s support, could not ignore the call. His government signed Belt and Road Initiative (BRI) agreement with China, despite India’s overt dissatisfaction.

If Oli fails to do anything about implementing the deals he signed with China and work for greater connectivity with China, he will become subject of criticism not only from Nepali Congress but also general public. But here is a catch. History shows if there is one thing India does not like, it is Nepal getting (or seen to be) close to China. That’s a big problem. This faulty lens should change.

China card
India has made Nepal’s relation with China one of the bases to conduct relation with Nepal. Whenever Nepal has got close to China, India has accused Nepal of using ‘China card’ against it, become unnecessarily suspicious and has gone to the extent of imposing blockade.

India imposed trade blockade on Nepal after Nepal signed Kathmandu Kodari Highway agreement in the early 60s. India had pressured Nepal not to construct the highway. When in 1969, government of Nepal removed Indian military missions, in what India interpreted as something done under China’s behest to give greater leverage to China, another blockade followed. In 1989, when Nepal bought antiaircraft guns from China, India imposed the longest economic blockade.

The 2015 blockade may be the exception to this pattern but here is a visible corollary. Indians were comfortably watching Nepal suffer for more than a month. Only when in October, Nepal Oil Corporation (NOC) and China National United Fuel Corporation formalized an agreement to import petroleum products from China and when tankers filled with China donated oil started to come to Nepal, the blockade became the subject of national debate in India. In December, Sushma Swaraj had to address Upper House, defending the Indian position. India turned soft only when opposition leaders there started to warn that using coercion further could push Nepal completely to China’s arms.

China and the world
It is difficult to comment on China for outsiders but based on what the western world and even India is reporting, it can be concluded that China is rising in a big way, whether we like it or not. Forbes predicted in 2016 that by 2018, China’s contribution to global GDP will surpass that of the US, making China’s economy more significant than America’s.

David Ignatius wrote in The Washington Post that China is in “quiet but relentless pursuit of becoming a global superpower.” The Times of India reported this week that “the poorest Chinese are twice as rich as the poorest Indians and country’s income disparity is much less than that of India. America is the worst, its poorest are actually getting poorer over time.”

In November last year Time magazine devoted its front cover to China under the title “China Won.” One may dismiss these reports as generalization but the world seems to be acknowledging China’s rise.

As an aspiring global power, China will surely expand all types of cooperation with countries in the world including Nepal and India. How to deal with such China is a big question. Each country will have to devise its own strategies.

Whether greater cooperation and connectivity with China will help Nepal and how is yet to be seen. But general impression here is that it will benefit Nepal. This impression has become entrenched in Nepali psyche after the blockade. Rest assured, Oli can become soft towards India but he won’t be able to ignore China either.

Modi is reportedly going to visit Nepal sometime in the future. If he sets Nepal not becoming close to China or any other country as the condition for India’s engagement, he won’t be welcomed. If India decides what to do with Nepal based only on whether Nepal is close to or far from China, it will take us nowhere.

The idea of ‘China card’ or ‘India card’ has become obsolete. It is time to think of the alternative.