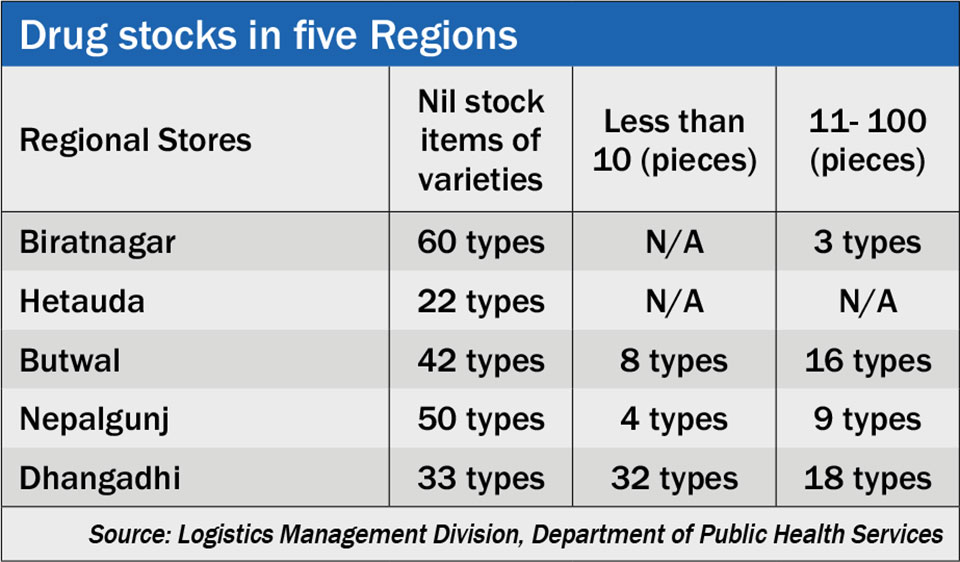 KATHMANDU, Feb 1: The stocks of up to 60 drug varieties and medical items at the government's  regional drugs storages are currently nil. However, the government is yet to make the drugs purchases for this year. Last fiscal year, the Department of Public Health Services (DoPHS) procured drugs worth only Rs 490 million out of the Rs 1.10 billion allocated for the purpose.

The 60 items that are nil in stock include medicines such as ORS, antibiotics, medication for  leprosy and tuberculosis, ointments (also creams and drops), IV Solution, oral solids (tablets and capsules), oral liquids (syrups/susp/sprays), and items such as cold chain accessories, syringes, surgicals and family planning items .

Govt purchased drugs worth only Rs 490 million out of Rs 1.10 billion allotted for the center last fiscal year. No purchases yet by the center in the current fiscal year that began mid-July

The government purchases 72 kinds of essential drugs and items for distribution free of cost through its health facilities. All the items unavailable at the regional stores are among these 72 essentials. According to the Primary Health Care Revitalization Division (PHCRD) under  DoPHS, the government has allocated a total of Rs 1.5 billion in the current fiscal year for the purchase such essential medicines that are to be distributed free.

"We allocate 30 percent of the budget meant for drug purchases to the regions (provinces) and districts. They buy the drugs as per their needs," said Bhogendra Raj Dotel, director at  PHCRD. " LMD procures the medicines out of the 70 percent allocated for the center," he added. "We just release the budget to  LMD."

The procurement of essential medicinal items in the current fiscal year was a delay due to frequent changes in government and national and local level elections, said Babu Ram Lamichhane, undersecretary at  LMD. "We have begun the procurement process for 16 essential drugs this year and are going to procure another 16 essential drugs soon," he said. "We can supply the medicines to the government facilities only in April. Until then, the local and regional bodies should manage  with the budgets allocated for them."

Items that are low in stock

INFOGRAPHICS: Nepalis affected by COVID-19 throughout the world
20 minutes ago