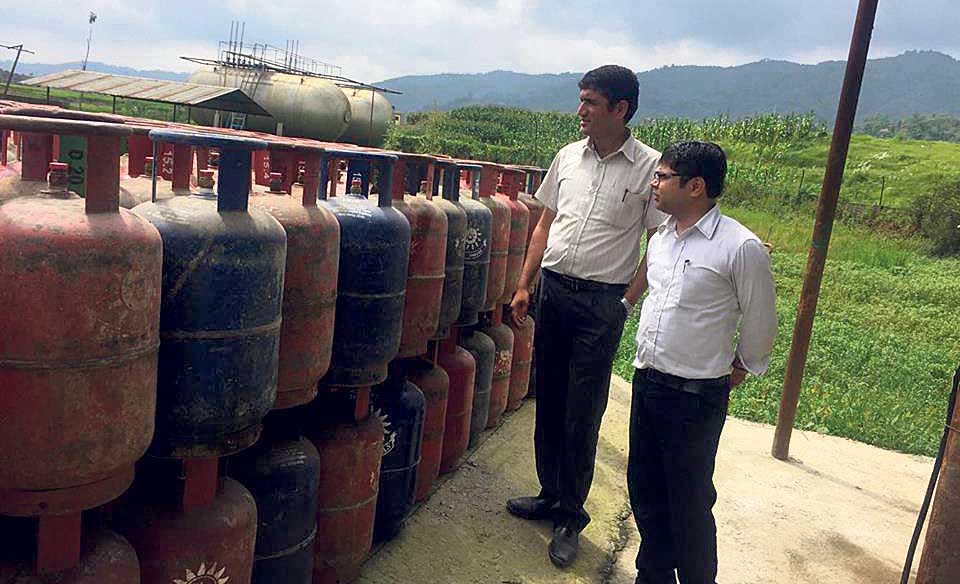 KATHMANDU, Jan 20: Liquefied Petroleum (LP) gas bottlers are on track after an aggressive raid by Nepal Bureau of Standards and Metrology (NBSM). The bureau had introduced Nepal Standard (NS) 533 2070BS to be acquired by gas bottling plants as a government certification for the bottling process in those plants, but the bottlers had been citing costliness of the certification process to avoid it.

The number of applicant bottlers for the NS has increased to 50 on Friday, compared to nine applicants as of December 27.

Republica had covered the issue about reluctance of LP gas bottling plants towards the NS 533 standard on December 27. Four plants had acquired the standard then, while the number of applicants was just nine.

After that NBSM had raided three gas plants of Banepa -- Chandeshwori Gas, Surya Gas, and Sagarmatha Gas -- on January 5 and decided to take action against them. NBSM has been saying that the regulation regarding the NS standards are for safety of the gas plants, plant workers, and the consumers using their gas products. According to the NBSM officials, the raid pulled most of the bottling plants under the NS regulation.

“Our raid in gas bottling plants of Banepa had a positive impact over bottling plants across the nation. Now almost all the LP gas plants are on the process of acquiring NS 533 certification,” said Romi Manandhar, deputy director general of NBSM. “The standardization validates the safety of the LP gas products of the gas plants. So, the response from them is a positive indicator for safety of LP gas in Nepali kitchens.”

Nepal LP Gas Industry Association (NLGA) -- the umbrella body of gas bottlers in Nepal -- had said earlier that the bottlers did not want to acquire NS 533 as the process of acquiring the standard was too expensive. However, the officials of NLGA have termed the recent flow of application for NS 533 from bottling plants as a ‘way of saving LP gas business’.

“We had to go for the process of acquiring after the NBSM planted fear among the consumers saying that gas cylinders from bottlers without NS 533 are unsafe. We had to apply for the standard to save our businesses,” said Gokul Bhandari, president of the association. “We are still saying that the NS acquiring process is costly. It needs to be made affordable.”

NBSM has been providing standardization for cylinder, regulator, and valves since long. Recently, it has started providing standardization for gas products as well. NS 533 certification is provided to gas bottling companies, but it is not marked in the cylinder. It implies that one cannot know if the gas from the company is standard or not from the containing cylinder.

Nepal Standard 533 (NS 533) 2070 BS has been declared mandatory by the government for LP gas bottling plants.

NBSM gives the NS 533 certification to bottling plants after inspecting the safety, security and technical aspects in the process of receiving the LP gas, filling, handling and storage of the cylinders, and delivery of the gas. This means the standard qualifies the whole procedure starting from gas import to delivery to consumers.

NBSM officials also said that two inspections are carried out before giving the NS 533 standard certificate, the later one as verification, and after giving NS certification, annual monitoring is conducted to check if the standard is maintained or not.

Not having a regulatory government body dedicated to the petroleum (gas and oil) has emerged as a serious hurdle in recent days. State-owned Nepal Oil Corporation (NOC) is more a business body than a regulator. The NOC supplies LP gas to the bottlers.

Gas bottlers are also not following legal provisions like LP Gas By-laws, which says that gas plants should be at least five kilometers away from human settlements and also away from each other.

KATHMANDU, Dec 27: Only four out of 55 Liquid Petroleum (LP) gas industries in the country have received quality certification from... Read More...