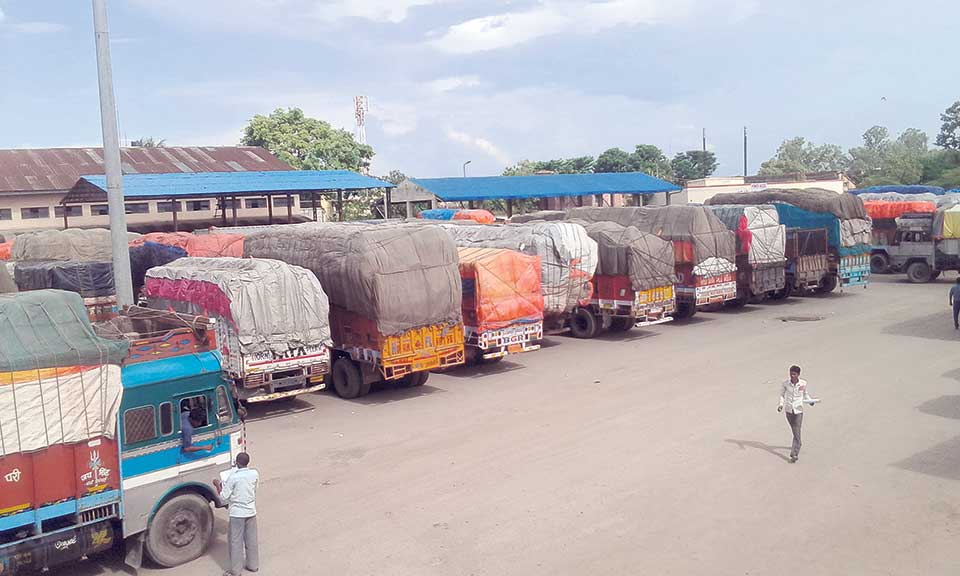 Cargo vehicles are seen parked at the customs yard of Biratnagar Customs Office in Biratnagar in this recent photo. Photo: Ajit Tiwari/Republica

BIRATNAGAR, Jan 18: Revenue mobilization by the Biratnagar Customs Office, which was affected due to collapse of a bridge in bordering India due to August floods, is finally coming back on track.

Revenue collection from the customs office slowed in the first two months of Fiscal Year 2017/18 after movement of cargo vehicles was affected due to collapse of Mirgunj Bridge on the Jogbani-Bathnaha road, a key trade route, in India.

Because of the bridge collapse, cargo vehicles had to be re-routed, causing slowdown in revenue mobilization.

The customs office mobilized total revenue of Rs 13.83 billion over the first six months of FY 2017/18 which ended in mid-January, 2018. The office had set a target of collecting Rs 14.37 billion in the six-month period.

Customs officials say revenue collection was affected because of the bridge collapse in India. “We could mobilize only 96 percent of the targeted revenue because the obstruction in trade route due to bridge collapse hampered revenue collection in the first two months of current fiscal year,” said Mimamsha Adhikari, chief of Biratnagar Customs Office.

“However, the collection rebounded in the latter four months.”

The customs office could collect only Rs 1.7 billion of the targeted Rs 2.2 billion in the first month of FY 2017/18, while collection in the second month stood at Rs 1.87 billion compared to the monthly target of Rs 2.49 billion, statistics of the Biratnagar Customs Office shows.

The office, however, met the revenue target in the latter four months. In the third month of FY 2017/18, the office collected Rs 2.52 billion against the target of Rs 2.18 billion. Similarly, in the fourth month, it mobilized Rs 2.7 billion even though the target was only Rs 2.49 billion. Revenue collection surpassed the target in fifth and sixth months as well when the office mobilized Rs 2.50 billion and Rs 2.52 billion, respectively. The target for both the months was Rs 2.49 billion.

Though the Mirgunj Bridge has come into operation after repairs, it supports movement of vehicles of only 20 tons.

RASUWA, July 21: The Rasuwa Customs Office in Timure has doubled the revenue collection in the outgoing fiscal year compared to... Read More...

Let's not overshadow the issues that Prem Archaya tried to raise: Dr Toshima Karki
56 minutes ago