Farmers spill milk on road to protest against DDC 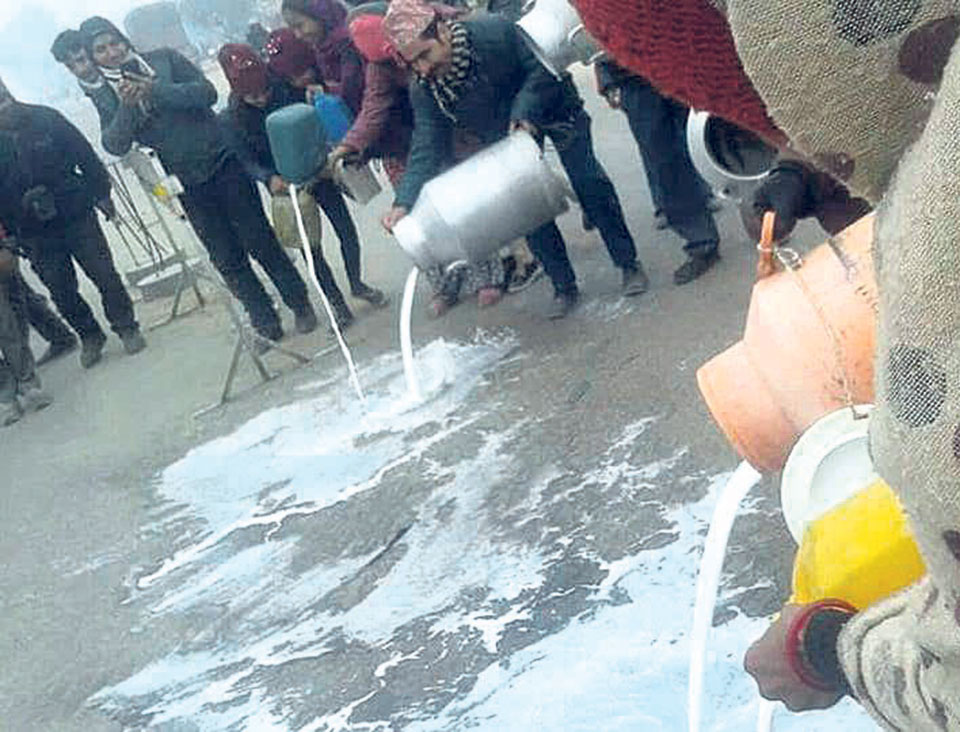 TIKAPUR, Jan 9: Farmers of Lamki of Tikapur spilled milk on the street on Monday morning as part of their protest against Dairy Development Corporation (DDC).
The farmers took to the street by spilling 50 liters of milk on the road after the DDC stopped buying milk from farmers.

Indra Devkota, a dairy farmer of Lamki, said DDC had shown reluctance to purchase milk from farmers since September, 2017. It stopped purchasing milk from December 31, 2017, he added.

“We have started buffalo farming taking loan from banks and financial institutions. How are we are supposed to pay back our loan now? How can we learn livelihood,” Devkota said.
Devkota is not the only one. Many farmers from Lamki, Bauniya, Pratappur, Chuha and Pathraiya are facing this problem. Farmers are facing financial crunch as they are not being able to sold milk produced in their farm.

The state-owned dairy producer has provided only one tanker having capacity of 4,600 liters for Attariya-based Dhangadi Dairy Project. This is the only tanker to collect milk produced in all the districts of Province 7.

The chilling center also doesn't have needful infrastructure to store milk. Though the store has storage capacity of only 1,000 liters, it current has 3,500 liters of milk in stock. “We have sufficient milk in stock. But we have not able to supply it to other districts because of transportation problem,” he said. “In such situation, how can we buy milk from farmers?”

Meanwhile, the farmers have also asked the government to pile pressure on DDC to purchase milk from them.

Consumer price of milk hiked by Rs 9 per liter

KATHMANDU, May 25: The Nepal Students' Union which had gathered at Exhibition Road to protest against inflation took their time... Read More...