Per capita income highest in Province 3, lowest in 7 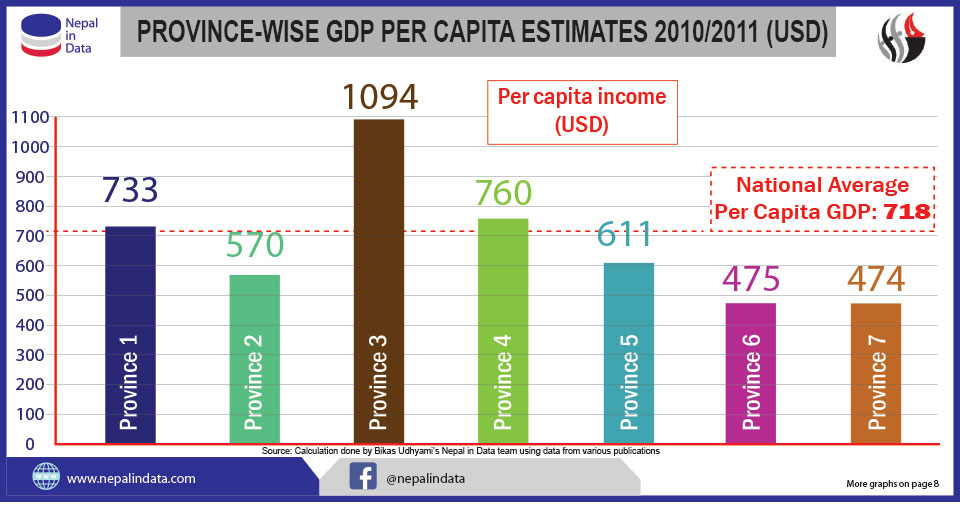 KATHMANDU, Jan 9: A person living in Province 3 earns more than roughly twice as much as someone in Province 6 or 7, according to an analysis of government data on per capita income done by Republica.

The analysis is based on  province-wise data compiled from various sources by Bikas Udhyami, a not-for-profit organisation that has launched an initiative titled 'Nepal in Data' to make Nepal's development data easily available  through its www.nepalindata.com portal.

There is a yawning gap amongst the provinces  in respect of per capita income and availability of goods and services. The GDP of each province and their contribution in 15 sectors (see infograph) are derived from statistics in the Human Development Report 2014 (which in turn  is based on  2011 data) and other government reports.

The data shows that a person in Province 3 has an average annual income of US $ 1,094 and dominates all the other regions in almost every development indicator. This is the most recent GDP data available and it has been computed by district.

The data can be an eye-opener for policymakers and planners, who will be struggling to narrow down the income gaps as per the federal setup under the  Constitution of Nepal 2015. According to the data, the average annual per capita incomes in provinces 5 and 6  are only US $ 611 and 475 respectively. Province 7  has the lowest per capita income, at US $ 474.

Province 4,  the center of much tourism activity, is a distant second with an income of US $ 766 per year . Likewise, provinces 1 and 2 are in third and fifth position respectively, with  annual incomes of US $ 733 and US $ 570 respectively.  Province 5 ranks fourth.

PROVINCE 3 LEADS IN 13 OUT OF 15 SECTORS UNDER GDP

Province 3 leads in 13 sectors under GDP, while provinces 1 and 2 lead  in agriculture and forestry  and in fishing and manufacturing  respectively.

Province 6 contributes the least in all 15 sectors. However,  provinces 6 and 7 have an equal contribution in three sectors: manufacturing; transport, storage and communications; other community, social and personal service activities.  Province 7 is the second lowest contributor in 13 sectors.

Province 3 contributes a third (32 percent) of total GDP. It takes the combined value of the goods and services produced in provinces 1 and 2, which  contribute 17 and 16 percent respectively, to nearly  equal that of Province 3.

The conclusion is  that almost all  goods and services have been focused in Province 3 where the capital city is located. "Such goods and services should be distributed to all the provinces based on the potential of each province to harmonize GDP contribution and  overall development in the new federal setup," said Suman Aryal, director general of the Central Bureau of Statistics.

POKHARA, June 8: Province 4 has set its target of increasing the per capita income of its denizens to US$ 2500.... Read More...

Karnali aims at increasing per capita income to USD 2,100

SURKHET, June 10: While publicizing the development policies and programs for the upcoming fiscal year, Karnali Province on Saturday announced to... Read More...