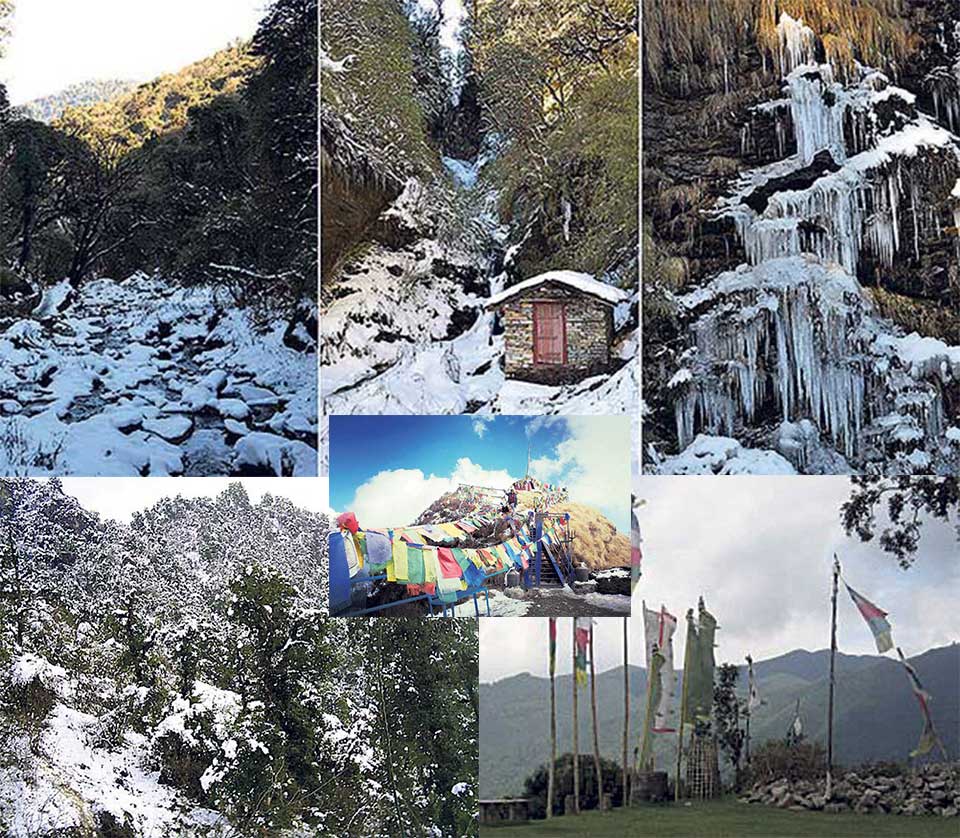 Building a snowman and having a snowball fight are what we often find ourselves wistfully dreaming of when we see pictures of our friends and family settled in places where snowfall is common during winters doing just that. When occasionally there is snowfall in a few places in Nepal, we all tend to flock there to have some fun in the snow. The Week, with the help of PAS Tours and Travels in Lagankhel, Lalitpur, lists down a few places where snowfall is quite imminent in the winter season. Maybe, the next time we hear of snowfall in Nepal we can take a pick from one of these fascinating places according to what suits our travel needs.

Poon Hill
Poon Hill in Pokhara is on almost every trekker’s bucket list in autumn and spring but it is rarely a destination people head to for snowfall. Poon Hill gets hundreds of trekkers every year and the highlight of the trip is the panoramic view of magnificent peaks including the Annapurna range, Mt. Macchapuchre, and Himchuli to name a few. You will also get to witness the various terrains of Nepal as well as experience the diverse culture of people with their unique lifestyles inhabiting in the different regions throughout the trek.

You will need at least five to six days for this trip. The trails are covered in snow only at Ghorepani village that lies at the base of Poon Hill. People who have been there during the winter season say it feels like they are actually touching the mountain along the way. However, with snow on the ground, trekking might be a little risky and you are advised to be careful.

Phulchowki
Situated just a mere 20 kilometers away from the city center, Phulchowki is the nearest destination for Kathmandu residents to cavort in the snow. Being close to Kathmandu, there will be very less snow here though and it will last only for a couple of days on the northern side of the hill. So, as soon as you hear news of snowfall, get your hiking gears ready.

Phulchowki, being the highest point of the hills surrounding the valley, is a popular travel destination for a short one-day hike and nature tours as well. After you reach Godavari, you will just have to walk for four hours through dense sub-tropical forest to reach the Phulchowki hill. Here is the shrine of Phulchowki Mai and you can get an eagle-eye view of Kathmandu valley. From here, you can also enjoy viewing the spectacular Himalayan ranges. While making the return trip, you can also explore the Godavari Botanical Garden at the foot of the hills.

Shivapuri
Shivapuri, another hill station of Kathmandu, is a one-day trek that passes via Budhanikanatha Temple. If, during spring the hill looks resplendent with blooming rhododendrons, in winter it’s even more majestic with clear views of mountains and snowfall. Among all the places starting from the foot of the hill to the peak, it is more likely to snow in the origin of Bagmati River, Bhagdwar. Snowfall can occur randomly during the winter months so make queries and find out if it’s cold enough for snow before you go.

Kalinchowk
For someone who wants to go a little beyond Kathmandu to enjoy snowfall this season, Kalinchowk is the perfect destination. It is just 135 kilometer away from the capital city. Along with the snow, the altitude of 3842m above sea level makes it perfect spot for stunning views of the surrounding hills and mountains. Kalinchowk is said to be one of the safest routes in Nepal to experience snow. However, during the hike, it’s better to stick to prominent trails and avoid straying into the woods. This way you are less likely to miss important and interesting stops. Make a travel itinerary of three days for a perfect trip.

A six-hour drive from Kathmandu via Kuri bazaar and Charikot followed by a five-kilometers long hike will get you to Kalinchowk. At the top towards the northwest end of the valley, stands the temple of Hindu Goddess, Kalinchowk Bhagwati. The temple is also regarded as one of the most famous pilgrimage sites for Hindus. From the temple, on a clear day, you will be able to enjoy stunning views of several mountains like Ganesh Himal, Shisha Pangma, Langtang, and Gauri Shankar.

Daman
Daman is a small village in Makwanpur district. Located just 75 kilometers southwest of the capital, it is about half way to Hetauda. Of late, Daman has become one of the most popular tourist attractions of central Nepal. From here, you can enjoy an alluring stretch of Himalayas on a cloudless day. Other than that, you can also witness crystal clear waterfalls, water springs, and green hills that are sure to put your mind at ease.

Heavy snowfall in Daman is what also attracts many local tourists every winter. Being situated at an altitude of 2322m above sea level, it is very likely to snow in Daman every year during the winter seasons. You can either take a bus from Kalanki or hike through Pharping to reach Daman and enjoy the snow this season.