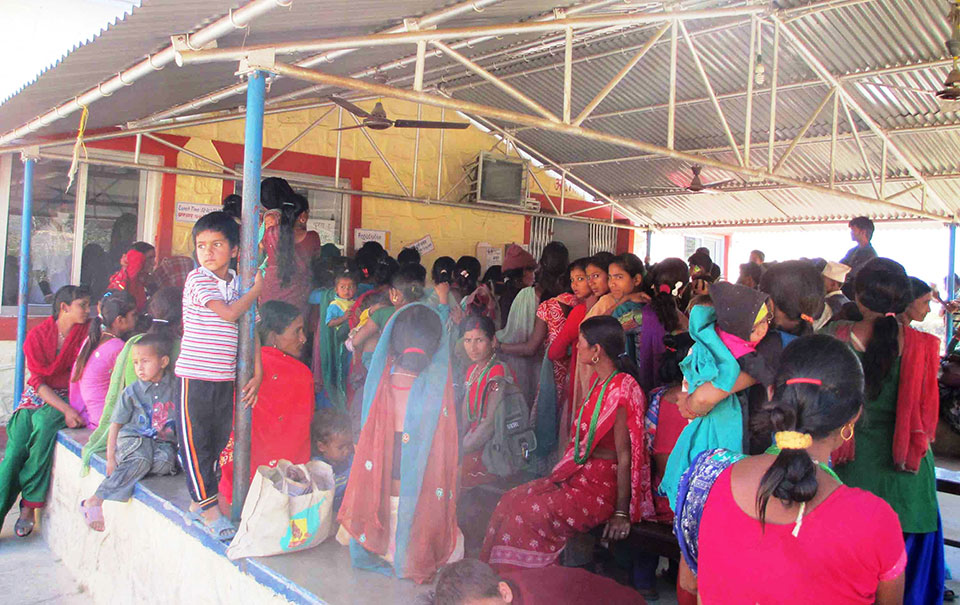 ACHHAM, Jan 1: The minimum age for marriage in Nepal is 20 for both men and women. The body of women below that age is not considered to be fully prepared to give birth to babies. However, in this part of the country, early marriage, which is also called child marriage is going on abated. Doctors claim that early motherhood coupled with lack of proper care and food has been forcing many women to live life with the prolapsed uterus.

“Prolapsed uterus is common in Achham,” said Dr. Prabhat Rimal of Kohalpur Medical College. “Not only married but even unmarried girls and women have shown symptoms of a prolapsed uterus,” he said adding that it “is due to lack of care, nutritious food and proper forms of exercise.”

Not only married but even unmarried girls and women are suffering from a prolapsed uterus.

Jamila Saud of Mallekh village is one of the dozens of women living with a prolapsed uterus. She is 18 and is not married. The doctor says that her case has been complicated because of the delays she made in taking medical help.

Like others in the society, her family considered prolapsed uterus as an 'illness of married women' and her medical condition has surprised the family. Because of the existing notion, unmarried girls like Saud are seen by the society in a negative light. Eyebrows are raised.

The doctor says that such notions are not true at all and claims that even an unmarried can be a victim of the disease. “One of the major factors for women suffering from the condition is lack of awareness. Saud's uterus had an infection just when she was 16 and since the infection was not treated it begun to fall,” Dr. Rimal said.

As her illness began to complicate, Saud had sought for check up in a health camp organized by the district hospital in Achham. But at the camp, she was denied treatment stating that camp was meant only for married women. “They then suggested me to go to Kohalpur,” Saud said.

Saud has a very poor health, says Rimal. Due to the lack of proteins and vitamins, she is developing even other health problems.
“It is basically due to the lack of nutritious food. Apart from this, the girls here do wrong physical exercises. They work hard but in a harmful manner,” he explained.
Saud recalls her childhood. She always carried a heavy load on her back. That was her part of household duty.
“I had to carry water pot and other loads on my back,” she said. “I had to work extremely hard when I was a child. And later, that only got intense,” she added.

She does not exactly remember since when she started feeling pain in her lower abdomen. Though it was getting severe she hesitated to reveal it to others. “I had a hard time discussing it with my family members. But now the doctor says I should have come here much earlier,” she said.

Dhansara BK, 21, of Mangalsen was married at 15 and is a mother of three children. She is also suffering from a prolapsed uterus and the case has become so much complicated that the only to relieve her is to remove the uterus.

All her three children were born at home. She says that she is very nervous about the illness and the future of her children stating that they are too small to do on their own.

BK had also experienced a problem with her uterus many years ago before she visited the doctor. She had felt very uncomfortable when her first child was in her womb. She was just 16 then.
Since she had given birth at home, she had no idea she had a prolapsed uterus. “I had no idea that I needed to tell this to others or go to the hospital,” she said.
Now, after giving birth to more children, her uterus has become totally 'useless'.

Her condition is so critical that she cannot even move around easily. The district hospital had referred her to Nepalgunj Medical College, suggesting that she should seek medical attention immediately and have the uterus removed. “They told me that I need to do surgery as soon as possible. But I had to wait,” she says.

BK wanted to wait for her husband, who was out of the village, to come back home. Taking the bold decision without asking him was not easy for her. “I do not know what caused this severe problem in my health. When I ask the doctor, they say that I did not eat good food when I was pregnant. It was important to rest too, they say,” she narrated.

Dr. Rimal urges for strategic intervention from the authorities concerned to address the problem. Meanwhile, Jhapat Dhungana, monitoring officer of Public Health Office cited hesitation among women as the biggest reason for their health getting worse. “They hide until it becomes severe. It is really a huge problem,” he said.

BAJURA, Feb 20: Many women in rural parts of Bajura district, who were suffering from uterine prolapse for long, have benefited... Read More...