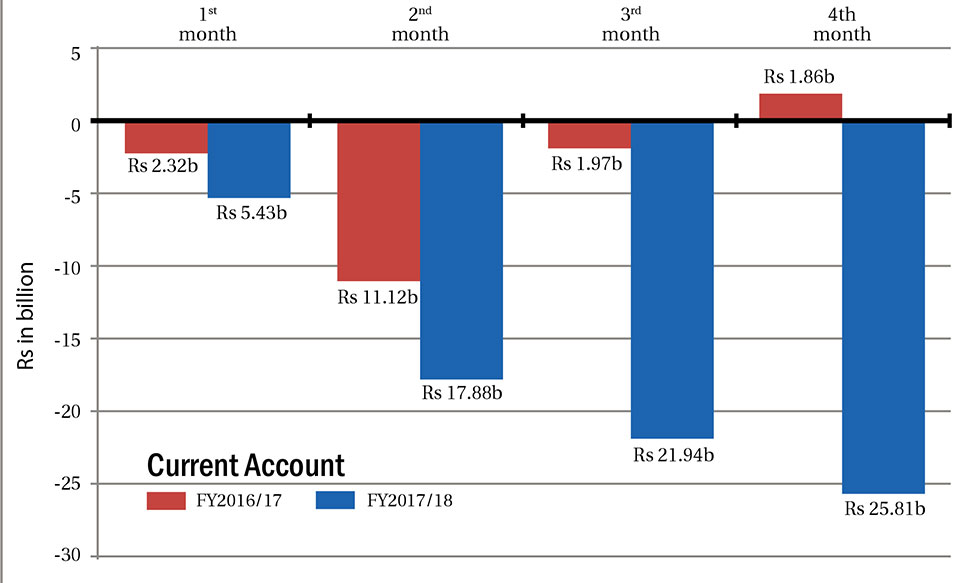 Officials say they will take needful measures to address the issue.

Current account, which measures country's transactions with the rest of the world, saw a record deficit in the review period. Alarmed by the continuous rise in current account deficit, government officials say that they are mulling over taking steps to address the problem.

The current account was in surplus of Rs 1.86 billion in the first four months of FY 2016/17 that ended in mid-October.

“Decline in remittance inflow and import of goods like vehicle, motor parts and fuel are the major reasons behind rising current account deficit,” said finance secretary Shankar Adhikari. “It can be a short-term phenomenon due to election,” he added.

Remittance flow decreased by 1.4 percent to Rs 228.95 billion in the review period in contrast to a 7.8 percent growth in the same period of the previous year.

Merchandize imports, mainly petroleum products, MS billet, and vehicle and spare parts, have been rising continuously for the past many years. Import growth surprisingly moderated by 10.8 percent to Rs 334.31 billion in the review period compared to a whopping 87.4 percent growth in the same period of FY2016/17.

The BoP remained in surplus in the review period as there has been an improvement in the flow of foreign investment in the country. "Nepal received capital transfer amounting to Rs 6.42 billion and Foreign Direct Investment (FDI) inflows of Rs 10.17 billion in the period,” according to the central bank.

Adhikari said that the ministry was closely studying the scenario and take prompt action for bringing more remittance via banking channel as well as to reduce import of vehicles which has also has prompted a rise in fossil fuel consumption,” he added.

Petroleum import saw a growth of 40 percent to Rs 40 billion, while import of vehicle saw a rise of 12 percent to Rs 34 billion in the first four months of Fiscal Year 2017/18.

NRB officials, however, say that there was nothing to worry as import of construction inputs like cement, rod, aluminum bars, cold-rolled sheet in coil, MS billet and MS rods is a reflection of growth in construction activities.

KATHMANDU, June 11: ​Sharp rise in import bills has pushed the current account deficit to a new low in the tenth... Read More...