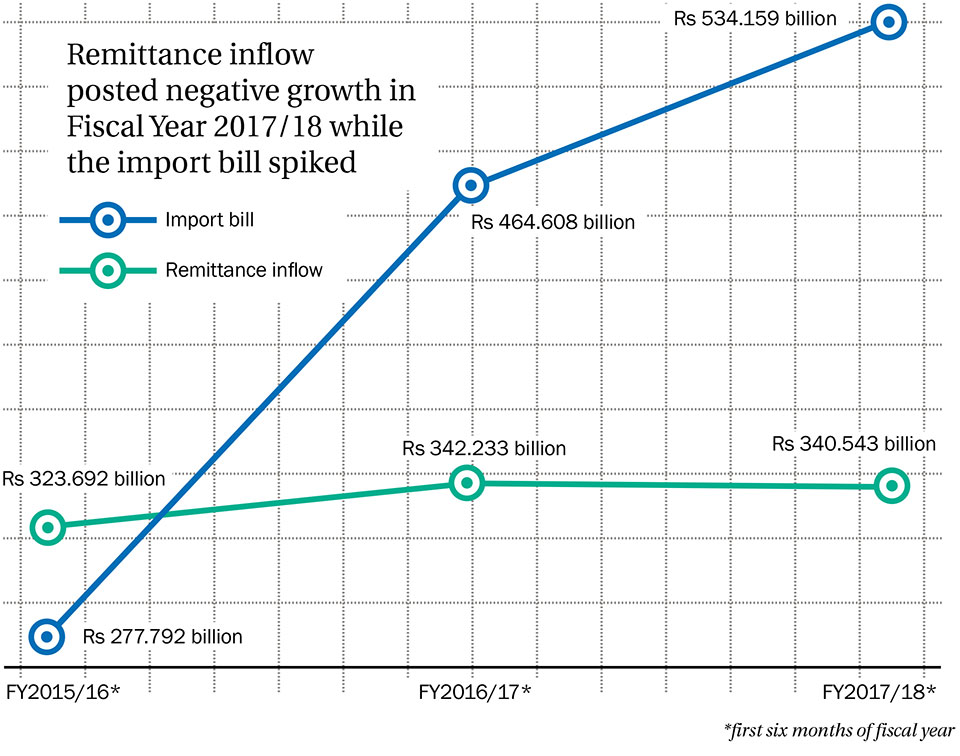 KATHMANDU, Feb 13: Nepal's balance of payment (BoP) slipped into a deficit of Rs 6.66 billion in the first six months of Fiscal Year 2017/18, meaning that outflow of money from the country is higher than what the country is earning.

The Current Microeconomic and Financial Situation of Nepal (of first six months of FY2017/18) made public by Nepal Rastra Bank (NRB) on Monday shows that BoP was in surplus of Rs 45 billion in the same period of last fiscal year.

Remittances - the main source of foreign exchange for the country - posted negative growth of 0.5 percent to Rs 340.54 billion in the first six months of the current fiscal year.
BoP has remained in the negative territory in recent months, while the current account, which measures the country's transactions with the rest of the world, also registered a deficit of Rs 75.51 billion in the review period in contrast to a marginal deficit of Rs 1.08 billion in the same period of the previous fiscal year. “

"BoP posted negative growth because remittances sent home by migrant workers was not enough to compensate the expenses that the country makes to import goods and services," NRB Deputy Governor Rajendra Pandit said. The slowdown in remittance also contributed to current account deficit, according to Pandit.

Nepal's exports grew by 15 percent to Rs 534 billion in the review period, while exports, which has a very low base, increased by 13.4 percent to Rs 41.13 billion.

Though capital transfer, including grants and loans as foreign assistance and Foreign Direct Investment, saw a growth in the review period, its low base did not compensate for the huge deficit in its financial transactions with other countries.

In the review period, Nepal received capital transfer amounting to Rs. 10.07 billion and Foreign Direct Investment (FDI) inflows of Rs. 14.33 billion. In the same period of FY 2016/17, capital transfer and FDI inflow were Rs 7.93 billion and Rs 7.39 billion, respectively.“
"Based on the imports of the first six months of the current fiscal year, foreign exchange holdings of the banking sector is sufficient to cover merchandise imports of 12.2 months, and merchandise and services imports of 10.6 months," the report states.

Another bleak financial indicator was the government's budget which posted a deficit, owing to low growth in revenue collection. In the first six months of 2017/18, the government was at a deficit of Rs 35.47 billion, compared to a surplus of Rs. 40.22 billion in the corresponding period of FY2016/17.

KATHMANDU, April 13: The external sector of the country seems to be worsening as both current account and balance of payment... Read More...

KATHMANDU, Jan 19: Both Balance of Payment (BoP) and Current Account positions of the country slipped into deficit in the... Read More...