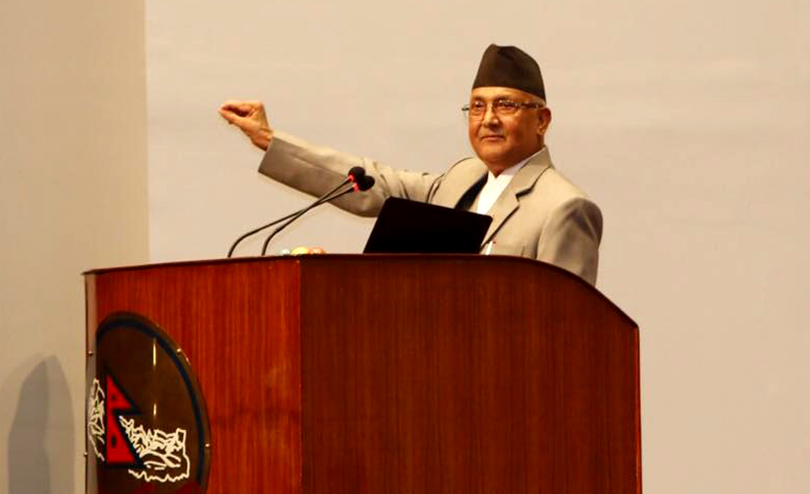 KP Oli had long established himself as a good leader but it was the Indian economic blockade that made him a statesman.

Although it may take some time yet for complete election results to come out, the eventual results of these elections could be of historic proportions. The biggest single-party majority in parliamentary election in Nepal was back in 1959 when Nepali Congress (NC) took almost 67 percent parliament seats (74 out of 109). The left alliance, although yet not a single unified party, could eclipse NC’s 67 percent of these elections, in both the houses. Likewise, the most votes a single party has received was in the 2008 Constituent Assembly elections, when the Maoists garnered a little over 38 percent of total votes. The left alliance is likely to exceed that too.

Many people don’t recognize that socialism existed long before Marx. Socialism has existed as long as capitalism, for presence of the latter is also the manifestation of the former. The French Revolution replaced feudalism with capitalism in the hope that it would usher in ‘Liberty, Equality and Fraternity’. Soon, though, critics started lamenting that capitalism was promoting wellbeing at individual level but not at the level of society. They believed Adam Smith’s notion that “if everybody pursued their self-interest, it will all work out for the best of everybody” emphasized ‘individual-ism’ and not ‘social-ism’. But it was the Marxist movement that spread communism throughout the world.

Socialist parties exist in most European countries, even as second or first parties in some. Bernie Sanders, who was openly called socialist, almost became the Democratic presidential candidate in the American election of 2016. With the left alliance on the cusp of governing our country, it is imperative to alleviate some of people’s fears. People confuse socialism with authoritarianism citing Stalin and Mao. However, it is naïve to like Stalin’s or Mao’s reigns as socialist, because they were both wrongs in their understanding that the state was mean to achieving socialism and not an end in itself.

Less than a decade ago, the Maoists ascended to power by promising to rearrange society, but like Stalin and Moa, the Maoists too failed to comprehend that capturing the state is futile, if it doesn’t become the ‘mean’ to achieve socialism. Nonetheless, juxtaposing the current political context with that of 2008 suggests a sort of second coming of the left.  The Maoists, who were the chief architect of Nepali politics after the 2008 CA elections, now have a  secondary role, with no one in any doubt as to who is leading the second coming of the left.

KP Oli had long established himself as a good leader, but it can be argued that the Indian economic blockade really elevated him as a true statesman. Every time he slammed the Indian government, it galvanized the nationalistic perception of Nepali people. Anti-Indian sentiments evoke nationalism among us, as was the case recently when the Dalai Lama raised questions about Buddha’s birthplace. Most Nepalis vented their anger at the spiritual leader, as well as on India. It was Oli’s defiance during the economic embargo that made him the quintessential figurehead that represented the unprecedented rise in anti-Indian sentiments in Nepal. He himself believed that the seed of recent electoral victory was sown during the embargo and now it is resulting in fruition.

Now that the elections have legitimized the constitution, one of Oli’s biggest challenges will no doubt be handling India. The past century of official ties between Nepal and India has been characterized by profound asymmetry in India’s favor. Nepal had always had all the trappings of a sovereign nation, but its economic system and thus its political system are directed from outside.

Such is our dependence on India that every year, Nepal imports almost US $1.5 billion worth of food from it. Almost 40 districts in Nepal are food deficit. What is going to happen when the Indo-Gangetic plains run dry? India not too long ago restricted exports of paddy. As per Nepal’s new constitution, the state shall maintain ‘international relations’ on the basis of sovereign equality. However, I believe that no country can be fully sovereign until it is economically self-reliant.

Prithvi Narayan Shah was astute in economic policies. He was a protectionist. He levied heavy taxes on imports and promoted exports. He had also observed that the Indian merchants would make life difficult for common people. The United States was founded as a protectionist country: with the founding fathers advocating taxing of imports to protect American manufacturers. While many economists argue that ‘protectionism’ cannot be sustained in a globalized world, a fine balance between export and import can be achieved.

The economy of Nepal is peculiar in that it has budget surplus each year along with trade deficit that is ever growing. India makes up 66 percent of total imports of nearly US $5 billion. By giving aid to Nepal, India has imposed many unequal treaties like one of 1950. India’s continued hegemony has resulted in neo-imperialism, that is, master-servant opposition.

The rewards will be huge. Ditching the peg would not only give Nepal Rastra Bank full authority to stabilize inflation and other aspects of the economy. It will also devalue the Nepali currency drastically, making exports from Nepal cheaper and imports more expensive, which in turn would help domestic productivity. China has been notorious in devaluing its currency time and again for the same purpose and it has been called the ‘manufacturing center of the world’.

Nepal’s geographic location and resources have been the envy of many; hence, it has been a victim of crude geopolitics. India, owing to its economic heft, has made Nepal subordinate. But why blame India alone? Nepal’s lifeless leaders have also played their part. Just as Nepal’s economic dependence has helped establish Indian hegemony, its economic independence can end it. The first step in this direction is having an independent currency.

The author is a freelance researcher

If he wants to be more successful this time, Prachanda should embark on quick grassroots initiatives that appeal to a... Read More...

Prachanda needs to set the ball rolling as quickly as possible and go about tackling the problems with speed and... Read More...

Aspiring drivers to get second chance

KATHMANDU, Nov 10: In view of easing the procedure to obtain driving license for the general public, the Department of Transport... Read More...