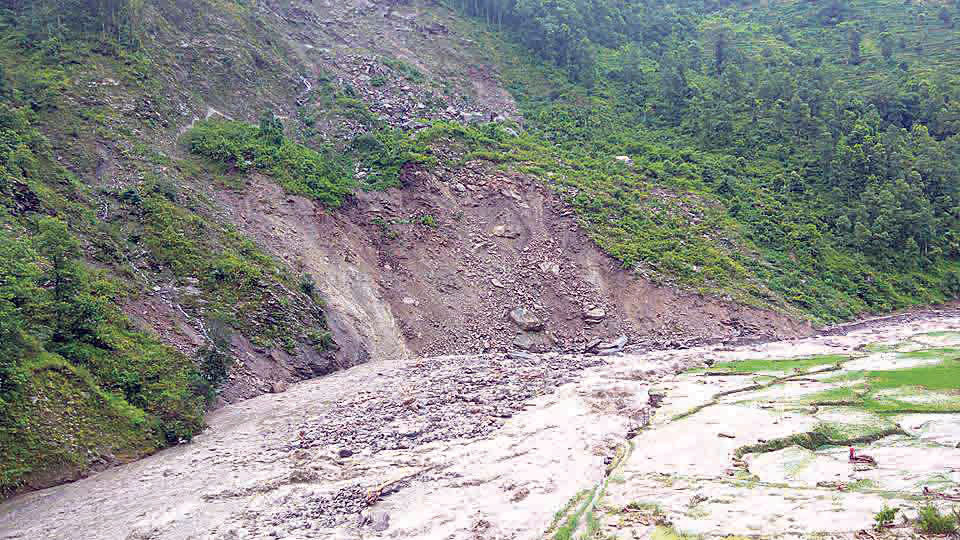 The scene of a landslide at Yubra in Rasuwa district.

RASUWA, August 5: More than 100 houses in Rasuwa are at risk from flooding and landslides due to incessant rainfall since Friday night.

Half a dozen houses of Uttargaya Rural Municipality-5, Betrabati have been affected after a crucial bridge connecting Nuwakot and Rasuwa was swept away by flood in Phalakhu River.

As the flood weakened the foundation beneath the pillar of the suspension bridge, the bridge toward the Nuwakot side broke down. The locals now have to take a longer route to reach the market place using a concrete bridge which lies a little further.

Similarly, a dozen houses of Rasuwa and Nuwakot are also at risk as Friday morning's flood has entered the settlements. According to Ganesh Shrestha, a local, flood did not just sweep away the suspension bridge but also destructed an embankment.

Likewise, more than 110 houses are at risk due to landslide in Yubra of Naikunda Rural Municipality-2. Heavy rainfall Friday night triggered the landslide below the village putting the settlements at risk. Flood and landslides have always been a great threat to the locals of this village since the last 16 years. There have been one after another massive landslides every year.

As informed by Ganesh Lama, a local, many people have been rendered homeless due to landslides in the past. "Our village has been surrounded by landslide debris," he said, adding, "We have not been able to have a good sleep since the flood swept away a large portion of land in our village."