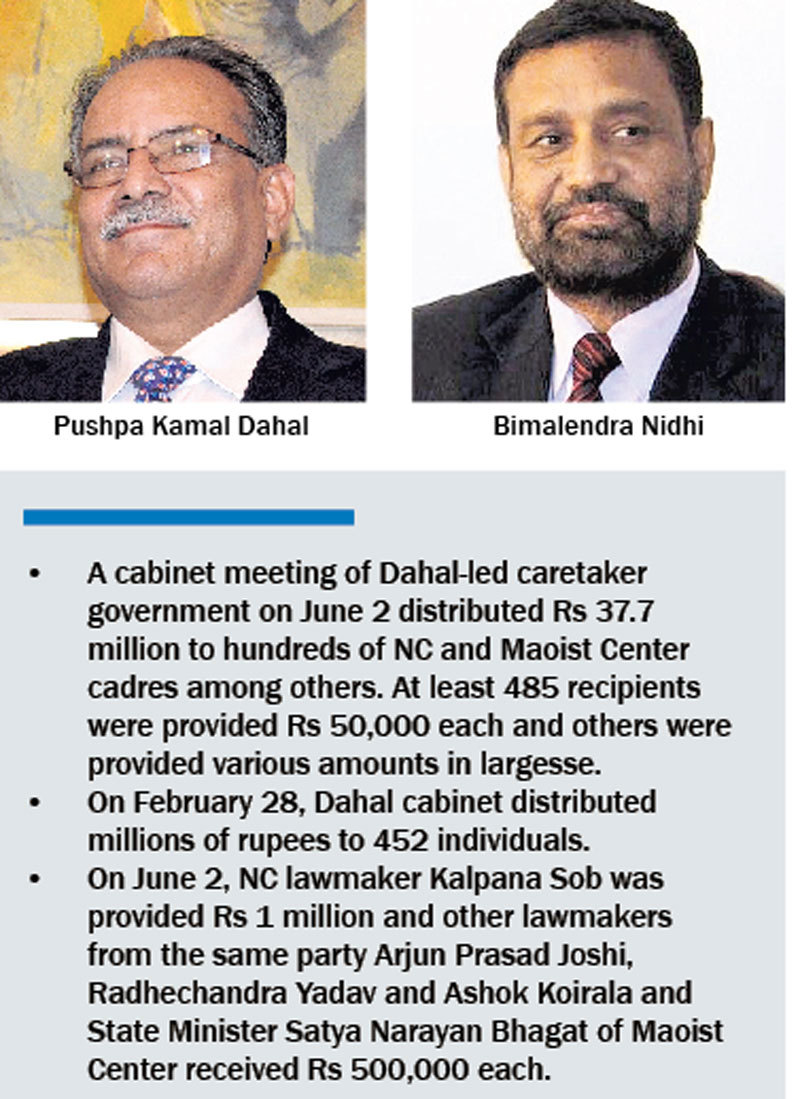 KATHMANDU, Aug 1: Prior to the second phase of the local elections in June, the caretaker government led by CPN (Maoist Center) Chairman Pushpa Kamal Dahal is found to have distributed over Rs 167 millions in a single day to the cadres of Maoist Center and Nepali Congress under the pretext of “financial assistance”.

Dahal is found to have distributed such a huge amount in collusion with the then deputy prime minister and home minister Bimalendra Nidhi after his resignation as prime minister apparently to influence the upcoming the second phase of local elections in their favor.

Dahal had tendered his resignation as prime minister on May 24 as per an informal understanding with the Nepali Congress to hand over power to the party’s president Sher Bahadur Deuba. But on June 2, Dahal-led caretaker government is found have distributed Rs 167.1 million as state largesse to 535 cadres of NC and the Maoist Center nine days after resignation.

The decision came ahead of the second phase of the local polls scheduled for June 28 in a clear breach of the election code of conduct. The recipients of the state largesse hail from various districts including Ilam, Jhapa, Morang, Sankhuwasabha, Pyuthan, Udayapur, Khotang, Sunsari, Dang, Banke, Bardiya, Kailali, Kanchanpur, Dadeldhura, Rupandehi, Baitadi and Darchula that were readying for the second phase of the local polls.

Not surprisingly, former ministers, lawmakers and party cadres are among those receiving the largesse from Dahal cabinet. According to the list of recipient received by Republica, those lucky ones include the then Maoist state minister for energy Satya Narayan Bhagat (Rs 500,000), former Maoist lawmaker from Doti, Kalpana Sob (Rs 1 million), NC lawmaker Arjun Prasad Joshi (Rs 500,000), lawmaker from Bara Radhe Chandra Yadav (Rs 500,000) and another lawmaker from Chitwan Sabitri Chaudhari (Rs 500,000).

Nevertheless, successive governments have been distributing the money from state coffers in the name of medical treatment and financial assistance, defying both the ruling of apex court and directive from the parliamentary panel. Sources at the Prime Minister’s Office said there is a long-standing tradition of distributing funds to near and dear ones through collusion between the prime minister and home minister.

Prior to this, Dahal-led cabinet had decided to distribute cash to state ministers and parliamentarians, defying the election code of conduct that came into force after the EC announced the date for local level polls. On February 28, then Home Minister Nidhi had taken a proposal to the cabinet to distribute financial assistance to 452 individuals.
Although the original list of the largesse recipients is prepared by the home minister, sources said the prime minister also adds names to the list before getting it endorsed from the cabinet.

Meanwhile, Home Ministry spokesman Dipak Kafle said that the financial assistance can be provided to the needy anytime through cabinet decision. “This could be provided anytime and even during election time. It is the primary responsibility of the home ministry to protect the life and property of the citizens,” he further said.

KATHMANDU, Nov 22: Ahead of two rounds of crucial elections, the Ministry of Home Affairs (MoHA) has transferred the chief district... Read More...

Govt reshuffles top-level of bureaucracy ahead of polls

KATHMANDU, Oct 23: The cabinet on Monday appointed Yubraj Bhusal, a former secretary of the government of Nepal, as the new... Read More...