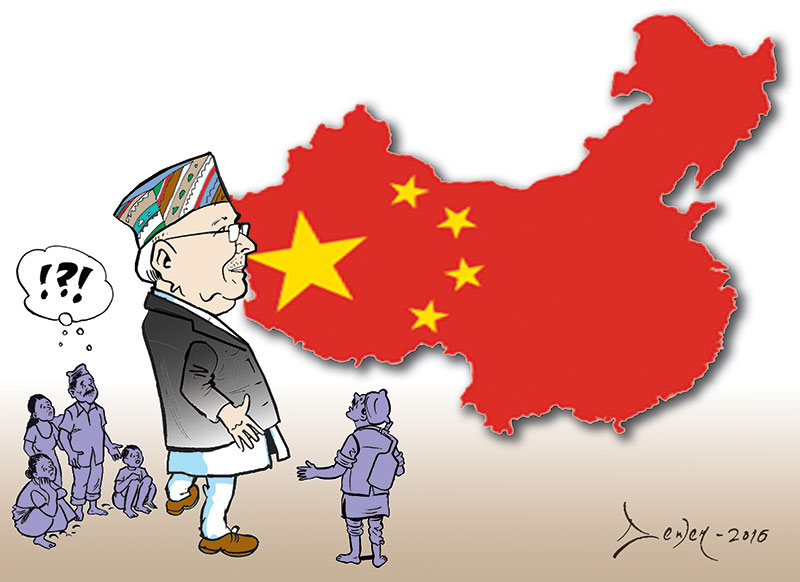 The transit and transport agreement that was signed by Nepal and China back in March this year was historic in the sense that, offering a renewed prospect of enhancing connectivity with the northern neighbor, it has opened up a new vista in the diversification of Nepali trade. Some people have seen this agreement as no more than a reaction to the agony imposed by the Indian border blockade for almost five months. This may be one of the reasons that inspired the agreement. But the need to diversify transit and trade routes has been felt for a long time so that the country can reduce its over-dependence on a single country for nearly all its external trade.

The economic and political linkages between Nepal and China date back to the seventh century, the era of ancient Nepal when Bhrikuti, the Nepali princess, was married to the Tibetan king Srong-chan-Gampo. Jokhang monastery in Lhasa, constructed at the initiation of the princess, still stands as the living testimony of this relationship. Bilateral trade and movement of people across the Himalaya that straddles the two countries for economic, social and religious purposes has been a part of Nepali life since that time. However, the modern-day relationship between Nepal and China is not in keeping with the demands of the globalization and development of modern transport and communication tools.

Foreign direct investment, trade and tourism are considered universally accepted parameters in measuring bilateral economic relations between any two countries. If these are indeed the markers of bilateral relations, Nepal-China ties leave a lot to be desired. Take investment. Total Chinese investment in Nepal was around Rs 47 billion, spread over 878 projects, by the end of 2014-15. Thus the average size of project investment is relatively small, and mostly scattered among hotels, restaurants, and health and fitness services. Only a few big hydropower projects that are currently under construction in Nepal have Chinese investment. China’s total overseas investment was US $613 billion by the end of 2013; only a negligible fraction (US $0.4 billion) of this is came to by Nepal.

Bilateral trade is as disappointing. In 2014-15, Nepal exported goods worth Rs 2 billion to China even while it imported goods worth Rs 100 billion from the same country. This lopsided trade has contributed to a ballooning balance of payment. And it’s getting worse. According to the Trade and Export Promotion Center, in the 11 months of this fiscal, exports to China slowed down to Rs 1.55 billion while importers further increased to Rs 103 billion.

If we look at tourism, yes, the flow of Chinese tourists coming to Nepal has increased over last few years, reaching 123,000 in 2014. But this is a minuscule figure if we consider that in the same year 107 million Chinese visited other countries.

The imperatives
Lack of transport connectivity is the major impediment towards greater economic and commercial linkages with China. The six border posts across the Himalayan passes are designated as overland trade routes, but not one of these has infrastructures suitable for international trade. The development of railway links up to Lhasa in 2006 and further on to Shigatse in 2014 has opened opportunities for extending the railway up to the Nepali border and then further into the country.

The joint Nepal-China press statement issued at the end of Prime Minister KP Sharma Oli’s China visit has categorically instructed relevant authorities on both the sides to exchange proposals on constructing cross-border railways and expanding railway network in Nepal and to carry out preparatory works for this as soon as possible.

We should not waste any more time for the transit agreement between the two countries is a milestone in the trade history of Nepal. The agreement provides an opportunity to link Nepal with sea ports and land ports in China. This will ultimately help Nepal establish linkages with the Pacific Rim countries as well as with the Central Asian countries, via Chinese territories. True, all this may take time but at least now have an opening. Now it is up to the willingness of the two governments to take the agreements forward.

New approach
Transit transport through China would be difficult with conventional method of clearing goods at sea port and then making the final journey to land port or border posts overland, mainly due to the long distance between the ports in China and transit border points in Nepal. We thus need new ideas if we are to implement the transit agreement. For instance there can be a bilateral agreement for clearances of goods at Chinese sea ports with minimum use of documents, which can perhaps be achieved through the involvement of Nepali warehousing companies.

Likewise, the movement of containerized cargo by train should not be subjected to many procedural hassles as the sole custodian of such goods in transit will be the railway authorities of China. The delivery points adjacent to Nepal border could then be developed as dry ports or distribution parks, where all customs formalities are competed for onward movement of the goods to Nepal or other sea ports in China. The transporter, as the custodians, should also be liable to pay insurance duties, if they are at all warranted.

It is important that the two governments develop an effective institutional mechanism to oversee and review transit provisions on a periodic basis to make them timely and in keeping with the changing needs of both the countries. Transit transport also encourages the movement bilateral trade by making it cost-effective and hassle-free. This in turn encourages cross-border investments, and two-way flow of people.

Thus I would like to urge both Nepal and China to redouble their efforts to adequately implement the trade and transport treaty so as to facilitate a closer economic relationship. This will also offer a wonderful opportunity for Nepal to establish itself as a land-bridge between its two neighbors, positioning the landlocked country to benefit from their prosperity.