Over 5,000 women elected in phase one local polls 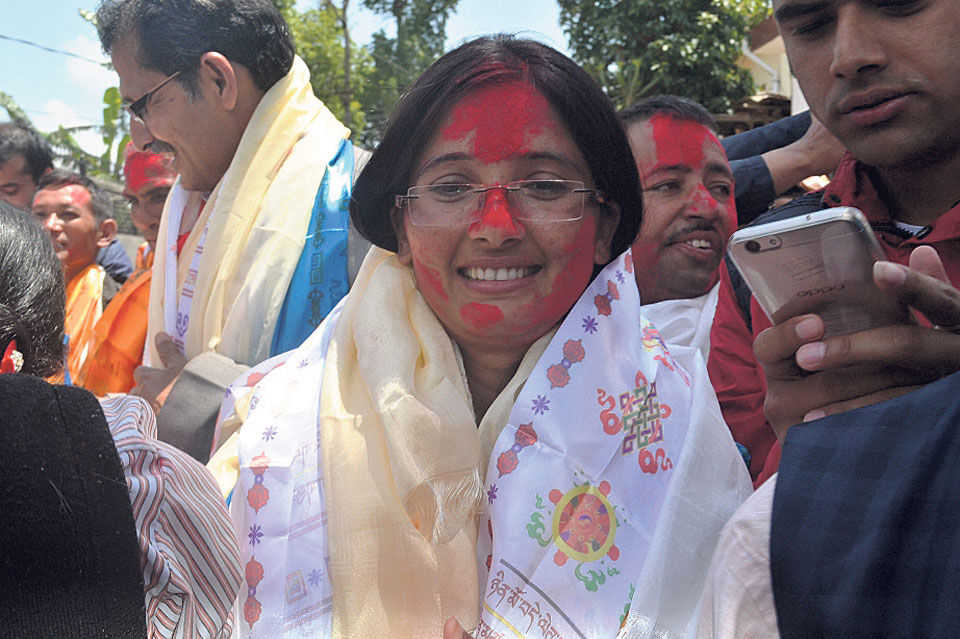 Januka Parajuli, the deputy mayor of Chautara-Sangechowkgadhi Municipality of Sindhupalchowk.

KATHMANDU, June 21: Over 5,000 women have been elected to the newly created local units in the first round of local elections held in provinces 3, 4 and 6.

According to details provided by the Election Commission (EC), 5,445 out  of the total 13,038  elected to various positions at the local units are women. The election commission has already published the results of all 283 local units that went to the polls except Bharatpur Metropolitan City.

Most of the women  candidates  have bagged posts at the municipalities and rural municipalities. The election law has a provision requiring the fielding of opposite genders for the chief and deputy chief of any given local unit. Apart from this, the political parties need to field at least two women members including a Dalit woman in each ward.

UML female leaders have bagged three mayoral posts, the most by women candidates from any party. And out of 53 deputy chiefs of municipalities bagged by the UML, 48 are women.

Altogether 53 women deputy chiefs of rural municipalities were elected from Nepali Congress, 78 from UML, 31 from the Maoists, 2 from RPP and 1 from Rastriya Janamorcha.

Altogether only 2,596 women and only 2,452 Dalit women were elected from the respective reserved quotas. Besides the reserved seats, 106 women  managed to secure victory through open competition.

Women representation is very low except in the reserved seats.  Only eight percent of the total number of candidates fielded for  chiefs of local units was female.

KATHMANDU, Oct 24: Although it is mandatory to ensure at least 33 percent representation of women both in parliament  and in... Read More...

KATHMANDU, Aug 31: The Election Commission and various security agencies have sought a total of Rs 2 billion for the upcoming... Read More...

Coronavirus insurance claims worth Rs 11.5 billion yet to be settled
5 hours ago
Residents can install EVs charging units for their personal use: NEA
22 minutes ago