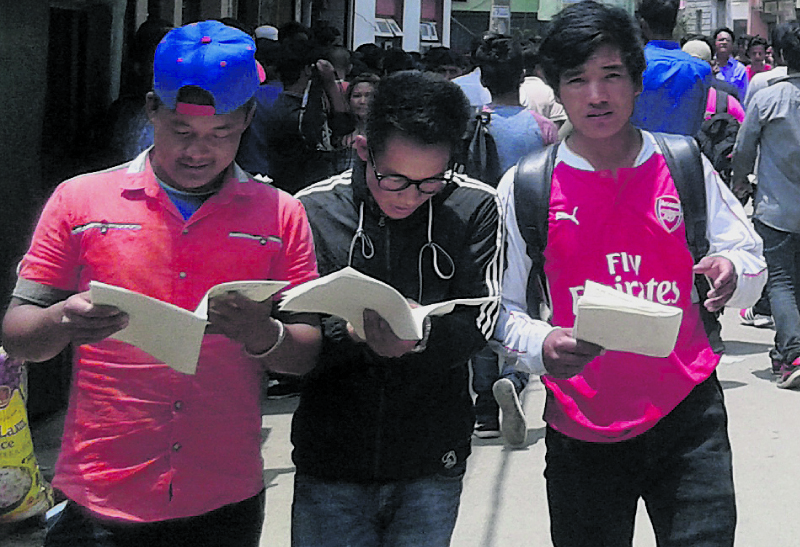 KATHMANDU, June 11: Around 69,000 Nepali youths have appeared in the Korean Language test this year in pursuit to secure jobs through widely acclaimed Employment Permit System (EPS) of the South Korean government.

South Korea, which conducts language test in 15 different labour receiving countries annually, plans to hire up to 10,200 Nepalis jobseekers in 2018.

Department of Foreign Employment (DoFE) said that around 34,000 jobseekers took part in the Korean language test on Sunday, the second day of the two-day-long examination. Some 35,000 jobseekers had sat for the exam on Saturday.

“Some problems were reported in one examination center in Khulamtar but there was no problem in other centers. We believe that around eight to ten percent of 75,580 applicants may have skipped the exam,” Sobhakar Bhandari, section officer at the EPS section of DoFE told Republica

The examination was conducted at 26 different centers of Kathmandu and Lalitpur district in two shifts.

It is a must for all Korean job aspirants to pass the language test to be eligible for work in South Korea. However, passing the language test alone might not be enough to actually land a job as workers are supposed to meet all criteria set by the Human Resource Department of the Korean government.

South Korea is considered one of the most lucrative work destinations for Nepali workers due to fair and transparent recruitment process, low cost, relatively better wage and other facilities. Nepali workers earn a minimum of Rs 150,000 in South Korea irrespective of the nature of work.

Tens of thousands of Nepali youths, both men and women, apply for the EPS Korean language examination every year. DoFE records show that a total of 75,607 job aspirants have applied for the language test this year, a significant increase from last year's 61,637.

Notwithstanding a growing craze for work opportunities in South Korea among Nepali youths, the demand for workers is very low.  South Korea has so far hired 34,862 Nepalis since fiscal year 2007/2008, according to DoFE.  The north Asian country started hiring Nepali youths under EPS system in July, 2007.

Over 35,000 take Korean language test on day one

KATHMANDU, June 18: Police have arrested 32 persons who appeared in the Test Proficiency in Korean (TOPIK) language exam in... Read More...