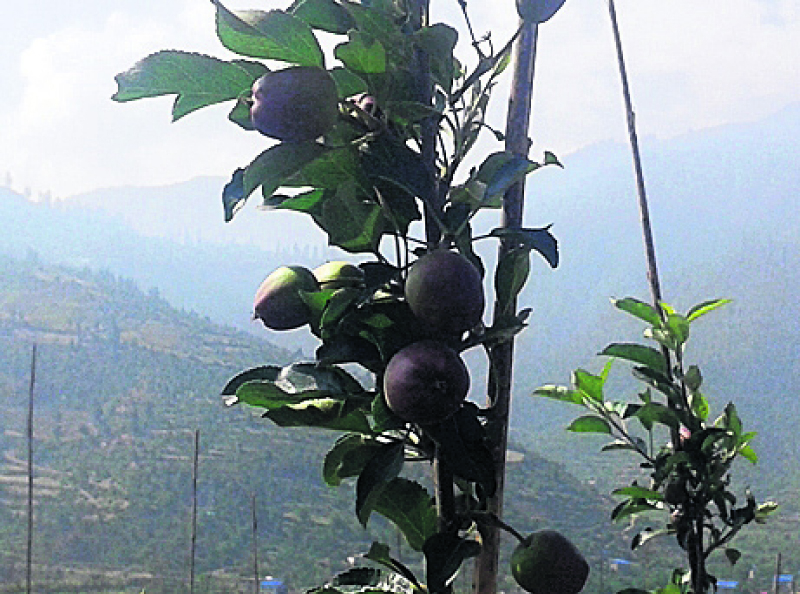 Shashil Devkota, a director of Hamro Agriculture Cooperatives, said earlier he had doubts that the plants would bear fruits within three months. “Now I am confident that our investment won't go in vain,” he said, adding: “Now, our focus is on finding market for the apples grown in Sera Jyulo.”

The cooperative has also decided to conduct awareness among local villagers about the benefits of cultivating of Fuji apple.

The apples grown in Sera Jyulo will be ready to send to the markets in two months.
Local farmers say the apple plant will yield fruits for 27 years. Each plant will produce 42 kg of apples after four years.

The saplings first arrived at the Kolkata port of India and then transported to Nepal via Birgunj Customs Office.

Earlier, Manang Agro had transplanted saplings of Fuji apples on a trail in Manang district. This apple variety was introduced to Jumla in the initiation of youths of Jumla. This apple variety has also been cultivated in Tamti of Tatopani rural municipality.
Jumla Agro Farm and Hamro Agriculture Cooperatives have taken land of Chandan Nath Bhairab Nath Guthi on a 10-year lease. “Through apple farming, we are trying to disseminate message to local youths that we can do something in our country itself,” said Devkota.

The farm is also planning to produce and distribute saplings of Fuji apples to local farmers.

The plant bears fruits two times a year and the fruit is sweeter than the local variety.

JUMLA, August 20: Jumla apples are facing the problem of branding as the farmers in the district have been sending... Read More...