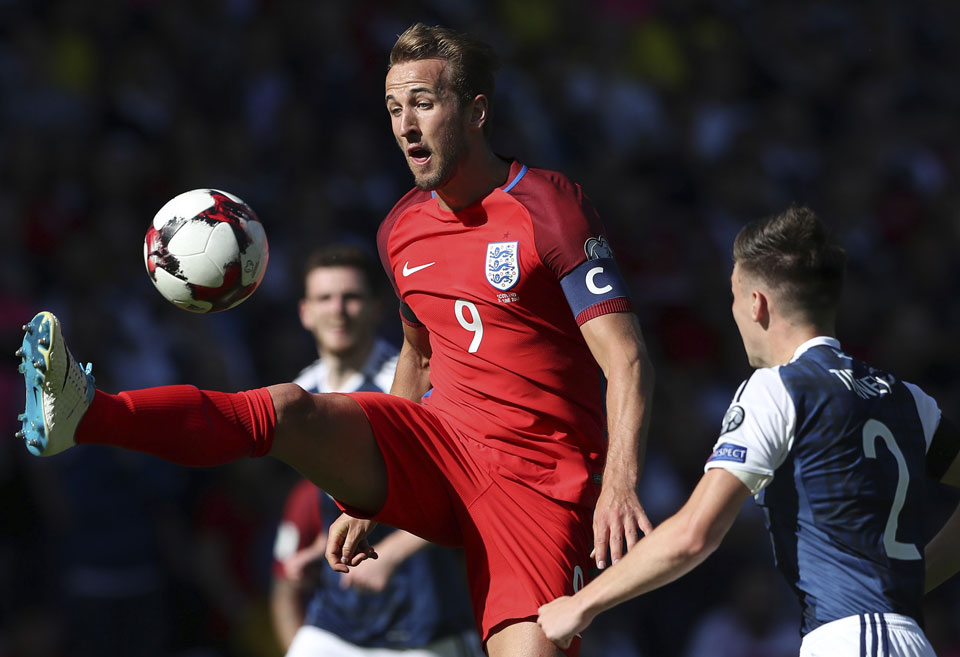 GLASGOW: While Harry Kane didn't contribute to the glut of hat tricks in European qualifying for the World Cup, the England striker grabbed a crucial equalizer in a chaotic finale against Scotland on Saturday.

A dramatic final six minutes in Group F at Hampden Park saw Scotland come from 1-0 down to take the lead through two Leigh Griffiths free kicks. Kane, captain of England for the first time, volleyed home deep into stoppage time to make it 2-2.

Things were simpler for Germany and Poland, who were aided by hat tricks as the pair continued to dominate their groups.

Despite fielding a weakened team against minnow San Marino, Germany stayed perfect in Group C with a 7-0 win. Sandro Wagner scored a hat trick on just his second appearance for Joachim Loew's side.

Poland stayed unbeaten as Robert Lewandowski's hat trick took him level with Cristiano Ronaldo at the top of the scoring charts. Lewandowski scored two penalties during a 3-1 win over Romania.

But that wasn't Group E's only treble. Stevan Jovetic scored Montenegro's first ever hat trick in a 4-1 victory over Armenia.

Kane, who has led the Premier League's scoring charts for the last two seasons, had mixed emotions at fulltime.

To get the goal was special. I did not know whether the keeper was going to come, so when I saw him stay on his line ... what a ball it was, and it was just a good side-foot into the net."

It was only ever a question of how many goals Germany would score against San Marino at Grundig Stadium in Nuremberg.

Julian Draxler, one of the few regulars in a weakened Germany squad, opened the scoring before Wagner claimed his first international goal five minutes later, and he didn't have to wait long before claiming his second, after fans indulged in Mexican waves.

Midfielder Amin Younes claimed his first goal for Germany before the break, and there were more cheers after it when Shkodran Mustafi scored two minutes into the second half.

Fans needed a bit of patience before the sixth arrived courtesy of Julian Brandt, whose first international goal came in the 72nd, and Wagner completed the rout with five minutes remaining.

Norway and the Czech Republic played out a 1-1 draw in Oslo as Theodor Gebre Selassie scored from close range 10 minutes before the break, but Norway's Alexander Soderlund equalized from the penalty spot.

Northern Ireland took advantage of the result as Stuart Dallas scored an injury-time goal to consolidate second place in the group, five points behind Germany, but four clear of the third-placed Czech Republic.

Poland stayed six points clear as Lewandowski got on the scoresheet for an 11th consecutive qualifying match. He emphatically headed home in the 57th before sealing his hat trick with another penalty five minutes later.

Romania scored the goal of the night in the 77th through Bogdan Stancu's stunning strike but its qualifying hopes look bleak after losing ground to second and third-placed Montenegro and Denmark.

Montenegro started fast as Fatos Beciraj gave it the lead after just two minutes, before Jovetic took matters into his own hands. The captain doubled his side's lead with a low strike in the 28th, and scored Montenegro's 100th international goal to make it 3-0.

He saved the best until last, converting with a stunning scissor kick in the 82nd. Ruslan Koryan bagged a late consolation for Armenia.

Denmark kept pace with Montengro in the race for second place as it beat 10-man Kazakhstan 3-1 in Almaty.

Nicolai Jorgensen opened the scoring in the 27th and Christian Eriksen added penalty before Islambek Kuat pulled one back for the home side. But substitute Kasper Dolberg sealed the win in the 81st.

England's position at the top of Group F was weakened as Slovakia and Slovenia both won, but it left Hampden Park relieved to have kept its eight-year unbeaten run in tournament qualifying matches intact.

Alex Oxlade-Chamberlain came off the bench to give England the lead before Griffiths's free kicks looked to have snatched victory for Scotland.

But Kane popped up deep into stoppage time to preserve a two point cushion for England in the standings.

Its nearest challenger is Slovakia, which secured a crucial 2-1 victory in Lithuania.

Marek Hamsik set up Vladimir Weiss for the opener and added a stunning free kick of his own after the break.

Slovenia is just one point further back in third place after a comfortable 2-0 win against Malta.

Josip Ilicic gave his side the lead with a fine curling effort from an acute angle before setting up Milivoje Novakovic to seal the victory.

LONDON, Nov 8: Jack Wilshere and Harry Kane have been recalled to the England squad for Friday's World Cup qualifier against... Read More...

EXPLAINER: What’s known about ‘stealth’ version of omicron?
5 hours ago

Rapist sent to 18 years in prison
4 hours ago

National Assembly Election: Voting starts at 9 AM
5 hours ago