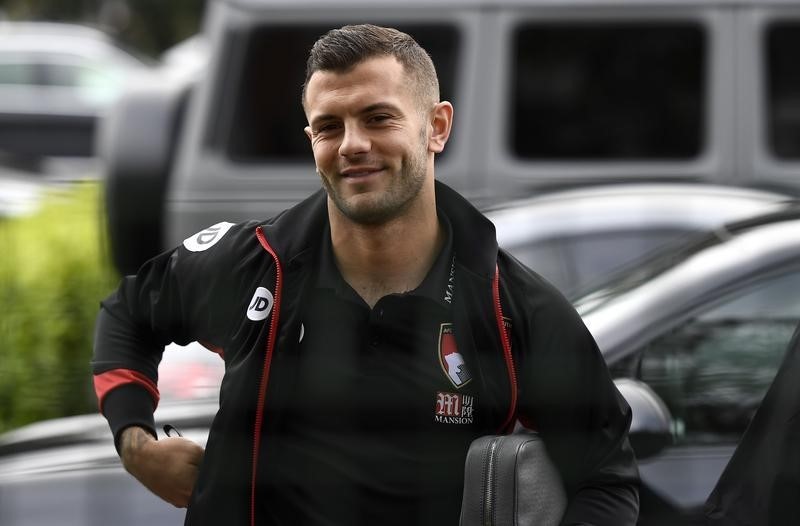 LONDON, Nov 8: Jack Wilshere and Harry Kane have been recalled to the England squad for Friday's World Cup qualifier against Scotland and a friendly against Spain, the FA announced on Sunday.

Arsenal midfielder Wilshere, 24, had been left out of the two previous squads but his form has improved during a loan spell at Bournemouth where he has been enjoying more regular playing time.

Tottenham striker Kane has recovered from an ankle injury that kept him out of last month's 2018 qualifiers against Slovenia and Malta.

"Jack Wilshere is a player that we feel has a lot of class and is now starting to get more 90 minutes under his belt," England caretaker manager Gareth Southgate told the Football Association website (www.thefa.com). "It's good to bring him back into the squad."

Manchester United defenders Chris Smalling and Luke Shaw are not in the 25-man squad after both being declared unfit for United's 3-1 win at Swansea on Sunday.

Midfielder Dele Alli also misses out after twisting his knee during training on Saturday. His Spurs team mate Kyle Walker faces a fitness test with England's medical staff after going off injured in the second half of Sunday's 1-1 draw against Arsenal.

Burnley's Michael Keane retains his place in the squad after getting his first call-up as injury cover for last month's games. Fullback Nathaniel Clyne and midfielders Adam Lallana and Raheem Sterling also return after recovering from injuries.

England's Group F game against Scotland at Wembley Stadium has been beset by a row over whether their players can wear armbands featuring poppies to mark Armistice Day.

The two countries' football associations have said they will defy a ban on wearing the armbands which was imposed by FIFA and which prompted British Prime Minister Theresa May to say the world governing body's stance was "utterly outrageous".

England, who lead Group F, meet Spain in a friendly on Nov. 15, also at Wembley.