19 airports out of operation 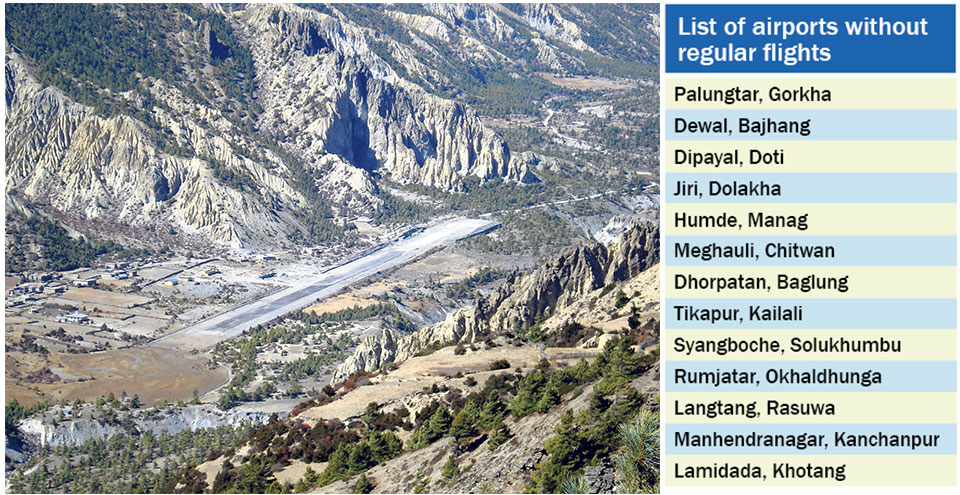 KATHMANDU, March 17: Among the total 49 airports in the country, 19 do not operate regular flight services. With airports stagnant, airfields have transformed into grass fields.

However, of the 19 airports, some do provide chartered flights.

According to Civil Aviation Authority of Nepal (CAAN), of the total 49 airports, international flights are operated only from Tribhuvan International Airport in Kathmandu. The rest can operate only domestic flights. Among the 30 that allow regular flights, not all are operating in full capacity.

In many of the airports, even test flights are yet to be conducted. Airports where test flights were carried out have become dysfunctional after a short operation period. For instance, the airport in Panlungtar of Gorkha, established 40 years ago, remains shut.

Airports in Baitadi, Bajhang, Darchula, Doti, and Mahendranagar also remain shut. Dewal Airport in Bajhang district headquarters has closed down for 11 years. Dipayal airport in Doti has been in disorder for 15 years.

According to Paudel, the failure to operate the 19 airports is not CAAN’s fault. “We wish to bring all airports into operation,” he said, adding, “Because of the lack of passengers, flights haven’t been conducted.”

Private companies are profit-oriented. With limited number of passengers, many airline companies do not carry flights fearing losses. However, Nepal Airline Corporation does run some flights in less popular airports. However, the corporation states that even while conducting only one or two flights per week, passengers are scarce.

In later years, Baglung Balewa airport came into operation. After the local unit said that they would bear all losses if the number of passengers was not adequate for the airlines to break even, regular flights started in the airport. However, regular flights stooped soon enough.

According to NAC, air travel was popular due to lack of road network in the past. However, now that there is road access in almost all districts, travelers have begun to prefer cheaper land transport over air travel.

NAC says that it is attempting to bring airports into operation as far as possible.

KATHMANDU, August 17: European Union has welcomed the decision to split CAAN into a regulatory body and service provider. ... Read More...

KATHMANDU, Mar 12: Senior captain of Nepal Airlines Corporation, Subarna Awale, who has been released on bail in a case related... Read More...