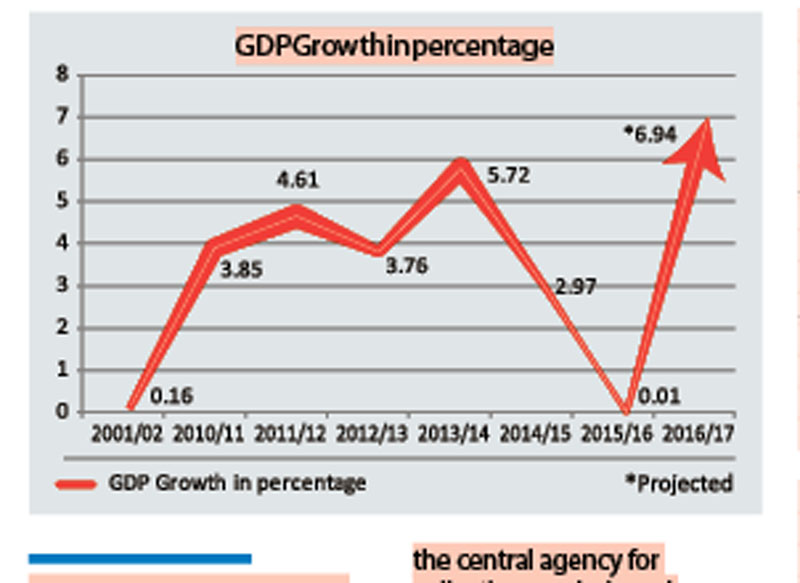 KATHMANDU, April 26: The Central Bureau of Statistics (CBS) has projected the national economy to grow by 6.94 percent for the current fiscal year 2016/17, up from the 6 percent target set by the government.

Organizing a press briefing in the capital on Tuesday, the CBS said that the GDP growth  last fiscal year  was 0.01 percent, down from an earlier projection of 0.77 percent.

The CBS has said that it is optimistic over the macroeconomic indicators  in the current fiscal year.

“The economy has moved toward a positive direction in the current fiscal year thanks to the rise in  agro production due to favorable weather, the pace that reconstruction has taken on and the ridding of the energy crisis, ” reads the CBS statement.

While the World Bank projected a growth of 5 percent, the ADB an estimated 5.2 to 6.2 percent and the International Monetary Fund 5.5 percent recently, the central agency for collection, analysis and dissemination of statistics under the National Planning Commission Secretariat (NPCS) has estimated  GDP  growth by the highest rate since 1993/94.

“The growth has turned out so high mainly due to the low [starting] base of the GDP  last fiscal year,” said Rudra Suwal, a deputy director-general at  CBS. Had it not  been for the base effect, officials said, growth would have averaged 3.7 percent in the current fiscal year.

According to the CBS, the primary sector, which includes industries like agro, mining and fisheries, is estimated to grow by 5.32 percent, while the secondary sector (including electricity, water and construction) is predicted to see a growth of 10.97 percent. The tertiary sector (wholesale and retail trade, financial intermediaries among others) is estimated to expand by 6.9 percent.

The CBS figures show that the share of agriculture in the total economy has gone down to 28.89 percent in 2016/17 from 30 percent  last fiscal year.