Doctor has challenged all govts since 2012

KATHMANDU, July 18: Dr Govinda KC, senior orthopedic surgeon and professor at the Institute of Medicine (IOM), has been on fast-unto-death for 179 days in total since 2012, as of Tuesday. He has been demanding reforms in the medical sector, under different governments.

Dr KC, who first launched a hunger strike in July 2012 for reform in the medical sector, started his 15th hunger strike from June 30, in Jumla.

The Ordinance has also provisioned not allowing a university to grant affiliation to more than five private medical colleges, as  recommended by a probe panel headed by Prof Kedar Bhakta Mathema, a former vice chancellor of Tribhuvan University.

Shanta Bahadur Shrestha, a former secretary at the Ministry of Education and the Ministry of Health, said that access to quality medical education and health services is a fundamental right. “Dr KC is perfectly right to protest against commercialization of health and education,” he said. “On the other hand, the government’s policy of economic liberalization has been a boon for other sectors,” he added.

Dr KC has become a living institution in the advocacy of the rights of ordinary people, said Shrestha. “Most of his demands were addressed one by one but some of them are yet to be met because of pressure from big business and political interests. The medical colleges and hospitals were established by private sector actors close to the centers of political power,” he said.

Shrestha further said that competent but economically disadvantaged students remain deprived of medical education and only the well-to-do have access to it within the country. “This is unfortunate. The Mathema report was perfectly right in addressing the demands of ordinary people but it failed to address the issue of students going abroad to study medicine,” he said. “It also did not differentiate in terms of  standards between low quality private medical colleges such as Janaki Medical College and the better ones like BP Koirala Institute of Health Sciences, Dharan.”

Shrestha lamented the lack of proper laws and policies regarding the health sector. “The government  allows the private sector to open private medical colleges but has not been able to close them if they do not meet the standards,” he said.

“Therefore, Dr KC raised the issue of restricting  private investment in the health sector,” he added. Both Dr KC and the government have taken unnecessary stands on restricting private colleges and issuing affiliation to them, he concluded.

Dr Jivan Kshetry, a member of the Solidarity for GKC Alliance, said that the government did not show sincere concern toward  the genuine problems of the people. “It claims to be a government of the poor     but works only for the rich and the mafia,” he said. “Dr KC is not biased against any government. He has protested against all the governments of the day to secure the right of ordinary people to quality health services,” he added. “The government should abide by the laws and rules and its own pledges to the people.” 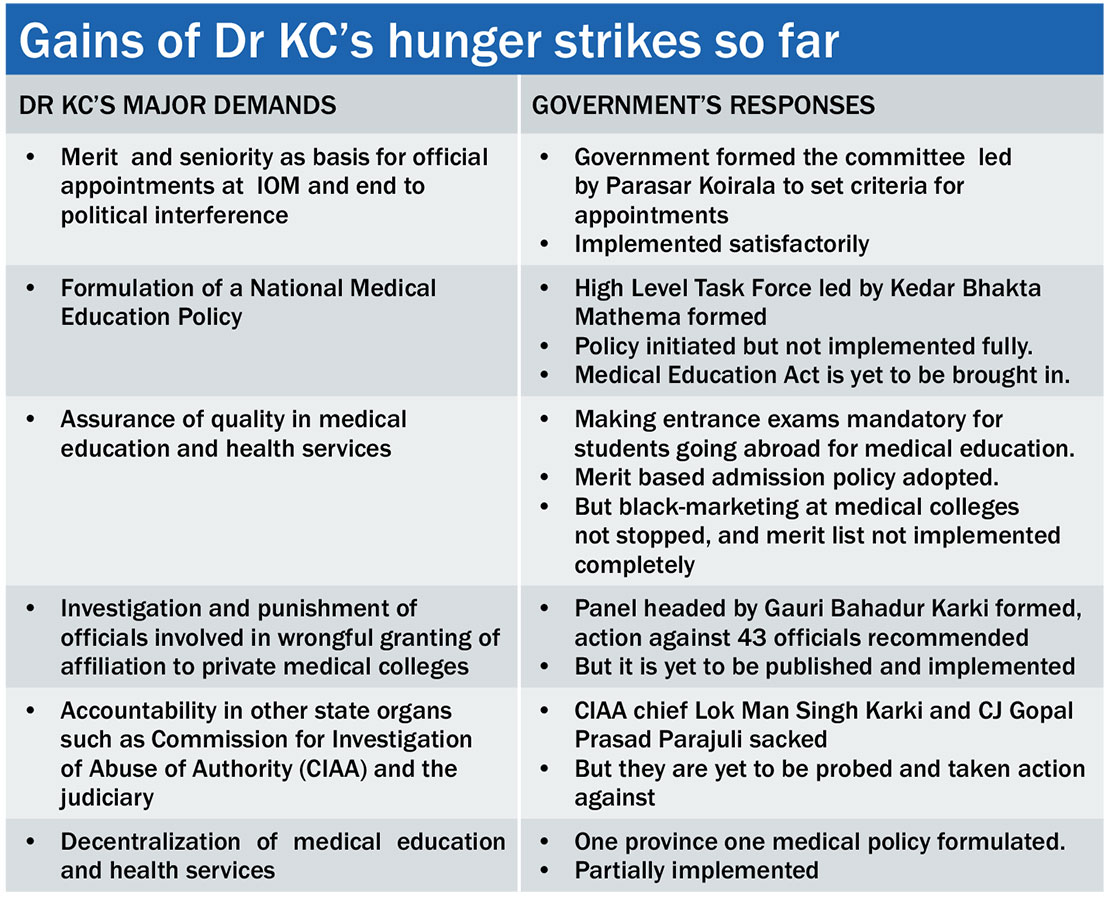 Govt’s talks team yet to leave Kathmandu for Jumla
JUMLA, July 18: While the government recently formed a talks team to hold dialogue with Dr Govinda KC in Jumla, the team has yet to reach Jumla. Dr KC has been on a fast-unto-death since the past 18 days demanding crucial reforms in the medical education sector.

Dr Abhishek Raj Singh, one of the supporters of Dr KC’s cause, said the delay shows the government’s lack of commitment to resolve the issue.

“The team postponed its planned visit to Jumla as the government is more interested in airlifting Dr KC to Kathmandu than addressing his demands through talks,” said Singh.

Meanwhile Dr KC has said he does not intend to break his hunger strike until the government fulfills his seven-point demand. The doctor’s health has been reported to be critical. He has developed severe respiratory problems and has spell of unconsciousness, according to the doctors attending him.