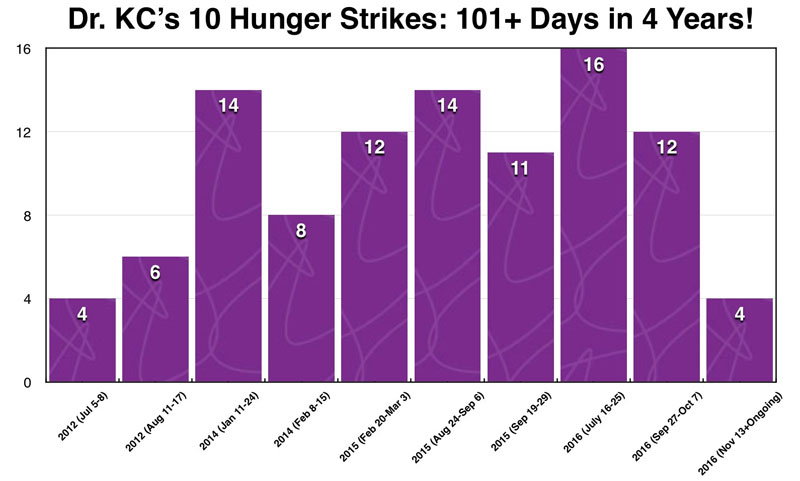 But his fight for change remains unfinished. He began his 10th fast-unto-death Sunday, demanding the removal of TU Vice-chancellor Tirtha Raj Khnaniya and impeachment of suspended CIAA chief Lokman Singh Karki, among other things.

Dr KC's first hunger strike was in July 2012,  when he was demanding the appointment of the dean of the Institute of Medicine on seniority basis. The hunger strike ended after five days with the government decision to appoint Dr. Kumud Kumar Kafle as dean.

Unfortunately, KC had to stage a second hunger strike after a gap of just two months as TU, which initially dillydallied over the dean appointment  on seniority basis, later appointed Dharma Kant Banskota. Banskota had ranked 32th in seniority.

Following KC's hunger strike, the government backtracked on the appointment of Banskota and settled for Dr. Prakash Sayami instead.

However, the government breached the agreement on seniority and KC had to stage a fourth hunger strike.  Following that, the government appointed Rakesh Shreevastav as dean and agreed to seek clarifications from TU officials over the affiliations granted to medical colleges. It also agreed to provide autonomy to IoM.

But contrary to agreement, Kathmandu University granted affiliation to two medical colleges. Further, CIAA chief Lokman Singh Karki was  found involved in pressuring the Health Ministry and IoM to increase the number of seats for students at medical colleges operated by his relatives. This led to KC's fifth hunger strike in August 2015. The government then agreed to form a Medical Service Commission and to not grant affiliation to medical colleges unless parliament endorsed the bill relating to medical sciences.

The government, however, delayed implementation of  the report submitted by the Mathema Commission. Dr. KC's sixth hunger strike was for implementation of the  Mathema Commission and to press for limiting the fees and the number of seats at medical colleges.  The hunger strike ended with an agreement to fix the maximum fee at Rs 3.5 million for the MBBS, as suggested by the commission.

Dr. KC, who began his seventh hunger strike, postponed it on the seventh day without reaching any agreement, in view of the humanitarian crisis that emerged following the unofficial blockade imposed by the Indians.

In July, KC staged his eighth hunger strike demanding impeachment of CIAA chief Lokman Singh Karki on the charge of abusing his authority for the benefit of medical colleges operated by his relatives.  After the hunger strike, the government and KC agreed to discuss Karki's impeachment and about purchasing the controversial Manmohan Medical College.

Later, Karki was forced to stage a ninth hunger strike in October, demanding endorsement of the  proposed medical education bill. But he interrupted the strike on the 12th day following unsuccessful negotiations with the government.

From Sunday onwards, he has began the 10th hunger strike, pressing the previous demands for the appointment of the IoM dean on seniority basis and expediting of the impeachment process against the CIAA chief. Despite the repeated protests, the government on Sunday appointed controversial KP Singh as IoM dean, sidelining seniormost candidate Dr. JP Agrawal.

KC is staging the 10th hunger strike at a time when one of his supporters, Gagan Thapa, is in charge of the Ministry of Health.

Asked about his failure to avert KC's hunger strike, Thapa said he alone was not in a position to address the demands. “Dr KC has signed agreements with the government.

But different stakeholders such as Parliament, the Ministry of Health, the Ministry of Education and Tribhuvan University are responsible for addressing his demands,"| he said.
Minister Thapa blamed TU for KC's protest.  “The Ministry has already sorted out the row over seats at medical colleges," he said adding. "TU is responsible for meeting the demand regarding appointment of the dean on the basis of seniority. Other demands are up to the Education Ministry."

KATHMANDU, July 25: Dr  Govinda KC, who had been staging a fast-unto-death demanding reforms in the medical education sector and... Read More...

Nepal’s divorce law is unfair to men
19 hours ago