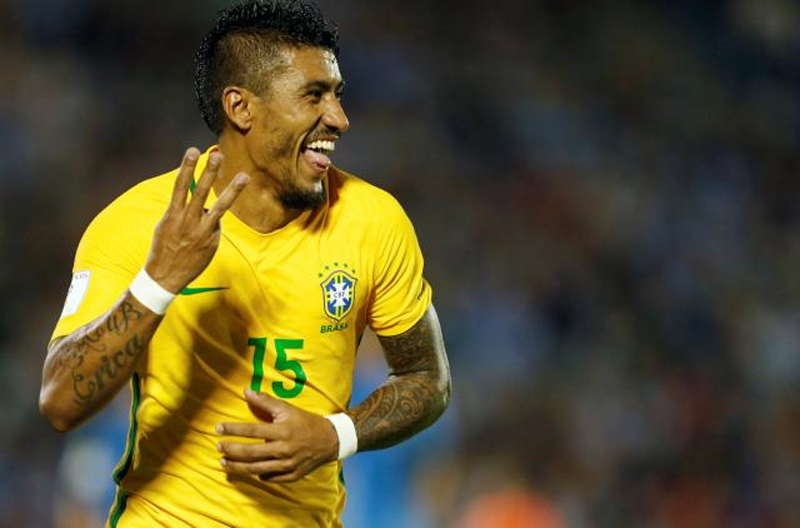 Brazil recovered from conceding an early goal to beat Uruguay 4-1 in Montevideo on Thursday, with Paulinho grabbing a hat-trick in a win that all but cemented their place at next year's World Cup finals.

The victory gave Tite his eighth win in eight games as coach and lifted leaders Brazil to 30 points in the South American qualifying group, a tally that has been more than enough to guarantee qualification in previous campaigns.

"We work hard every day and so this isn't an accident," Paulinho said of the three points and three goals, his first professional hat-trick.

"We played a great game and got a great win. We knew how difficult it would be here. We went behind, but we kept our concentration and we had the coolness to go after a result.

"Now we need to keep it up and I am sure this team has a lot more to offer."

The five-times World Cup winners led second-placed Uruguay by four points before the game but it was the weakened home side that took the lead after eight minutes thanks to a penalty from Edinson Cavani.

Marcelo tried to chest down the ball to his keeper but Cavani nipped in to intercept and was pulled down by Alisson. The Paris St. Germain striker got up to rifle the ball home low to Alisson's right.

It was the first time that Brazil had gone behind since Tite took over as coach last summer and it only took them 10 minutes to show they would not be bowed.

Neymar laid the ball off to Paulinho in midfield and the former Tottenham midfielder hammered home a spectacular right-foot shot from 30 yards out.

When Brazil took the lead six minutes into the second half it was again Paulinho who did the damage.

Goalkeeper Martin Silva could only parry Roberto Firmino's shot from the edge of the box and Paulinho was on hand to knock the rebound home from six yards.

Neymar had a quiet game but he got Brazil's third with 16 minutes to go when he seized on a long ball to outrun Sebastian Coates and deftly lob the stranded Silva.

Paulinho got his third and Brazil's fourth in injury time when he cheekily chested home a cross from Dani Alves.

In the evening's earlier match, Colombia beat Bolivia 1-0 in Barranquilla.

James Rodriguez got the winner from the penalty spot after 83 minutes to lift Colombia in to third place in the qualifying group with 21 points.

Paraguay also took three points to move into seventh place in the 10-team group with a narrow 2-1 win over Ecuador.

The top four teams qualify automatically for Russia 2018 and the fifth-placed side go into a play off with a team from Oceania.

Feb 4: Aaron Ramsey scored a hat-trick on Saturday as Arsenal thrashed Everton 5-1 in the Premier League at the... Read More...

I will get trust vote with the support of CPN (Unified Socialist): Bagmati CM Shakya
18 hours ago

Four arrested with Red Panda hide, two others with musk
41 minutes ago

President confers decorations and awards on 903 individuals
1 hour ago