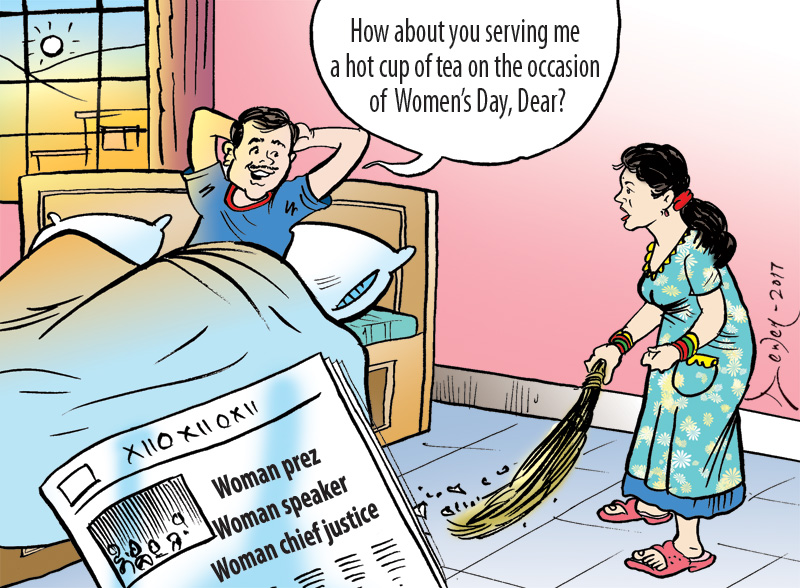 If this day is to celebrate your and my achievements, then it does not need to be marked in the calendar
I have enjoyed few perks here and there as a woman. While diversity is the way to prosper in every workforce, being a Nepali woman, I was given a lot of opportunities but that always made me question my merits and why shouldn’t it? We live in a country that celebrates Women’s Day, looks in awe when a woman is in a powerful position, celebrates little women achievement, feels very progressive to have a woman president and our definition for women empowerment is equivalent to women employment.

There are numerous associations, INGOs, NGOs, business houses, and women ambassadors for women empowerment who have not only given their time and effort into this but made a career a living out of this very important subject. This article means no disrespect to these women, but this is just a thought trigger.

We live in a society where we crave for attention, face value is very important to us and we seek approval and admiration of our spouse, neighbors, our colleagues or any object that moves. It is scientifically proven that women are suckers for approvals and what “they think” is important to us. Without straying away from our traits today, Kathmandu, like last year or the year before, will be lit up with overwhelming women empowerment talks, people from diverse backgrounds will talk about their accomplishments as a woman and what they have done or built to help this noble cause. The media will be overwhelmed with women empowerment and we will almost feel like wow “Nepal” has come a long way. The rallies in the capital and several award functions will mesmerize and trick us all. But all that glitters is not gold.

My ancestral roots are from mid-west which automatically generates curiosity in this particular region, the region that accounts to 23% of our population. In 2005, the Supreme Court banned chhaupadi. However 95% of women in Accham and 78% of women in mid-west and far-west practiced chhaupadi, as of 2014. This is alarming and our efforts and resources need to be invested on this. Chhaupadi breeds the idea of periods being shameful and negative. Therefore, womanhood being negative further reinstates women as a second class citizen. This is not just prevalent in mid or far-west, but also in Kathmandu and in other cities. Women here do not enter temples or kitchen during their periods. I have walked into the so-called “intellect” and “refined class” households in Kathmandu and this practice is still predominant in their households. Till the time acceptance of these biological phenomena without restrictions does not prevail, no level of women empowerment activities or discussions in the capital will change anything.

Another very alarming issue that Nepal faces today is women and girl trafficking. Organizations like Maiti Nepal have been forthcoming in stopping such activities. However, as per UNICEF’s report, 13,000 women and girls were victims to trafficking in 2014 alone. Other reports state that approximately 52 Nepali girls and women are victims of trafficking every day. While we enjoy our public holiday on the 8th of March and attend events on women achievement around Kathmandu, some parts of Nepal will be losing its pride.

The question then really is what is Women’s Day? If this day is to celebrate your and my achievements, then it does not need to be marked in the calendar. But if it is beyond that then there needs to be work done in every household and every part of the country before we rightfully claim this day. We demand 8th of March a public holiday because it is International Women’s Day and we are a very “progressive society”. However, our progressiveness does not shine through our data. Why is there increment in the number of women and girl child trafficking, why are we still making headlines in the New York Times or Al Jazeera while losing our daughters and sisters to Chhaupadi? Isn’t that where we demand our head of state spend her time and resources in rather than attending women achievement awards and hosting luncheons? Isn’t that where we demand our female activists, media, business women, women empowerment ambassadors, leaders spend resources than host talk shows and rallies in Kathmandu?

When I proudly announce that our president, chief justice and the speaker of the house are all women in international forums, I often question myself on what that pride is really about. Is it simply because they are women? I am sure any self accomplished woman like Sushila Karki, Sapana Pradhan Malla or Ila Sharma would not attribute their success to their gender. They are there because they are good at their job. Why do we, as a society, try and steal their thunder by playing the gender card? Why do we have to celebrate women’s achievements on the 8th of March, a concept stolen from others or introduced by the UN while there are enough original problems in Nepal which demand local solution? How about eradicating chhaupadi and women trafficking and marking that particular day as a day significant to humankind in Nepal?

The author is the Executive Director at Nepal Republic Media