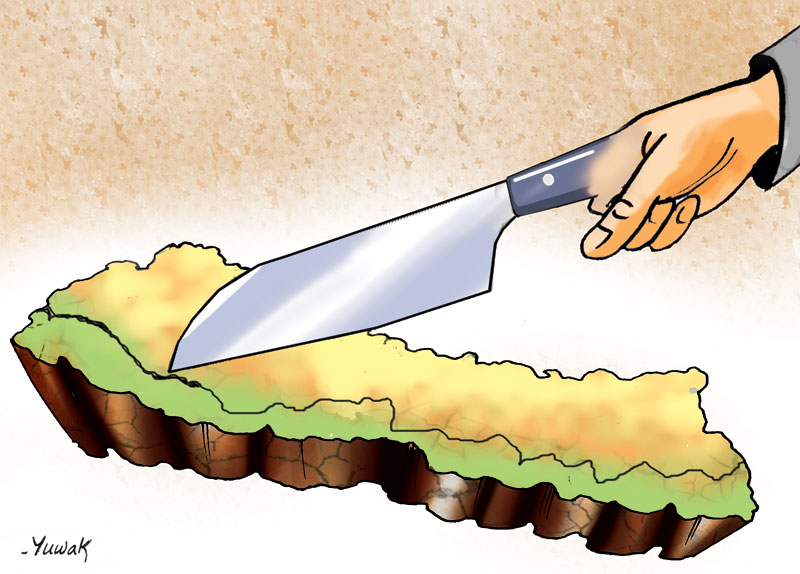 Madheshi Morcha leaders echo CK Raut on several fronts, with only slight variances in their tone and phraseology
You may wince at the title but some in Nepal have been using threat of secession as a bargaining chip to establish their ‘political’ agenda. This is ugly, wicked, immoral and unpolitical. But this is what they have been doing. Consider the following.

In one of his propaganda videos, the so-called secessionist leader CK Raut addresses Madheshis by saying: ‘We have been enslaved by firangis. The firangis will never grant you civil rights. If you have acquired citizenship they will confiscate it; they won’t let you vote in the election even if you have citizenship; if your name has been entered in voter list, they will remove it. This is why we must secede from Nepal’.

The audience does not cheer. It listens curiously.

Raut calls hill and mountain dwellers firangis (the derogatory term Indians used for the British during the colonial era), who have ‘colonized’ Madhesh for centuries. We have never been free. We need to wage war against firangis and win, he tells them.

Raut has tried to push secessionist agenda in every possible way he can. He tweets almost every news report, article and statement (negative, positive or neutral) which mentions him. If positive, to show how his agenda is gaining ground; if negative, to show how firangis are continuing with their oppressive measures. He tries to give the impression of being a Nepali avatar of Mahatma Gandhi and Martin Luther King Junior.  But he is full of vitriol against non-Madheshis.

There are parallels between his and Madheshi leaders’ way of inciting innocent masses.

Therefore it is a now or never battle for freedom, Madheshi leaders told the masses during the blockade.

Both like to impress that Madhesh has been invaded by Pahades and it needs to be free.

Madhesis leaders tweaked population statistics. They said they account for more than 50 percent of the country’s population. South Asia Fact Check has established that Madheshis account for only 19 percent of Nepal’s total population.

Madheshi leaders have no regard for what the people in the districts they want to include in Madhesh provinces have to say. Except in Province 2 (a predominantly Madheshi-dominated province), elsewhere the majority of people want their provinces to incorporate parts of hill and Tarai plains because of resource complementarities, north-south cross-flow of people and geographical interdependence.

The government has proposed to hive off hill districts from Province 5 in the constitution amendment bill. People of Province 5 are dead set against it. Yet Madheshi Morcha has reservation on even this. They want the plain areas of Province1 and Province 7 to be separated from hills right now or to create the ground for this in the future.

To insist that certain parts of Tarai must be completely separated, despite fierce opposition by people from respective places, to threaten not to participate and to disrupt polls, to warn not to accept the verdict of the parliament if it does not endorse the amendment proposal, and to threaten with ‘unimagined’ consequences if this particular demand is not met, to me, reeks of secessionist tendency. This sometimes leads us to the conclusion that Madheshi leaders also have tacit support for secession.

Madhesi leaders have reservation over proposed amendment on citizenship which seeks to make the process of acquiring citizenship for Indian brides married to Nepali men even easier. They want all the conditions on naturalized citizens lifted. You can fulfill this demand only when you consider Indians married to Nepalis as Nepalis but you cannot do so precisely because Indians are Indians, Nepalis are Nepalis.

At times there seems to be collusion between Madheshi forces and Raut. The latter radicalizes the masses by pointing at the failures of Madheshi forces to push for Madhesh as a separate country. And to give their agenda the color of moderateness, they point to CK Raut’s extremism.

When asked why it is not possible to soften their stand on province demarcation the response of Madheshi leaders has invariably been: We need something to show to the Madheshi people before we accept polls. You need to understand our ‘compulsion’. If we turn soft and agree on certain degree of hill-plain interdependence, CK Raut will hijack our space.

Some argue that creating federal province is not like creating a separate country. The Pahades do not understand even this much, they argue. From the arguments for and against federalism over the past decade, people have understood some of how federalism works. In a way, having a separate province is like having a separate country. People’s allegiance and loyalty to the center becomes secondary in federal system. Each province will be guided by its own laws and policies on health, education, economy and development.  It is not wrong, therefore, of people to demand that places they have inhabited for years remain intact while federating the country.

In the past few years, Madheshi leaders have demonstrated that their only goal is separation of Tarai from hills. They have rarely spoken in favor of expediting the process of budget utilization for Madhesh. And on vital reforms, they have often stayed mum.

Bikas Kumar Tiwari went on hunger strike in last December demanding reforms in health sector. None of the Madheshi Morcha leaders drew the attention of the government in Kathmandu to address Tiwari’s demands. Some civil society actors in Janakpur went on hunger strike recently demanding faster development of Janakpur, but not a single Madheshi leader was heard speaking in their support. Infrastructure projects like Kathmandu-Nijgadh fast-track, postal highway and international airport at Nijgadh can change the face of Tarai plains when they are completed. They rarely speak about it.

Sand and aggregate extraction in Chure base has raised specter of doom for entire Madhesh. None of them have spoken against it.

Both the likes of Raut and Madheshi leaders are using secession as a bargaining chip. At times it feels as if Madheshi forces are astride two boats, secession and separation of Madhesh, so that they can jump into the one they like when they have to.

Dear Madheshi leaders and friends who believe in them, you believe the only way out is total separation of Tarai from the hills. For others (like this scribe) it is possible to retain hill-plain coexistence and interdependence even in a federal setup. You have made your position clear. We are not going to budge from our conviction. We have literally wasted past ten years disputing each other. Let us test our ideas at the court of the elections.

Let’s ask people who among us is right. Let elections happen.

Madheshi leaders warn of the worst if constitution amendment fails. But bad actions always meet with bad outcomes. When you start with unrealistic and false promises, you not only lose people’s faith in the long run but also threaten your own existence. Look at the Maoists. Twenty-two years after they launched ‘People’s War’ and ten years after they joined mainstream politics, they are struggling to justify the bloody conflict.

In politics, madness and falsehood prevail over sanity sometimes but they do not endure. South Sudan seceded from Sudan in 2011. According to a recent New York Times report, South Sudanese today rue that ‘independence’. Such is also the case of the British who voted to ‘leave’ European Union in a referendum in June, 2016. Every form of extremism (whoever it is backed by) results in regret.

We realize the fallout of our follies when we have to confront them. But we must be cautious about them from right now because the damages will have been done by then, and these damages are often irrevocable.

Treating self-determination as a primary rather than secondary moral principle could have terrible results. ... Read More...