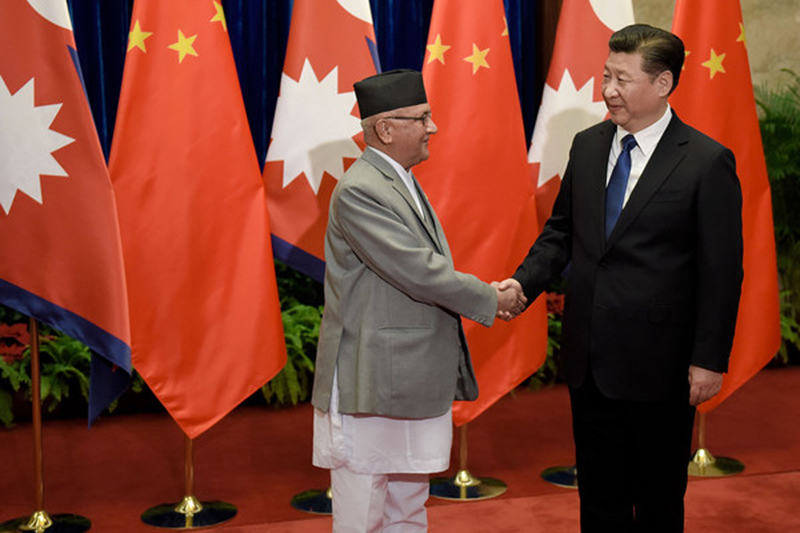 China backed Oli government with the hope that the alliance between the two powerful leftist parties would counter Indian influence in Nepal
If Chinese President Xi Jinping does not visit Nepal this year—and as of this writing he is unlikely to come, despite some media reports to the contrary—it won’t be surprising if we are inundated with news reports and op-ed pieces blaming Nepali government for it. Of course this is not to say that ours is a government that knows how to properly handle foreign relations, but the Chinese side is also as responsible for the postponement, cancellation rather, of the visit.

It is no surprise that both sides are misreading each other and sending confusing signals these days and as such it has complicated our relations. China views Nepal, and rightly, as a country that is indecisive, without clear foreign policy objectives, and ruled by leaders who are only concerned about their own interests, whereas China is viewed by our leaders as a country that wants us to commit to things that are simply not possible in our context, or at least in the present political set-up.

Ask Nepali scholars and politicians about our relations with China and you are guaranteed an hour-long lecture on the history of it, but they hardly talk about how the relations should be managed in today’s changed context in our immediate vicinity and elsewhere in the world. We mistakenly believe that China views Nepal as falling under India’s ‘sphere of influence’ and it is fine with it and has no interest whatsoever in changing the status quo.
To prove it, our scholars quote Chinese leaders of the past who told our leaders to maintain good relations with India. But here’s what they do not get: it was said in the past. We have failed to understand that a country’s priority changes with economic development and with changing security concerns. Suffice to say we are in a time warp when it comes to China. We still think it views us exactly the way it did in the past and what worked before works now.

China under Xi Jinping is pursuing an assertive foreign policy. This was made clear during the central work conference on foreign relation held on November 28-29, 2014.

Consolidating regional leadership is one major focus of Chinese foreign policy these days.

Unlike the previous governments that followed Deng Xiaoping’s advice to hide their strength and bide their time, today’s China is emerging as a confident power that does not need to hide its strength and that clearly understands its national interests and has a clear strategy to achieve those.

Like all countries with functioning foreign policy, China too classifies its relations with other countries based on their usefulness and/or threat to China, whether it is related to trade or security. The more a country is deemed important, the more it is engaged, including with high level visits. Nepal is a country that the Chinese side knows is very important to its security concerns. It realizes that in case of a naval war in South China Sea or the Indian Ocean, say against a US-India alliance, it can use Nepali territory to threaten India with a ground war.

China wants us to realize our strategic importance and inch closer to it. It wants to help us prosper but it also wants our firm commitment to its interests. It wants the 1960 treaty of peace and friendship between the two countries reviewed to accommodate the changes in China, Nepal and elsewhere. It wants a strong enough government/ruler that will put into practice the commitments we have made to Beijing. Befitting a superpower, it wants to become an influential player in our domestic politics and it wants us to prioritize our relations with it over others.

In KP Oli, the Chinese saw a strong leader who could be trusted. Oil appeared strong, nationalist and someone who would not shy away from reaching out to China, not only in rhetoric but in actual practice. The Chinese confused him with the Nepali state. They saw someone who made sense and with whom deals could be signed. And as a way to send a strong message to India and other powers that China has now entered into a new era of bilateral relations with Nepal, we were told that President Xi would visit Nepal. But the Oli-led government was toppled and the new government was formed, many analysts believe, with Indian support, and it is yet to win China’s trust.

In this context the Chinese side must have felt that a high level visit to Nepal would be sending a wrong signal, i.e., China is fine with the Indian influence in Nepali politics.

Further, it seemed to have fully understood that the president’s visit would be interpreted by the new Nepali government as its great diplomatic success; and it rightly decided that it was a bit too early to allow that to the new government. Hence there is no likelihood of a high-level visit from China unless the Dahal-led government can prove that it has not been formed to undo all the far-reaching agreements signed with China by the previous government.

Furthermore, the Chinese side hasn’t forgotten the abrupt cancellation of visit to China by Dahal in 2009 as prime minister. China clearly saw it as a way of avoiding discussing the draft of a new treaty to replace the 1960 treaty of peace and friendship, a draft it had sent to Nepal for revision at the end of 2008. If Dahal thinks the Chinese side has forgotten it and he can charm it with rhetoric of friendship and hollow promises yet again, he is thoroughly mistaken. But more than that, the Chinese side will not forget that he is responsible for breaking the UML-Maoist alliance in which it invested heavily.

The Chinese side backed Oli government with the hope that the alliance between the two powerful leftist parties would counter Indian influence in Nepal and move Nepal closer to China. The last thing it expected was for Dahal to break that alliance, that too after it had repeatedly asked him not to do so. Therefore, it will be an uphill battle for Dahal to win Chinese trust.

As things stand now, for a major breakthrough in our bilateral relations, there are only two options. We either tell the Chinese side politely that we value our friendship with you as well as your continued support to our development effort and we will take your valid concerns seriously. But we cannot do what you want us to do, given our geopolitical reality—sort of saying, we will not go against you, but we cannot go along with your strategic designs as well.

Either that or the Chinese side supports another revolution in Nepal and installs a pro-China government after the political change so as to replace India as the major player in Nepal. The choices are difficult for both the countries, but there is no other option.

Still hoping against hope, I do wish the Chinese president visits Nepal at his earliest convenience.