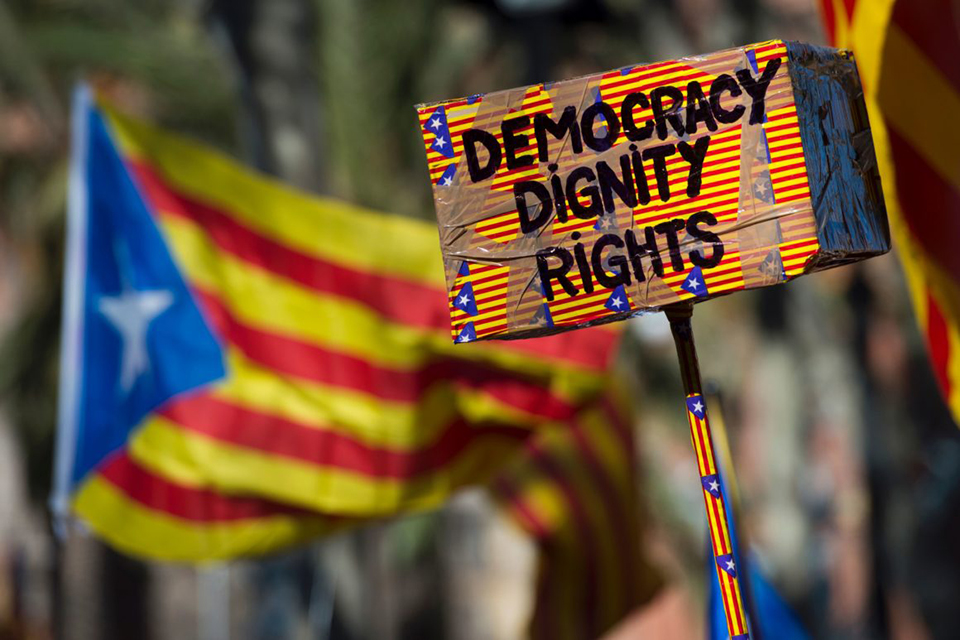 The malignant effects of identity politics should not be allowed to tear Spanish society apart.

BARCELONA: In the confusing aftermath of Catalonia’s messy independence referendum, the Catalan regional government’s president, Carles Puigdemont, has wanted to have his cake and eat it. His long-awaited speech to the regional parliament, in which he had promised to declare independence from Spain, ended up being a muddled effort to placate his radical nationalist allies, the Popular Unity Candidacy (CUP), without further alienating the central government in Madrid. He achieved neither objective.

Puigdemont did declare a Catalan state “in the form of a republic.” But he immediately “suspended” the declaration to allow for negotiations with the Spanish government. To the Spanish government, Puigdemont’s address was an implicit declaration of independence, and to the impatient CUP, it was a moment of inadmissible betrayal. It is now highly probable that the central government will invoke Article 155 of the Spanish Constitution, which allows it to take direct control of Catalonia, a step that would undoubtedly provoke more civil unrest throughout the region.

Historically, national independence has usually been achieved through violent, even cataclysmic processes of decolonization. New states have almost invariably been born in blood, sacrifice, and deprivation. In the case of the former Yugoslavia, independent states emerged out of civil war and even genocide. Enslaved nations have also recovered sovereignty through state failure and imperial collapse. Amicable breakups, like that of Czechoslovakia, or of Norway and Sweden, are a historical rarity, however laudable.
Catalonia’s bid for independence, as Puigdemont probably knows, lacks the compelling revolutionary élan that has characterized struggling national movements throughout history. Real, and sometimes imagined, grievances can explain the recent nationalist tide in Catalonia. But the independence project mainly reflects Catalan elites’ extravagant dreams of grandeur and condescension toward the supposedly inferior Spaniards. Those elites should now ask themselves whether their middle-class constituency is capable of enduring blockades, massive capital flight (which is already happening), a collapsing standard of living, and the enmity of both Spain and Europe.

In Iraq, the Kurds base their demand for independence on the claim that the Iraqi state is oppressive and failing. But Catalonia is not an oppressed nation, and Spain is not a failed state. Invoking Generalissimo Francisco Franco’s long dictatorship—now four decades in the past—is a feeble attempt to disguise the separatists’ economic pretensions and overblown sense of cultural superiority.

Such perceptions matter, because what frequently seals the fate of independence movements is the response of third countries. And it is all but unimaginable that any European country would see any political advantage in facilitating Catalonia’s independence, which would alienate a key member of the European Union and boost myriad nationalist movements across the EU and in nearby states.

Catalonia does have a legitimate dispute with the Spanish government over finances and the attributes of autonomy. But while the government in Madrid could have managed the Catalan conflict more wisely by addressing it politically, not just legally, the dispute comes nowhere near the threshold of justifying independence.

The “Catalan differential fact” is a historical reality; and it deserves to be addressed properly. Yet the persistent move toward independence appears to be driven mostly by the excitement and kneejerk responses of some of Catalonia’s leaders. At no point before or since the independence referendum have any of them offered an articulate explanation of why a separate Catalan state is necessary or what it would look like.

Would the Republic of Catalonia have its own armed forces? Would its own national currency replace the euro? How could it possibly persuade Spain and other EU member states not to veto its accession to the bloc? Which countries would risk alienating Spain by recognizing an isolated Catalan state?

Invariably, unless nations march virtually united to independence, they don’t get there. Catalonia is now almost evenly divided over the question, in a manner unseen since the Spanish Civil War. Only 43 percent of Catalonia’s population voted in the referendum, which even Barcelona’s mayor, Ada Colau, a supporter of statehood, has questioned as a foundation for a unilateral declaration of independence. Any vote not cast can legitimately be construed as a protest against the referendum—and a vote for unity with Spain.

Colau is right. To say that the referendum produced a clear winner, and to base a declaration of independence on that vote, is a travesty of common sense and of democratic norms that would tarnish the nascent state as a grossly illegitimate enterprise. Similar deep internal divisions doomed Quebec’s bid for independence—and Scotland’s as well. Even the Confederate leaders at the time of the American Civil War understood that without a unified people fully behind their bid for independence, their slave-owner’s republic was doomed. A shakeup of Spain’s political and constitutional status quo is long overdue, and the entire country could emerge stronger if the reforms enacted in response to the Catalonia crisis help unleash the energies of one of Europe’s most diverse nations. But this is no time for petty minds and narrow visions. The malignant effects of today’s identity politics should not be allowed to tear Spanish society apart in the way that ideological politics did 80 years ago.

The author is a former Israeli foreign minister

KATHMANDU, Nov 19: Senior leader of the ruling Nepali Congress (NC) Ram Chandra Poudel has come down heavily on his own... Read More...

KATHMANDU, Sept 15: The Department of Civil Personnel Records has unveiled the number of civil service employees who have not... Read More...