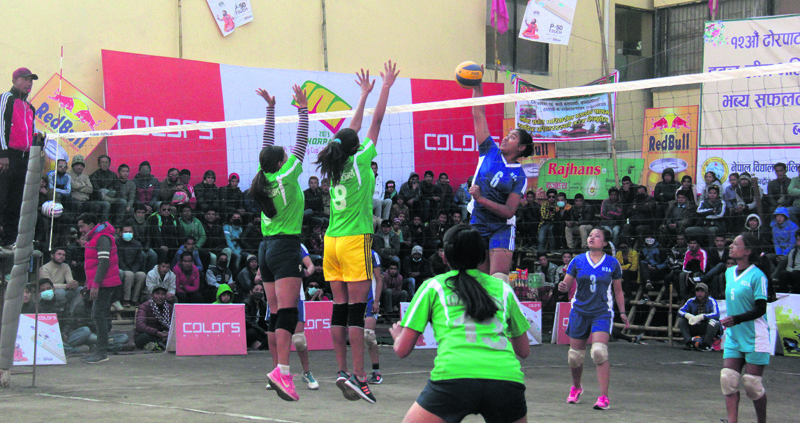 Reed Model, studded with majority of Indian players, overcame Bijeshwari Gyan Mandir and Nepal Police Club to move on top of the standings. After playing seven matches, Reed Model has earned equal 21 points as that of defending champion Armed Police Force (APF) and New Diamond Academy. However, Reed Model holds superiority over them by the virtue of wins in fewer sets.

Reed Model on Sunday registered a comfortable win of 25-6, 25-4, 25-6 over Bijeshwari and 25-7, 25-12, 25-20 over Nepal Police Club. It has not lost a single set so far in the tournament. Following his team's comfortable win over Police, Reed Model coach Khum Gaunle said that the match was not as tough as expected. “We were under pressure not to lose any set in our fixture against Police. However, we easily won the match in straight sets. Now we can strengthen out title bid if we win next two matches,” he said. Reed Model will next take on host Dhorpatan and Tribhuvan Army Club on Monday.

In other fixtures of the same day, APF will vie with New Diamond. APF is the champion of last four editions while New Diamond has settled as runner up in all of them. The outcome of Monday's fixture between APF and New Diamond will have impact on the title race and co-incidentally both of them have lost their first leg match against Reed Model. However, the winning side on Monday will have chance to fight back against Reed Model for the title.

New Diamond coach Kumar Rai is well aware of it. “The match between APF and New Diamond is like the final. We could make a comeback for title race only if we beat APF tomorrow. We came under pressure after we lost in straight sets against Reed Model. We were defensively weak in the match and we could beat APF if we improve that aspect tomorrow,” he summed up.

New Diamond has overcome APF in the final of the last two tournaments played in Pokhara and Kathmandu. However, in a friendly played in Hetauda last month, the outcome was the opposite.

Following the outcomes, Western Region stands fifth in the standings with 15 points.