12 daughters, and still waiting for a son 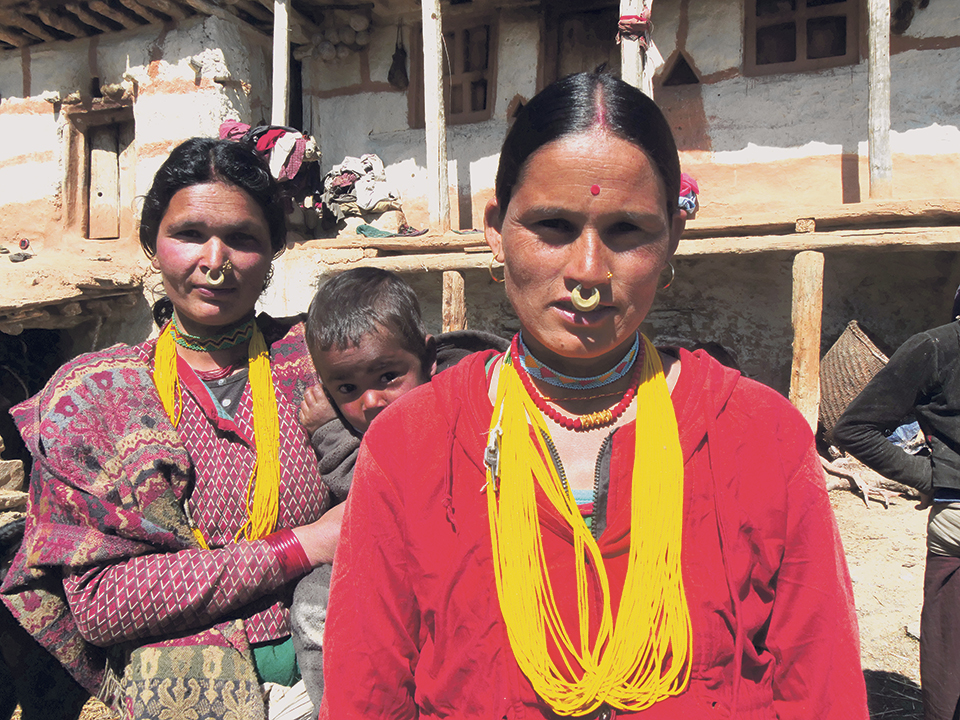 Local women of Tajkot Katel Gaun in Surkhet with their babies in this recent photo. Women in this district are forced to give brith until they bear a baby boy. Photo Courtesy: Navaraj Mahatara

BIRENDRANAGAR, Sept 19: Sharmila Jaisi, a local of Tajkot Katel Gaun, got married at the age of 16. Sharmila, who is now 35 years, has conceived 12 babies so far. She has given birth to seven babies and has undergone abortion five times.

Sharmila was not interested in giving birth to this many children, but a persistent pressure from her husband and her family led her to give birth unwillingly. Sharmila is pregnant again in hope of giving birth to a son.

A friend from her village, Dana Jaisi, has also given birth to eight children already. Dana also gave birth till she was 38 in hopes of giving birth to a son. Dana admits that she is now fed up with her life. The vicious cycle of pregnancy symptoms and the nauseating feeling has made her sick.

Dana and Sharmila are just two cases in point. Many other women in the village are forced to risk their own lives to conceive a baby boy.

There is a tradition in the village to allow only son to light the funeral pyres due to which women are put under immense pressure to continue giving births until they give birth to a son.

Baisagi Jaisi, who is 51 years and has five daughters, is another victim of pressure to unwanted pregnancy. “I did not want more than two children,” she says.

“We are considered as child production machine men. We are forced to live our entire lives to fulfill the desires of men,” she lamented.

She added that the society that runs on hope of having a baby boy is least concerned of the mother, who has to go through multiple health risks to conceive a boy.

Sharmila recounts the horror of severe loss of blood after her third pregnancy until the eleventh.

Nandakala Khadka, another local from the same village also has similar experience. “Men are expected to perform every important task from lighting funeral pyre to ploughing field. Until and unless, we do not involve women in these mundane tasks, daughters in our society won't get the same respect and love that the sons get,” she argued.

Youths in Rolpa resorting to unsafe abortion instead of using contraceptives