Arsenal shoved Chelsea off the top of the table but Leicester City's Jamie Vardy, with a dazzling hat-trick, was the man of the moment on Saturday as the struggling Premier League champions blew aside Manchester City 4-2.

With Chelsea chasing a ninth win in a row when they host West Bromwich Albion on Sunday, when third-placed Liverpool also host West Ham United, Arsenal seized their chance to take the overall lead by beating Stoke City 3-1 at the Emirates.

The London rivals are now tied on 34 points, and have the same goal difference of 21, but Arsenal edged ahead with 36 goals scored to Chelsea's 32.

Vardy, hero of last season's fairytale title triumph, finally ended his 16-match goalscoring drought for the club with a brace in the first 20 minutes at a rainswept King Power Stadium.

The Foxes, making a nonsense of their miserable recent form, raced into a three-goal lead against Pep Guardiola's expensively assembled side and England striker Vardy completed his first Premier League triple in the 78th from the tightest of angles.

"It was the true Leicester today, maybe because we have played so badly in our last few matches, but today we were so strong," happy manager Claudio Ranieri told the BBC.

"I am very pleased for Jamie. When he finished I said 'Oh, welcome back'."

Manchester City stayed fourth on 30 points and risk being overtaken by Tottenham Hotspur, who take on Manchester United at Old Trafford on Sunday, while Leicester moved up to 14th on 16 points.

On a bumper day for goals, the Premier League saw six home sides score three or more times on a single day for the first time since May 1993.

The goals kept coming at Arsenal, where a rash challenge by Granit Xhaka on Joe Allen gave Charlie Adam the chance to put Stoke ahead from the spot, on the Scot's 31st birthday, and he despatched it without fuss.

Goals either side of halftime by Theo Walcott and Mesut Ozil, who netted with a rare header, put Arsenal back in front against a side that had never taken a point off them at the Emirates.

Walcott stabbed in Hector Bellerin's low cross for the equaliser three minutes before the break and Ozil's looping header made it 2-1 five minutes after the interval.

Substitute Alex Iwobi then ran through to give Arsenal the two-goal victory they needed to top the table.

At the bottom, troubled West Ham United plunged into the drop zone without kicking a ball after Swansea City won 3-0 at home to Sunderland.

The defeat ended Sunderland's run of three wins in four games and sent them back to the basement on 11 points while Swansea clambered clear on 12 and ahead of the Hammers on goal difference.

Swansea's goals came courtesy of a Gylfi Sigurdsson penalty in the 50th and a brace from Fernando Llorente.

The win was Swansea's second under American Bob Bradley, the favourite with British bookmakers to be the next Premier League manager to lose his job, and made it back-to-back victories at the Liberty Stadium for his team.

Hull City, who drew 3-3 at home to Crystal Palace, are second from bottom and also on 12 points.

That match was Alan Pardew's 300th as a Premier League manager and the Palace boss could crack a smile at the end with Fraizer Campbell grabbing an 89th-minute equaliser to ease the pressure on him.

Hull, who came from 2-1 behind with goals from Adama Diomande in the 72nd and Jake Livermore six minutes later, had been looking good for a win that would have taken them out of the bottom three.

Burnley scored twice in the space of three first-half minutes to beat Bournemouth 3-2 at Turf Moor in the first Premier League meeting between the sides, ending a run of three defeats in a row for the home side.

In the early kick off, Watford beat Everton by the same scoreline for their first victory over the Merseyside team since 1987 in any competition. 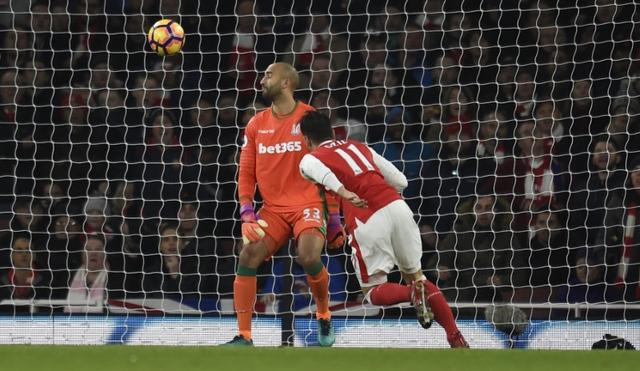 Feb 4: Aaron Ramsey scored a hat-trick on Saturday as Arsenal thrashed Everton 5-1 in the Premier League at the... Read More...

LEICESTER, Aug 20: Leicester is still searching for the first win of its Premier League title defense after drawing 0-0 with... Read More...

MCC compact agreement cannot be amended only for Nepal: FM Khadka
19 hours ago