Re-arranging the response to climate change impacts in Nepali agriculture 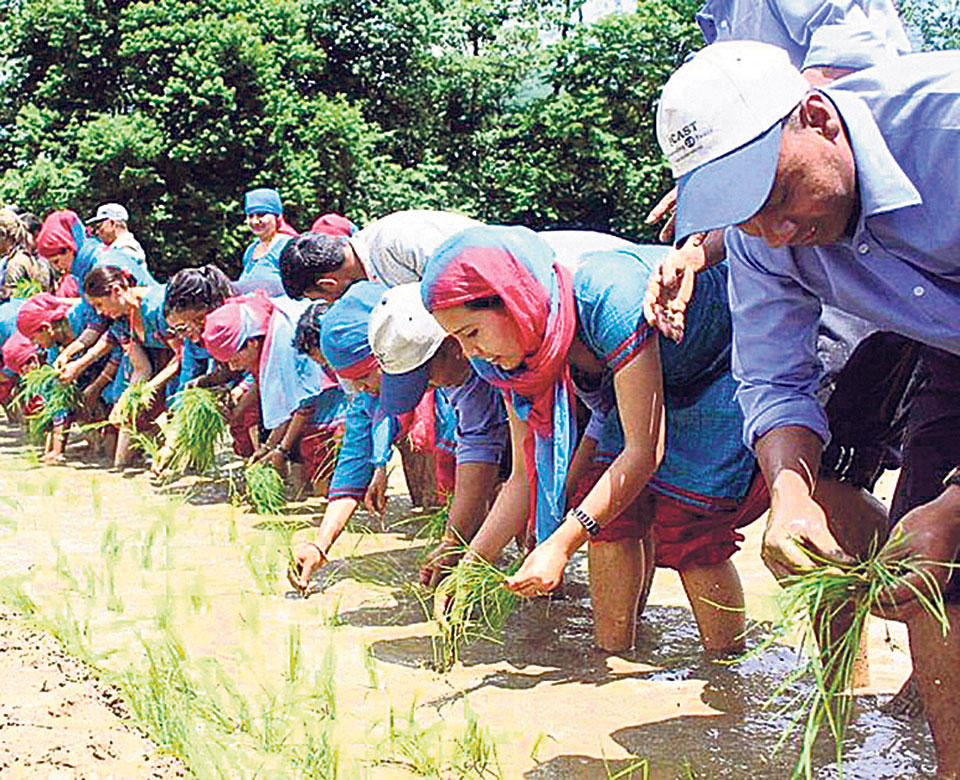 The FAO has focused its efforts and resources to addressing issues stemming from climate change in Nepal in order to cope with the changing situation and build resilience capacity into adaptation to climate change.

Agricultural productivity growth in Nepal has been limited or slowed down during the last two decades partly due to dependency of farming on rainfall and vulnerability of production systems to natural disasters related to climate change and other shocks. Productivity growth for crops have been modest ranging from 20 percent for maize, 25 percent for cereals, and around 40 percent for pulses and oilseeds in the last two decades.

Similarly, yield increases for potatoes and vegetables were marginal, while fruit yields declined by seven percent. Likewise, cropping intensity remained broadly flat. In the livestock subsector, productivity increased by modest 24 percent for eggs and eight percent for milk and goat and sheep meat, while poultry meat productivity declined by seven percent. In terms of vulnerability to climate change, Nepal is ranked fourth in the world. Every year, floods spread across the mid-hills and the southern plains leaving tens of thousands of houses and vast areas of farmland and roads destroyed.

Seeing the above problems, Food and Agriculture Organization of the United Nations (FAO) has in recent years focused its utmost efforts and resources to addressing issues stemming from climate change in Nepal in order to cope with the changing situation and build resilience capacity into adaptation to climate change. For example, FAO implemented a project Reducing vulnerability and increasing adaptive capacity to respond to impacts of climate change and variability for sustainable livelihoods in agriculture sector in Nepal in cooperation with the government from 2015 to 2019. Toward the end of project implementation, the final report recommended institutionalizing climate farmers-field-school approach in Agricultural Knowledge Centers and undertaking phase wise implementation in pocket areas in close coordination with and support from local governments to support intensive promotion and replication of climate adaptive agriculture practices.

To dissolve the paramount threat of climate change on agri-production, Nepal has developed and adopted a policy level provision under the National Adaptation Programme of Action to climate change (NAPA), which has opened the door to act adaptation activities in the country. Local Adaptation Plan of Action (LAPA) national framework is also devised out to support implementation mechanism by local government level to act on climate change adaptation and risk reduction. Further down, community-based adaptation plans are advocated for poor and vulnerable communities with less capacity and more dependent on natural resources for their livelihoods to cope with disasters.

From a long-term perspective and tapped on several decades of work experience in Nepal, the FAO has been using Climate-smart agriculture (CSA) as an approach for developing agricultural strategies that guide the actions needed to re-orient agricultural systems to effectively support development and ensure food security in the changing climate in Nepal. The CSA is in line with the provisions spelled out under the NAPA and the LAPA, which provides the means to help stakeholders from local to national and international levels identify agricultural strategies suitable to their local conditions. For this reason, FAO Nepal is also preparing a project entitled promoting transformative and climate resilient agriculture for sustainable livelihoods and food security in Nepal (CRA), a project currently in the pipeline of Green Climate Fund (GCF), with the expectation to tap on its funding of around 40 million US dollars for project implementation.

The most recent work of FAO in Nepal on climate change is a study on Supporting Climate Smart Agriculture Investment Planning in Nepal (CSAIP) in collaboration with the World Bank to support the Ministry of Agriculture and Livestock Development (MOALD) to identify future collaboration and investment opportunities in Nepal’s agricultural sector. The study is also a key element of FAO’s Hand in Hand Initiative in Nepal, which is being implemented to fulfill the UN Secretary-General’s vision to bolster the UN system’s data management and analytics, integrated policy services, partnerships, and financing investment, primarily by re-allocating the system’s assets and capabilities to more effective collective action by diverse partners.

The core approach of the CSAIP study is to build on existing knowledge and policy goals, foster dialogue, and provide an assessment of client capacity to operationalize country climate commitments and support implementation of the Agriculture Development Strategy (2015-2035) within the new federal structure. The focus of study is three key areas within the three river basins, covering four provinces—Province 1, Province 2, Gandaki and Karnali. It focuses on the key agriculture and value chains systems, providing a good representation from across the country in terms of climate vulnerable areas and systems.

The CSAIP has identified substantial opportunities for putting Nepal’s agriculture on a sustainable pathway, which is also focused on elaborated investment opportunities in field crops, horticultural crops, livestock, fisheries and aquaculture and agro-forestry including non-timber forest products. The CSAIP package in Nepal aims at creating an enabling environment for productive and commercial agriculture that is climate responsive and resilient from non-climate shocks.

PHOTOS: Not paid by sugar mills for past six years, cane farmers stage protests in Kathmandu

KATHMANDU, Dec 13: Nearly a year after their agreement with the government in which the latter expressed commitment to ensure... Read More...