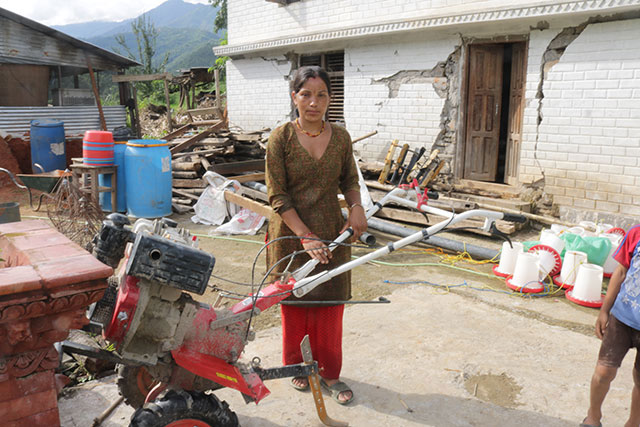 Over the years, the international community has come to the agreement that it is crucial to simultaneously assess and address the early recovery and rehabilitation needs of disaster survivors from the design phase of the humanitarian response. Doing so, it is recognized, ensures that there is a foundation from which to build up rehabilitation activities following the departure of actors in humanitarian assistance. Such thinking also encourages the efficient use of valuable resources and promotes the design of more sustainable activities. The response to the Nepal earthquakes is an example of how governments and their partners can design and undertake a humanitarian response which addresses immediate needs, yet also contributes to the longer-term resilience of households and communities.

Following the two major earthquakes on April 25 and May 12 in 2015, many international agencies moved in to support the government and people of Nepal to assess immediate needs and plan relief operations. The Food and Agriculture Organization of the United Nations (FAO) supported the Government of Nepal (GoN) to undertake an Agricultural Livelihoods Impact Appraisal (ALIA) to assess needs in the areas of livelihoods, agriculture, forestry and water resources. This survey highlighted very early recovery needs essential to the resumption of livelihoods in rural farming communities. FAO quickly responded with technical and material support to enable farmers to capture the planting season and resume crop production, in order to reduce food insecurity and dependence on food aid. The activities were focused both on addressing immediate needs and enhancing the resilience of agriculture-based livelihoods in the face of future disasters.

The rice planting season for 2015 was not lost in Nepal, despite the earthquakes occurring just prior to planting window and the heavy losses of stored seeds.  Within two weeks following the disaster, FAO distributed rice seeds to 42 000 households enabling planting to resume. Working closely with the GoN, FAO targeted households within the six most-affected districts of Gorkha, Dhading, Nuwakot, Rasuwa, Sindhupalchowk and Dolakha in coordination with local and District Disaster Reduction Committees and District Food Security Committees.  This was followed by distribution of wheat seeds to 25 000 households, maize seeds to 60 000 households and vegetable seed packets to 154 000 households.  An additional 4 448 households benefited from the rehabilitation of 75 damaged or destroyed Small Scale Irrigation Schemes (SSIS) covering more than 1 560 hectares of land. In response to findings of the ALIA, and at the demand of the affected households and recommendations of the local disaster and food security committees, FAO distributed farm machinery and tools to the affected farmers to reduce drudgery and overcome the challenges of labor shortage in food production.

Specifically, to promote household diet diversity and nutrition recognized in the ALIA and an Emergency Food Security Assessment undertaken by FAO and its partners, women-headed households and women’s groups were provided with the plastic tunnels and drip irrigation facilities to undertake off-season and year-long vegetable production.  Further activities included household food/seed storage facility provision and rebuilding of community stores, the introduction of alterative production technologies, and technical assistance for livestock health and safety. All activities ensured the participation of women farmers as the ALIA showed that heavy out-migration of men was affecting labor availability, and ultimately crop production, even before the earthquakes.

Working closely with the Government of Nepal, the FAO Emergency Response Operation was ultimately able to reach 1.5 million people with the generous support from the Governments of Canada, Norway, Belgium, and Italy. The humanitarian response was uniquely successful due to the inclusion of the ALIA recommendations which led to the design and implementation of interventions within the agricultural sector catered to the immediate, and early recovery needs of the affected communities. This approach to the Nepal Emergency Response is an example of how relief and early recovery needs can be considered from the onset of a disaster.

The lessons learned from the Nepal Response have been shared widely and will feed into improved disaster response in the future, both in Nepal and elsewhere. The recognition of the needs of rural farmers, who are so often disproportionately affected by disasters (typhoons, earthquakes, floods, droughts), within the immediate needs assessment will certainly be further mainstreamed going forward. With the closing of the Emergency Operation, FAO continues to support the GoN by enhancing resilience through capacity building and technical support at the national and district levels through its regular programs. FAO will continue to work with the GoN to address development priorities with a focus on resilience and disaster risk reduction at all levels.

Over the years, the government and international agencies have incorporated cash transfer as one of the components of social protection... Read More...

NGO operators in Kathmandu deny embezzlement of UK donation meant for treatment of street dogs, claim that they are not local board of KAT UK
13 hours ago

16 DIGs including all provincial police chiefs transferred
2 hours ago