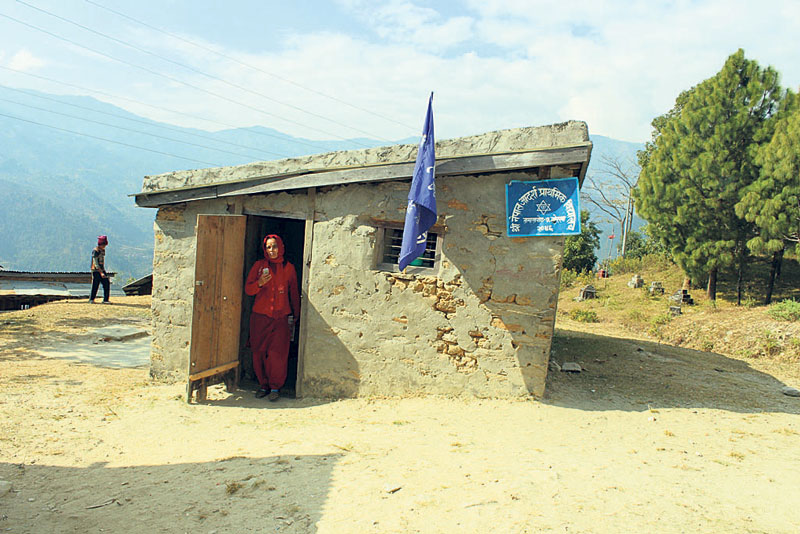 Mina Devi Dhakal, principal of the Nepal Adarsha Primary School, Lakuribot in Gorkha, stands in front of her school’s office which was earlier a toilet. Even now half of the building is used as toilet. (Narahari Sapkota/ Republica)

In lack of building, a school operates from toilet

GORKHA, Dec 5: Save the Children, an INGO, had shown interest to construct building of seven schools in Gorkha following the April 25 earthquake last year. According to the district administration office, the buildings needed to be built and handed over much earlier than now.

However, it is yet to deliver these buildings to the schools.  Students continue to study in tents and some are managing under open sky.

Good Neighbor International, another INGO, had taken the responsibility of constructing buildings for eight schools in the district. It also has not given any results either. Yet another organization Ganesh Himal Association’s performance is not different. Two school buildings that it was supposed to construct have not been constructed so far. Another organization, Youth Foundation Nepal, also had promised to construct building for two schools. However, school administration has not heard anything from it so far.

When District Education Office (DEO) chased these organizations, only some responded. Engineer at the DEO, Baburam Devkota, said that the INGOs have been working very sluggishly. “Even after a year of taking the responsibility to constructing school buildings, some of them have just tested soil and some have invited bids for construction. This is not even 10 percent of the work. With such pace, I don’t see any concrete results coming soon,” Devkota said.

According to Rana Bahadur Baram, principal of Antarjoyti Higher Secondary School, soil for building construction was checked by the Save the Children six months ago. Since thenn, he claimed, there has been no visible progress on constructing the school building. Children continue to study in tents, he said. “It has not started the construction so far.

We don’t know when they will start and when they will complete it.”
Amid these accusations, the organizations have their own woes. Of them the most pointed are time consuming bidding process, lack of prefab material suppliers and construction companies, among others.

While neither the government nor the I/NGOs that promised assistance have delivered their promises, students continue to study in tents. According to District Education Officer Dipendra Subedi, his office has not been able push I/NGOs for accelerating the construction process despite continuous follow ups.

“Some of these organizations have shown high handedness and negligence. Despite continuous follow ups, they have not shown encouraging progress,” he said adding that the office was mulling on recommending the Department of Education to take appropriate action against organizations that have signed contract but are not working as agreed.
I/NGOs were expected to build schools and hospitals in a short span of time using prefab materials. But their inability to meet the expectation has dejected the district’s education and public health office.

“Our hospital building was supposed to complete by now, but all the contractor asks for is time. While they continue extending the construction time, we are forced to deliver health services to patients from tents,” said Nani Babu Dani, a health assistant.

This is just an example. Nepal Adarsha Primary School has been operating its administration from a building meant for toilet. The school in Lakuribot has become a laughing stock for visitors. But there is no way for the school to address the problem in lack of a building.

“This is not just our problem. Schools in Gorkha were totally destroyed during the earthquake. Most of these schools have not been reconstructed so far,” Mina Devi Dhakal, principal of the school said adding that it is hard for the teachers to sit in the office.

She informed that half of the building still serves its original function. “Foul smell of urine is in the air all the time, but there is no way we can avoid that.”

SINDHULI, Jan 22: The long-delayed reconstruction process which had finally picked up pace has again been halted with the sudden hike... Read More...

15 dead, 24 wounded in school shooting in Russia
56 minutes ago