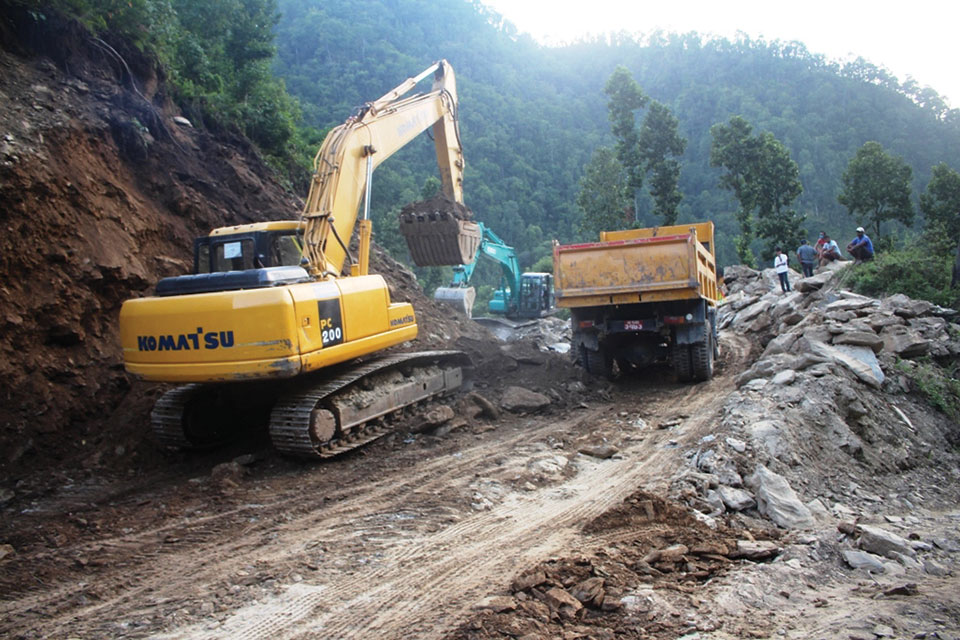 An excavator works on the Barpak road in this recent picture. Photo: Republica

GORKHA, May 17: Snail paced progress on the blacktopping of road in Barpak, the epicenter of the earthquakes of April 2015, has left the locals to continue with travel woes. The project was supposed to complete by now, however owing to the dillydallying by the contractors, not even the graveling of the road has begun so far. With the onset of monsoon season, dusty roads of this area have now become even worse.

“The road has become even riskier and difficult to ply than earlier. Its condition has worsened so much with the rain that it takes over five hours to get through it. Had it been smooth, it would have been a matter of just one to two hours,” lamented Jit bahadur Ghale, a local of Barkpak. “It is the reflection of the government’s apathetic attitude towards us. Poor road has given us multiple problems,” he added.

“We are pretty sure that the delay is due to collusion between government officials and the contractor.  If government officials, engineers and technicians have not taken bribes from contractors, why can’t they make them work on time? Why are we all facing all these miseries? Why does not the administration make them accountable?” Ghale fumed.

Upgrading and blacktopping of the 46-kilometer long Chhewetaar - Bhaluswara - Barpark road has come under severe criticism from the locals who use it frequently for several purposes. Even though local bodies have come to existence, locals still require visiting the district headquarters quite often.

“We use this road to go to market, hospital, district headquarters and other places. We cannot avoid this route. But the road is very risky and deadly to ply on,” Ghale said.
Yam Bahadur Gurung, another local of Barpak reported that vehicles frequently get stuck in the muddy road. “With the rain, tractors, bus or bike, nothing can get through the road now,” he stated.

Locals claim that the poor state of the road has also affected ongoing reconstruction works in Barpak. Ghale said Barpak residents have not been able to complete construction of their house in lack of necessary materials. He said that most of the residents expect that cost of construction materials will go down considerably once the road is black topped.

“Besides the cost of aggregates, you have to pay around 35,000 for transporting it to your house because of the poor condition of the road. Transporting bricks, sand, rod, is equally costly,” lamented Ghale.

Ghale is among thousands of quake victims of Barpak. His entire settlement had turned into rubbles during the earthquakes. Since after the disaster, Ghale has been living in a makeshift hut just like thousands of other quake victims.

The road construction had kicked off before the earthquake. However, it had not taken pace. After the earthquake, concerned authorities cited earthquake as the reason behind the delay. However, the road was expected to complete within two years of the calamity. “But this has not happened. We have been living in huts for three years. We have not been able to build house. People are suffering but the condition of road is getting worse,” Ghale maintained.

While locals put the blame on government officials and contractors for delay in the blacktopping of the road, an engineer associated with the contractor, Rasuwa Surya JV Company, begs to differ. The engineer Saugat DC cited several reasons behind the obstruction.

“Even the locals have not been cooperative,” he claimed. “They did not allow us to excavate necessary construction materials from the rivers. The progress of the project has been often affected by lack sand, stones and aggregates,” he added.

He informed that the project is divided in four packages and budget has been released accordingly. “There are several problems we facing in completing the project. In fact, we have asked for some more time to complete the project,” he said.

According to Bishnu Bhatta, chairperson of Barpak Sulikot Rural Municipality, the road project is not likely to complete anytime soon.

“With the onset of the rainy season, no one will be willing to work on the road. The contractor should have kept it in mind and worked in a rush earlier,” said Bhatta.

SINDHULI, Jan 22: The long-delayed reconstruction process which had finally picked up pace has again been halted with the sudden hike... Read More...

Nepal's economy is not likely to be Sri Lankan, but it is possible: Former Governor Chhetri
26 minutes ago