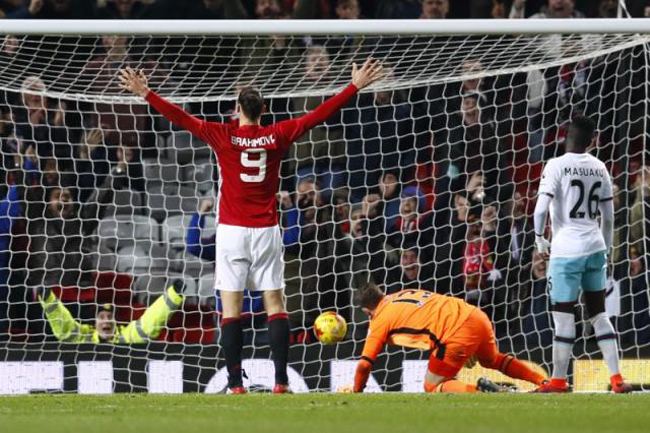 Anthony Martial and Zlatan Ibrahimovic scored twice each to help Manchester United ease into the League Cup semi-finals with a 4-1 home victory over West Ham United on Wednesday as Arsenal suffered a 2-0 home defeat by Southampton.

Martial netted twice in the second half to take the tie at Old Trafford away from West Ham, who had leveled through Ashley Fletcher following Ibrahimovic's opener after two minutes. The Swede added the fourth deep into stoppage-time.

Southampton clinched their first appearance in the last four of the competition since 1987 with powerful first-half efforts from Jordy Clasie and Ryan Bertrand against a weakened Arsenal, who made 10 changes to their side.

United were then drawn to face Hull City in the semi-finals and Southampton will play Liverpool.

United and West Ham met at the same venue in the Premier League on Sunday when United boss Jose Mourinho let his frustrations boil over and earned a second touchline ban of the season for booting a water bottle.

The Portuguese was banned from the dugout on Wednesday, but would have been delighted with the way United carved open their opponents after just two minutes with a fluent break.

West Ham opened the scoring on Sunday equally early, but they were caught cold as Wayne Rooney, one goal short of Bobby Charlton's all-time club scoring record, fed Henrikh Mkhitaryan, whose backheel picked out Ibrahimovic to dink the ball into the net.

The Swede should have doubled the lead when he waltzed through the heart of the West Ham defence before twice being denied by keeper Adrian.

That could have proved a costly miss because for all United's first-half dominance, they were pegged back 10 minutes before the break by one of their former players.

Having come through the youth ranks at United, Fletcher was allowed to join West Ham in the close season and punished his former employers by scoring from close range after David de Gea had spilled a shot from Dimitri Payet.

Payet, however, was the villain two minutes after halftime as his poor clearance was pounced on and fed to Mkhitaryan, who claimed his second assist by laying the ball off for Martial to blast past Adrian.

"Goals plus performance means the real happiness," Mourinho, who would not divulge where he watched the match, told Sky Sports.

"The performance is something we are used to, we are playing very well at home.

Today was more of the same."

The League Cup has not been kind to Arsenal in recent years with the club having now progressed from just one of their previous six quarter-finals, which was perhaps the reason why manager Arsene Wenger chose to make wholesale changes to his side to face Southampton.

The Saints began the brighter and were ahead after just 12 minutes when Dutchman Clasie fired powerfully into the net for his first goal for the club.

The lead was doubled eight minutes before the break when Carl Jenkinson was outmuscled deep in his own half, allowing Sofiane Boufal to break and tee up Bertrand to drill a low finish into the bottom corner.

Apples worth Rs 500 million exported from Mustang
22 minutes ago