Constitution Amendment: For Whom? 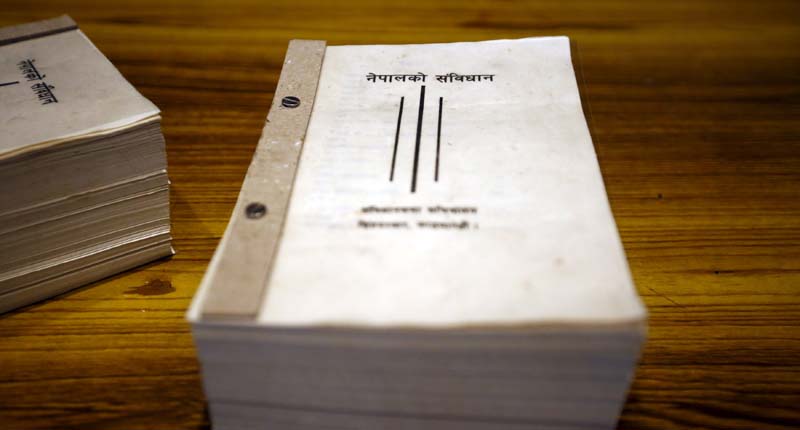 The much-awaited bill to amend the constitution registered in the Legislature-Parliament by the government yesterday has failed to revive hopes. Instead of resolving problems, it has compounded them.

The government has finally registered a bill in the Legislature-Parliament to amend the constitution for a second time, as demanded by the United Democratic Madhesi Front (UDMF). However, nobody – even the Madhes-based parties to address whose demands the constitution is being amended – seem to be happy with the 7-point constitution amendment bill which was registered in parliament on November 29 evening.

“The constitution amendment bill registered in parliament has not addressed any demands raised by the UDMF and the Federal Alliance,” reads the statement. In the statement, FSF-N has lashed out at the government saying that it has made a grave mistake by not including any demands raised by the disgruntled Adivasi Janajatis, Tharus, Khas, Muslims, Women, Dalits and Madhesi Morcha.

The statement warned that the proposed bill will push the country into a perpetual conflict, chaos and instability rather than establishing peace, stability, national unity and development. "We will not accept this bill as it has been brought despite our disagreement. Our protest will continue against racial discrimination and caste-based rule,” the FSF-N said in the statement.

Terming the amendment “unnecessary and irrelevant”, CPN (UML), the main opposition, has already said that it will not allow the registration of the amendment proposal in parliament. The party has concluded that “the constitution amendment bill registered by the government will hamper the country” and has decided to obstruct the proceedings at the Legislature-Parliament from Thursday.

According to UML Vice-Chairman Bamdev Gautam, a Parliamentary Party (PP) meeting of the party concluded that the amendment bill was not necessary as the bases and rationale for the changes in the constitution haven’t been established.

Similarly, lawmakers from even the major ruling parties - the Nepali Congress (NC) and CPN (Maoist Center) - are divided on the changes proposed in the amendment proposal. They are especially against the proposal to remove the hilly districts from Province 5. While the UML is against the idea of redrawing the boundaries of the provinces, even some Madhesi leaders have said that removing the hilly district from Province 5 is not their demand! Also, the agitating parties have refused to commit themselves to endorsing the bill.

The amendment bill prepared by the government proposes to revise the provincial boundaries in Provinces 5, 4 and 6, and amend provisions related to marital naturalized citizenship, representation in the National Assembly and the languages of official business. Demarcation of the provinces is the thorniest issue among the four demands put forth by the UDMF.

Madhes-based parties had staged strikes and bandhs for almost six months following the promulgation of the constitution which divided Nepal into seven provinces. India, too, had imposed blockade on Nepal for six months under the pretext of the Madhes agitation.

It is learnt that UML Chairman KP Sharma Oli and NC leader Krishna Prasad Sitaula are among those politicians who are not ready at all to merge Jhapa, Morang and Sunsari in Province Number 2 (Or the Madhes province). Especially, Chairman of Federal Socialist Forum Nepal Upendra Yadav is for mixing three eastern districts in Madhes province. Morang and Sunsari are the electoral regions for Yadav.

Other demands of UDMF are to make a Tharu Province including the districts from Nawalparasi to Kanchanpur. But NC President Sher Bahadur Deuba, CPN-UML Vice-chairman Bhim Rawal, and NC leader and the current Minister for Physical Infrastructure and Transport, Ramesh Lekhak among others are against including Kailali and Kanchanpur in the Tharu Province as it is their electoral region.

The biggest question that arises here is who is the PM trying to appease by removing five hilly districts from Province 5 and merging them in Province 4 and 6? “He is trying to appease India,” says a senior politician on the condition of anonymity.

Interestingly, all major Indian newspapers have welcomed the registration of the constitution amendment bill.

Only time will tell.

Nepse loses 10.83 points on concern over contraction of liquidity in banks
33 minutes ago