Proving that she can

KATHMANDU, Jan 28: To rise above societal hierarchies can get tricky, even more when a woman has to break out of societal chains. Belmaya Nepali exemplifies that it is possible to excel even within the patriarchal society.

Nepali is a 25-year-old director from Pokhara who already has few appreciated films in her portfolio. Coming from a Dalit family, one with poor economic background, she didn’t get the opportunity to complete her formal education. Also she never was a bright student in class and eventually dropped out of school after Grade V. She is the youngest of six siblings, with an older sister and four brothers. They lost their parents when Nepali was nine years old.

Though she had always been vocal about her opinions, she later noticed that she wasn’t taken seriously for failing to be educationally qualified. This changed when Nepali got a chance to take photography classes at the age of 14. With camera in her hands, she got a new way to present her ideas and perspectives through photographs. She got to work as a photographer for a book called ‘My World, My View’. As of yet, she has participated in different exhibitions including ones organized by the British Council Nepal and the Royal College of Art London.

Having gotten married at a tender age of 19, Nepali is a young mother to a baby girl. After giving birth, she soon got enrolled in a documentary filmmaking training, where she got to explore more aspects of her own life, and even gained a new perspective to look at other women’s lives. As her graduation film in 2016, Nepali made ‘Educate Our Daughters’ that talks about the lack of education among girls and advocates the importance of education for them.

She had always wanted to promote issues of local importance. And in her film ‘Rowing Against the Tide’, Nepali filmed stories about three boatwomen of Pokhara (Batuli, Laxmi and Sunita) revolving around their struggles to survive in the patriarchal world. The young director since then has submitted her films to multiple films festivals around the world and has been appreciated for them. After which, she has noticed that the people now looked at her differently and respected her as an individual. Even her family now has turned supportive of her endeavors.

She recently participated in the Kathmandu International Mountain Film Festival (KIMFF) in December 2017. Nepali got her two films screened at the festival, and it was the first time that she got to travel outside Pokhara as well as network with like-minded people.

She believes documentaries can give proper insight to one’s story in comparison to writing or just telling a story. And it was through documentation that she grew her confidence to voice her opinion even stronger, socialize better, and found courage to make decisions for herself so it has a special place in her life. Through her own life, she wants to send a message that even uneducated people can make a difference if given the right opportunity.

After having tried her hands in direction, she is currently working for a film that is based on her life. Director/producer Sue Carpenter and producer/executive producer Christopher Hird are currently working on a documentary on Nepali’s life titled ‘I Am Belmaya’ that revolves around her family, struggles and her as a source of inspiration. She is also co-directing the documentary. Though Nepali has a short hand in English and Sue in Nepali, yet they speak in broken languages and manage to understand each other well. The chemistry between them is endearing. On the sidelines, she also works for catering services for some extra income. 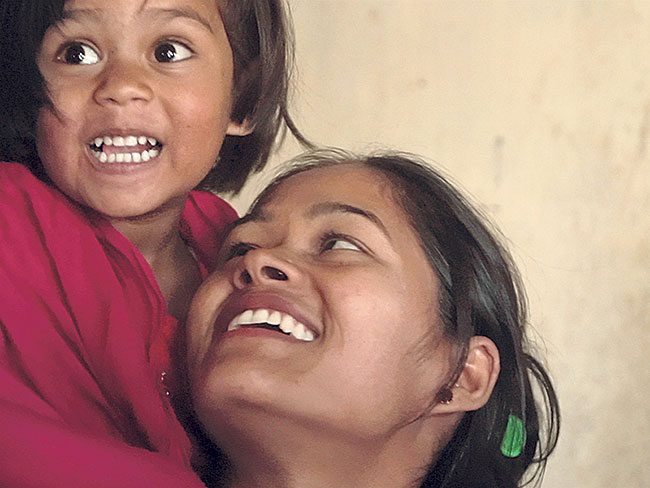