PARBAT, Sept 26: Different organizations -- government and non-government -- conduct vocational training intended at developing skills of the youths. However, contrary to the expectations, these skills development activities have not been able to generate sufficient employment opportunities. Though these organizations spend millions to promote self-sustainability, the gains are still under par. But, when dedication and perseverance are involved, the path to prosperity is very easy. Prakash Nepali, a resident of Kushma Nagarpalika – 7 has shown the possibilities of making a living even without participating in such training programs. Moreover, his widespread acclamation keeps him occupied, contributing to sufficient return, throughout the year.

Nepali was interested in sketching from a very tender age. He has been professionally engaged as an artist since the past eight years. His family depends entirely on the proceedings from the sale of his paintings and sculptures. Nepali says, “I am occupied throughout the year. Though I first started painting as a hobby, it’s now transformed into a full-time profession. I had never imagined I’d grow up to become an artist, but today, I am capable of providing to my family with my work.”

Nepali’s fame is widespread across Parvat, Myagdi, Baglung, and their neighboring regions. In the course of sculpting, he has traveled to several places of Pokhara, Tanahu, and even reached Dadheldhura on several occasions. His artworks are the centerpieces of several noted hotels, resorts, restaurants, and school.

Prakash Nepali’s journey to professional sculpting
Nepali is a self-taught artist. He rose to fame after displaying a life-like portrait of Mahendra Shah -- the former king of Nepal; he was only six. Nepali drew a life-like picture of the emperor during a school competition, leaving everyone astonished. For his outstanding drawing, Nepali was awarded the first prize.

However, poverty led the artist to drop out after fifth grade. Nonetheless, he honed his skill away from school by investing additional time in sculpting images on rocks.

In the meantime, a discussion on building a temple in his neighborhood took place. The community handed him the responsibility of carving the deity for the shrine. He finished his job within one month, leaving his fellow villagers amazed. For his contribution and top-notch sculpting, the community felicitated him. Thenceforth, he started receiving further encouragement and sculpting contracts. Though his skills improved, his poverty remained. Earning a two-time meal was still a challenge for Nepali and his mom. Poverty yet again acted as a barrier to enhancing his skills.

He issued citizenship and passport. In hopes of better days, he traveled to Saudi Arabia for foreign employment at 18. Not even in his wildest dreams, he had dreamt that his skills would help him pay his bills. Therefore, he wasn’t keen on promoting his art but later was compelled to showcase his talent to find a better job abroad, and he got one. Yet, he wasn’t satisfied.

Instead of investing his sweat in the scorching heat of Saudi Arabia, he chose to return and work in Nepal. After returning six years later, he vowed to never go abroad for employment.

It has been over eight years since he returned, and is earning abundantly. He says, “Not just work, but the earning also increased.”

Nepali’s artwork mostly attracts hotels and restaurants. Though his work, he earns a minimum of Rs 2,000 a day. His earnings double during peak season.

There was a time when the community was hesitant about providing a loan to Nepali, but now, he is a well-known personality in his society. He has been felicitated by Baglung Chamber of Commerce and Industries, Rotaract Club of Parwan, and many other organizations.

My profession guarantees self-sustainability: Prakash Nepali
I was interested in drawing since childhood. During free time, I would go around searching for rocks to carve on them.

I remember drawing a portrait of King Mahendra when I was six in a school competition. I won the first prize.

However, due to poverty, I had to travel abroad. My poor economic condition left with no other choice. But I continued work which was related to sculpting even in Saudi Arabia. Eventually, I started missing home. I returned to Nepal  after serving in Saudi Arabia for six years. In Nepal, I initiated my own business -- of carving idols and painting. It took me some time to sell my skills.

I went to different hotels and restaurants to promote myself. It's a gratifying feeling that my patrons loved my work, and now it's in high demand. 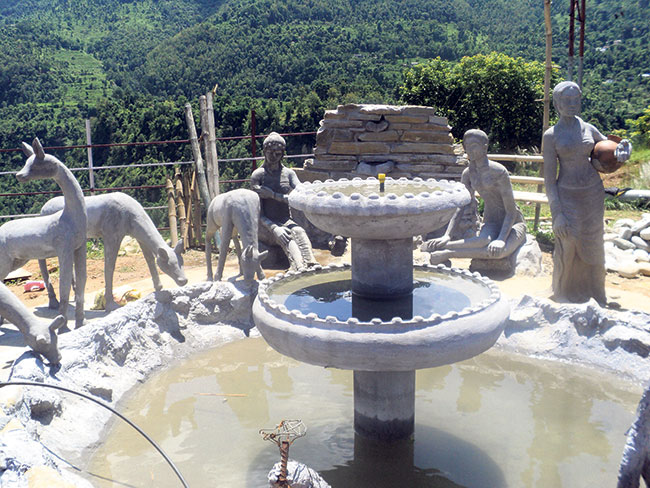 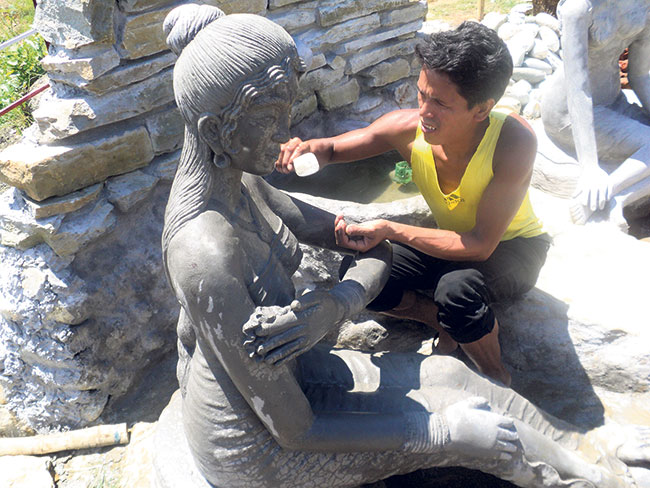