‘Manmaya’—a social drama was staged in the premises of the Hotel Himalyan, Kupondol on Sunday. Directed by Anup Baral, the play was a part of Academic Conference on Gender Equality and Sexual Trafficking in Nepal.  The conference was jointly organized by Kathmandu Medical College, Linnaeus University, Sweden and Actor’s Studio.

The play touched the issues like violence against women and girls trafficking via its lead character—Manmaya. It starts with a scene in a classroom where bunch of boys mock and bully the girls regarding their sexuality. One of the girls, Manmaya, reiterates against the bullies and apparently slaps one of them. As a result, the boys photoshop her picture, and make it nude. This harms her image. Manmaya is then bound to discontinue her studies and forced to get marry. However, her life gets worse after the marriage. Her husband is a drunkard and a gambler as well. He continuously tortures Mannaya physically and mentally. Her aunt then consoles her with a guaranteed job in India and Manmaya is trafficked across the border. She is however rescued and deported back in Nepal. But, this doesn’t do any good, as she is again humiliated by the society.

Manmaya had the audience glued to their seats. The storyline, performance of the actor, and dialogues were imprinted on their minds. Usually, spectator’s engagement throughout the play is simply to enjoy the act. However, audience is a part of the play as spectators and actors as well in the play since it is based on Forum Theater. They present their own interpretation and enact it along with the actors.

According to Baral, the forum theatre is an effective medium to addresses the issues of community and instantly solves the problem suggested by the audiences. “The play was based on a four-year research aiming at minimizing the rate of human trafficking and women violence in Morang district. Earlier, we showcased three different plays in 10 rural municipalities within in a year,” he said.

Bhabasaga Ghimire penned the play while Deeya Maskey, Suraj Malla and others actors shared the stage. 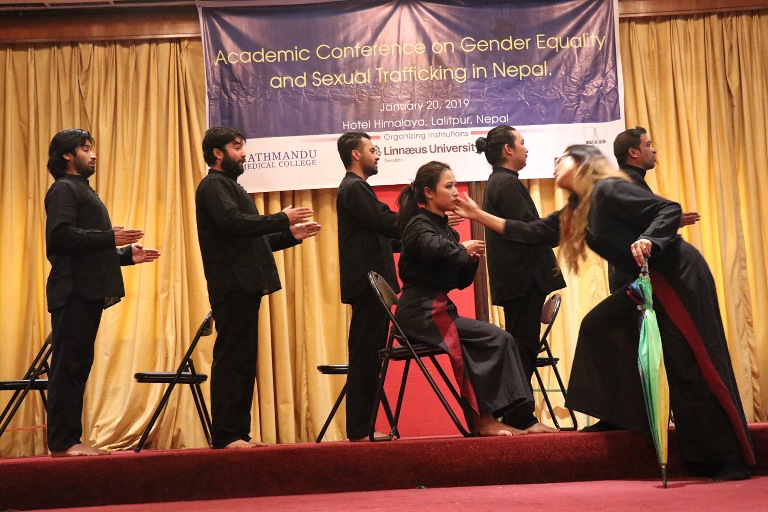