Thirty-two kilometers east to Kathmandu is Panauti, one of the oldest Newari cities outside of Kathmandu. The city celebrated its annual Jyaa Phuhi Jatra on Monday; and ends officially on Thursday.

The festival includes gods/goddess Brahmyani, Indreswor Shiva, Bhadrakali and Unmanta Bhairav and their idols are taken out from their respective temples for the celebration. The significance of this festival, however, lies in the fact that it is celebrated as a means to bring rainfall. Thus, it is considered a bad omen should rain not grace the festivities.

Till today, however, rain has always managed to fall during the time of the festival. During this festival, there are various attractions, people play with vermillion power, visit temples for worship, sacrifice animals to the god and goddess which also includes a chariot procession of Lord Bhairav and goddess Bhadrakali; which is followed by a procession of Lord Shiva whose chariot is unique because it does not have any wheels and is thus carried by devotees.

It is also believed that if the young priest, riding atop the chariot, falls during the trip then the ones carrying the chariot as well as the devotees watching the procession will be blessed with monetary windfall. 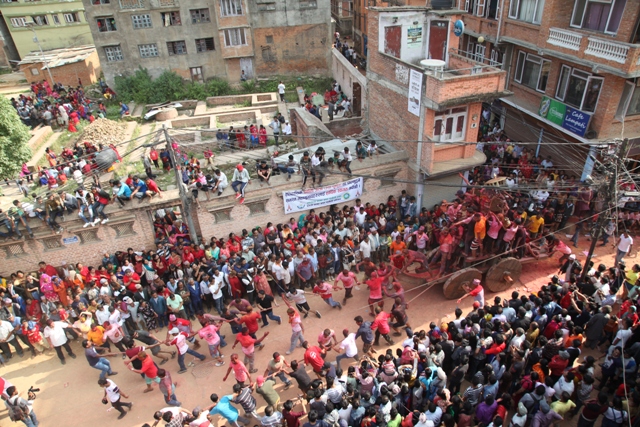