MAHOTTARI, Oct 3: Jitiya Parva, the most-awaited festival of the women of the Maithali community started this Monday. In the beginning hours, women devotees take dips into nearby water sources before initiating fasts -- wishing for the longevity of their family members. The custom of offering oil and khari (pina) in yam leaves to Lord Jitumahan is widely practiced during the festival.

On the second day of the festival, women wake up before sun-rise and attend a puja. They then place beaten rice, curd, and sweets at their doorsteps. The offerings, made to the deity, are later consumed by the members of the family.

Women fast during this festival, which starts from Ashwin Krishna Asthami, listening to the tales of God Jitumahan. The fasts continue from Asthami to Nawami. The devotees are prohibited from consuming anything – solid or liquid. It is regarded as one of the strictest fastings.

According to Mahendra Prasad Jha, a local resident in Jaleshwar municipality-4, women start fasting from Tuesday and break the fast the following day. Women are entitled to food only after taking a bath in a nearby river or pond.

Various animal and birds, including eagle, fox, cow, pigeon, and crow are worshipped in the festival. Myths suggest that a fox and an eagle used to live in a tree by the Narmada River at Kankawati. The sight of women partaking in the Jitiya Parva inspired the two to start fasting.

On the same evening, a funeral procession of a businessman’s son was taking place.  As the body was being cremated, the fox had the urge to eat the remains of the deceased. He eats the flesh, and commits a sin by breaking his fast. The eagle was apathetic to the incident.

In later lives, both were reborn to priest Vaskar as Shilawati and Kurpurawati. Shilawati, the eagle, was married off to the wealthiest family in the kingdom whereas Kurpurawati, the fox, got married to a King. Elder sister Shilawati had six sons. However, Kurpurawati gave birth to a dead son and failed to conceive any further.

Kurpurawati was dissatisfied with her situation and envied her elder sister. As a result, their relationship worsened. Shilawati then came to know about their past lives and the sin her sister had committed. She told Kurpurawati that breaking a fast in a previous life was the cause of the death of her son.

The consequences of an improper fast are believed to fall upon the children of those who break the rules of fasting. However, those who follow the customs are said to be blessed with a son. A proper fasting is believed to ensure the well being of their children.

During Ashwin Krishna Ashtami, devotees bathe at a nearby water source and worship the Sun God. They then return home to fill their baskets with coconut, apples, banana and other edibles. The baskets are covered by a piece of cloth.

During midday, women gather to share stories about fast, and Lord Jitumahan. As the story-telling session ends, they return home to end the fast. During the evening, the ground is smudged with cow dung and a pond is built. Devotees bury Pakadi tree branches at the river dam. They also draw the images of the eagle-- in the branch -- and jack -- under the branch. 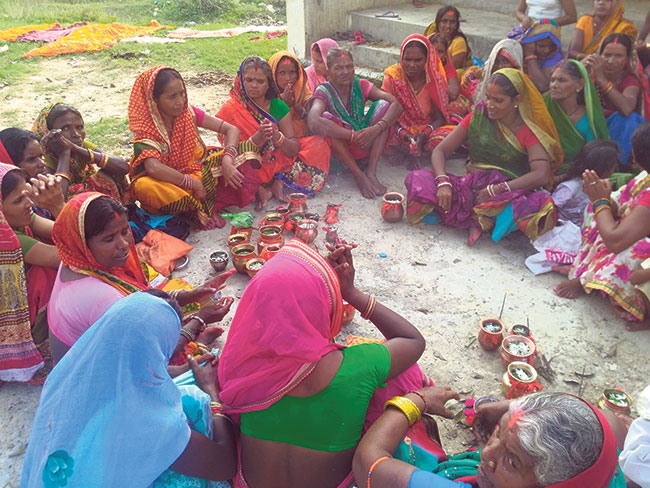