The global coronavirus pandemic has been spreading rapidly across the world, changing its epicenter with time. Since its outbreak in Wuhan, China in December 2019, its shifted to Europe with a first focus in Italy, and after affecting other European countries it now seems to spread across the United States. The virus is confirmed to have spread to Nepal, where a person was tested positive in January.

To contain the spreading of the virus, there are many efforts by the governments including banning or limiting people gathering, closing schools, restaurants, and ultimately lockdown. These are hoped to be the possibly best actions which helps to flatten the COVID-19 epidemic curve.

In Nepal, as the national government issued a request to schools to finish the annual examinations of grades 1-9 before Chaitra 5 (March 18), almost all schools had followed the request and the examinations for grade 10 (so called SEE) are also postponed until further notice. The Nepal government decided to rule country-wide lockdown for one week on March 24, and extended it by another week until April 7, while the ban on all domestic and international flights lasts until April 15.

Seismometers are sensitive devices that are capable of recording vibrations: not only earthquakes, but also movements of the Earth created by other, natural or manmade sources. For example, seismometers record the ground vibrations caused by vehicles, industrial work, airplanes, or simply people moving around alone or in groups. In essence, the activity of a town or city is visible on a nearby seismometer’s record as environmental noise. The instrument is so sensitive, that the effect of lockdown is very well visible on seismometer’s record, for example on the stations installed in 22 schools in Province 5 and Gandaki Province in frame of the Seismology At School In Nepal program. 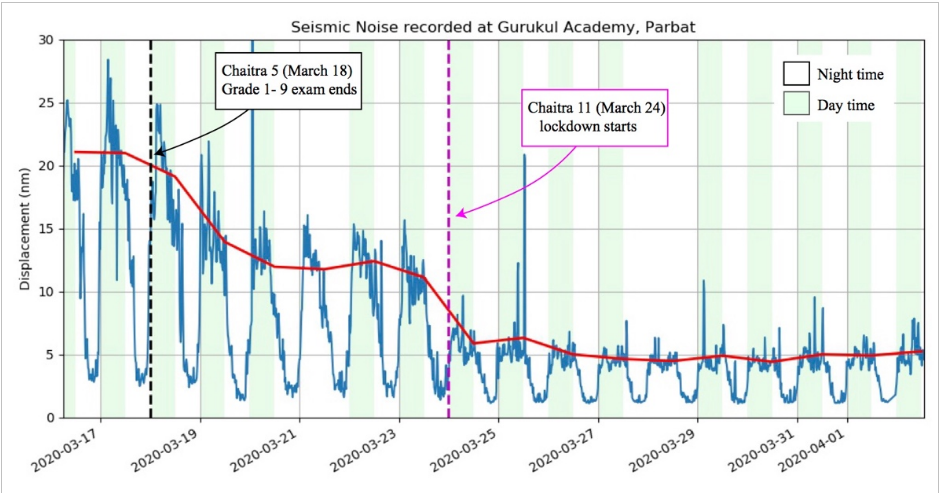 The first figure shows the evolution of background vibration with time on the seismometer installed in Parbat Gurukul Academy School in Kusma, Parbat district. There is a big difference between daytime and nighttime environmental noise. The vibration caused by the daytime human activities started to decrease from March 18, when the annual examinations for grades 1-9 were finishing. The trend (in red line) is further decreasing, and after the country-wide lockdown the measured vibration level is only about one-fourth of the usual level. This means that the majority of human activities have stopped in the area, and even the nighttime noise is reduced, meaning a decrease of traffic and machines. Even though Kusma is not so densely populated compared to big cities, human activities have become significantly calmer.

The second figure show that ground vibration is usually high at the seismometer installed in Birendra Secondary School, Birendranagar, Chitwan, as the school is situated within 500 meters of the East-West highway. The effect of terminating examinations, and the effect of Saturday are not detected. However, the effect of lockdown is very well visible there too (one can even say that it took one day, March 25, to really decrease traffic). The records show that manmade noise in the area has significantly reduced in this area both at daytime and nighttime as an effect of lockdown: no students in the schools, no vehicles on the street and highway, and machinery not working nearby the school. Such low levels of seismic noise were never detected since the seismometer was installed there a year ago.

We observe similar results at all other stations installed in different schools of our network. In general, we can say that people in Nepal are respecting the lockdown seriously to contain the spread of the virus causing COVID-19 as their activities are limited to a minimum.

The seismometers mentioned here are installed in schools under the framework of the Seismology At School In Nepal program to make people better aware of earthquakes and their preparation.

Shiba Subedi is a doctoral student and György Hetényi is a professor at the Institute of Earth Science, University of Lausanne, Switzerland.

Five summer essentials for your next beach holiday

A letter to you…