Get on your bike: Coldplay hopes to lead with a green tour

It’s often said that fans at live concerts give the band a jolt of electricity. Coldplay wants to literally harness that.

The pop superstars have added kinetic dance floors and energy-storing stationary bikes to their latest world tour, encouraging fans to help power the show as they dance or spin. 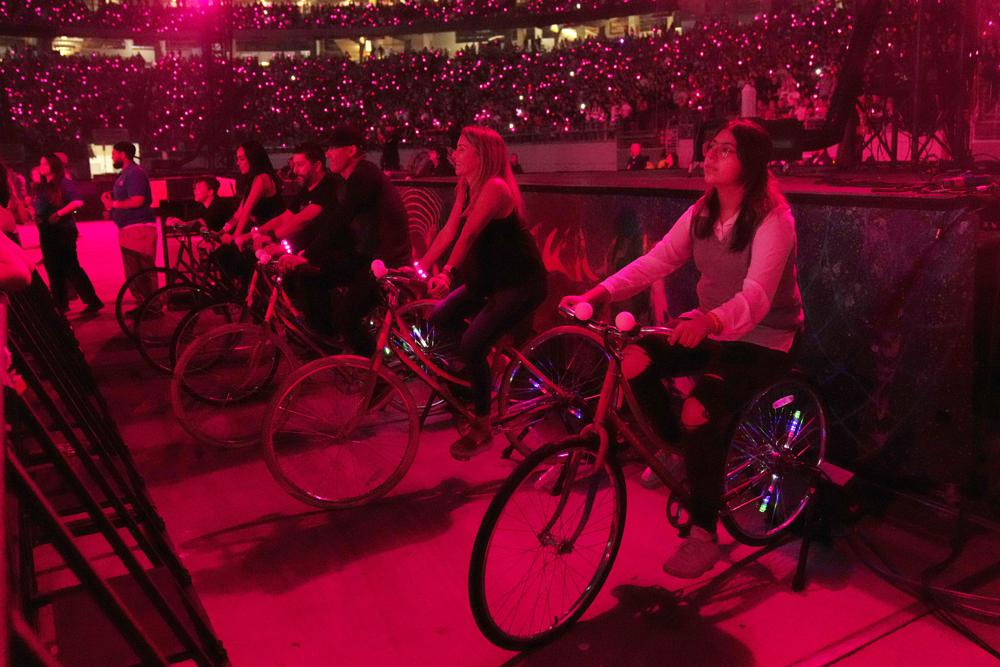 It’s part of a larger push to make the tour more environmentally friendly. The band — whose songs include the appropriately titled “Higher Power” — has pledged to be as sustainable and low-carbon as possible, hoping to cut their CO2 emissions by 50%.

“You don’t want to come across as being overly earnest. This stuff is really good fun as well,” said bassist Guy Berryman. “That’s the way it will bed in, if people see it less as a sort of onerous responsibility and more as a kind of opportunity to do something fun and it’s a benefit to the environment and to the whole concert experience.”

Each kinetic dance floor can hold dozens of people, with electricity created when movement is made on them. The band has pre-show contests to see which group of fans can generate the most power, fueled by “Jump Around” by House of Pain.

And each of the bikes — a minimum of 15 but can be scaled up depending on the venue size — can generate an average of 200 watts of energy, captured in batteries that run elements of the show.

Coldplay is just one music act working to reduce effects of the climate footprints of their tours, a list that includes Billie Eilish, Harry Styles, The Lumineers, Dave Matthews Band, Shawn Mendes, Maroon 5, John Mayer, Lorde, The Chicks, Jason Isbell and The 1975.

“The relationship that musicians have with millions of their fans is unlike any other relationship of any other public figure. It can be a walking, talking example,” said Adam Gardner, founder and co-executive director of Reverb, a nonprofit that helps bands make their concerts greener. It is not helping Coldplay’s tour.

The artists are reflecting an overall push in the entertainment sphere — from sports teams to toy manufacturers — to reduce their carbon footprints. A study by Live Nation found 82% of live musicgoers said they strive to maintain an environmentally sustainable lifestyle. 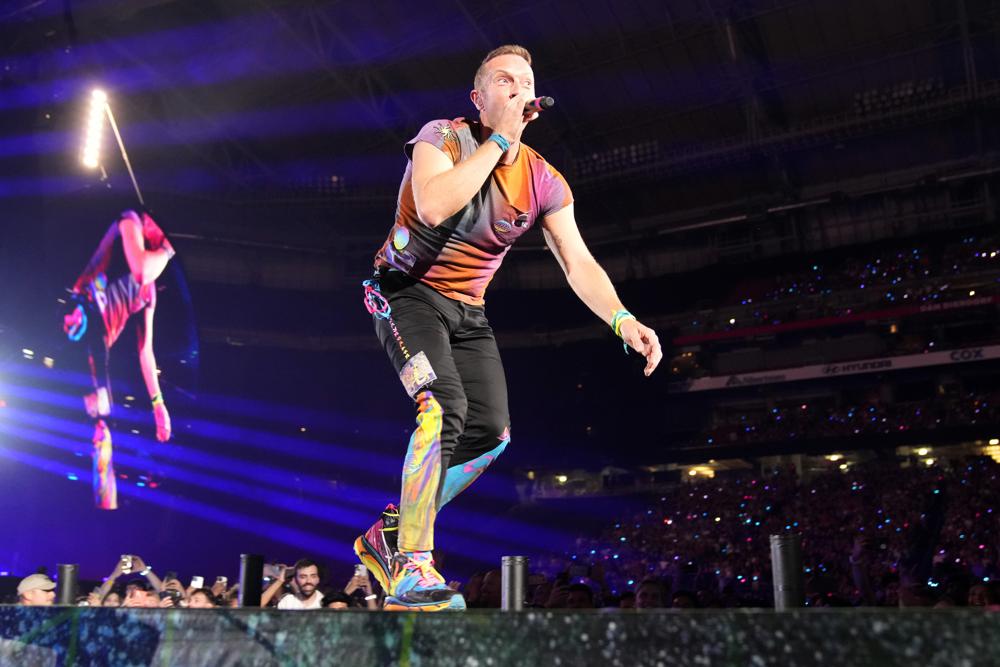 “Being green is not a charitable sort of self-flagellating, holier-than-thou exercise. It’s a good business model. That’s what we’d like to show,” said Coldplay lead singer Chris Martin. Added guitarist Jonny Buckland: “It has to work.”

The efforts involve everything from providing more plant-based food options at concessions and eliminating single-use plastic to rethinking transportation — the most environmentally taxing aspect of tours — for both musicians and fans.

Eilish has pledged to eliminate an estimated 35,000 single-use water bottles from her tour and only serves vegetarian food backstage. The band Massive Attack is traveling by train, and Olivia Rodrigo’s “Sour” merchandise is sustainably dyed and 100% organic cotton.

Mendes has pledged to reduce his tour’s environmental impact and emissions by 50% per show, employing sustainable fabrics in tour hoodies and T-shirts, staying at hotels that commit to net zero emissions, eliminating plastic and using sustainable aviation fuel. Styles’ recent tour had battery recycling centers, and it donated unused hotel toiletries to shelters.

Coldplay plans to minimize air travel — but when flights are necessary, the band will opt for commercial over charter — and will use trains and electric vehicles whenever possible. Trucks will use alternative fuels like hydrotreated vegetable oil.

The “Music of the Spheres” tour stage uses recycled steel, and the band hopes to deploy the world’s first tour battery system, made from 40 repurposed and recyclable BMW electric car batteries. The hope is to power the entire show from batteries, never needing the grid or diesel generators.

There’s also biodegradable confetti, compostable wristbands for the audience, the use of solar panels and the backstage generator is powered by vegetable oil. All band merchandise is sustainably and ethically sourced and 10% of the tour’s net revenue will go to environmental organizations like The Ocean Cleanup and One Tree Planted.

Coldplay drummer Will Champion said the new green technology may be helpful to other bands just starting out on tour and hopes all musical acts can share experiences of what works and what doesn’t.

“The more this is out there and the more people are taking initiative and coming up with new ideas, the quicker it becomes industry standard,” he said. “When that tips to the point where it’s a no-brainer because it costs the same or less than traditional ways of doing it, that’s when the floodgates open and then we make significant change.” 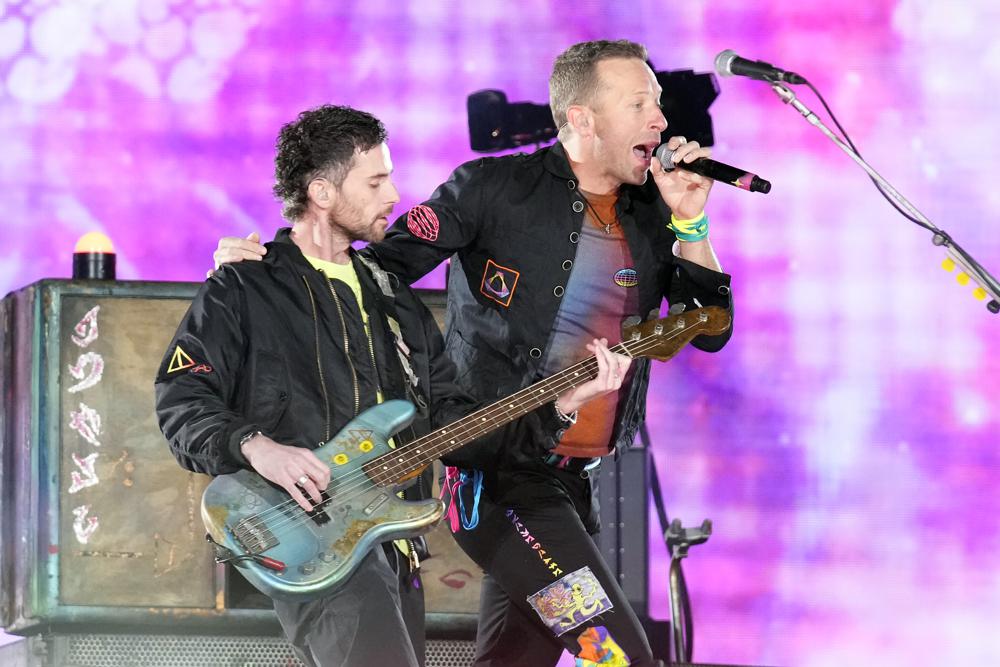 But change hasn’t always gone smoothly. Coldplay has been accused of greenwashing because it has partnered with Neste, which bills itself as the world’s largest producer of sustainable biofuels.

Transport and Environment, a Brussels-based environmental organization, said Neste has “documented links to deforestation and dubious biofuels,” like palm oil or its byproducts. But Neste responded that “conventional palm oil” was not used as a “raw material” in the Coldplay collaboration and it hopes to end use of conventional palm oil by 2023.

“Some artists that we work with are ready to jump in full-on and others are looking at the things that they’re able to change right away. And I think the most important thing is to start.”

Coldplay isn’t just pledging to reduce its own carbon footprint. It’s also building incentives for its audience to do the same on the way to the venue.

There’s a free app for fans that calculates and ranks different ways of traveling to the concert — car, public transport, taxi, bike and train, included — with rewards like discounts on merchandise for those who commit to taking more green-friendly trips. The band also hopes to make free local public transport to the gig available to fans in America and Europe.

“Everything in our show is really designed to bring everyone into the same group, singing together and wearing the wristbands. And this is just an extension of that. It makes us feel alive. It makes us feel part of a community,” said Martin.