Exploring the real stories of the Gurkhas

The first-ever restaurant to serve haas ko choila in the Kathmandu Valley, ‘Shyam Dai ko haas ko choila’ has been around for a solid 28 years. Choila is traditional Newari delicacies- chunky meat pieces packed with flavor after intense marination with local spices. Though buff choila and chicken choila are more commonly available in local eateries, ‘haas (duck) choila’ is a rarity in itself. Only a handful of restaurants have incorporated the savory item in their menu.

Established by Shyam Rajak, the eatery-located in Dhobighat- is regarded as the best choila place in the city. When Rajak first began his enterprise, there was no other eatery serving the dish, let alone showcasing it as the main item. Now, however, his success has inspired the establishment of several restaurants focusing on this dish. These chains of restaurants which also serve “haas ko choila” are lined up right next to Rajak’s restaurant. However, despite increasing competition, Rajak’s restaurant continues to hold strong its stance as the best choila place. “We are the first choice for anyone seeking to devour on haas ko choila”, Rajak said adding, “People usually go somewhere else only if our restaurant is unable to accommodate them”. The choila place is packed throughout the week- seven days straight.

Aside from the main dish, the restaurant presents many other typical Nepali delicacies including ‘aalu kabab’, ‘sadheko bhatmas’, ‘hariyo sandheko lasun’, and ‘khasi ko gidi’ among others. Sanjeev Kumar Dhakal, who has been a regular to the restaurant for the last 15 years, says that the consistency of taste, flavors, and the portion size at the restaurant is top notch. “I enjoy every meal at the eatery as if it were my first”, Dhakal said.

Rajak, now 72-years-old, continues to work with the same passion and dedication with which he had first entered the culinary profession some six decades ago. His excellent work ethic is commendable. One would have believed he would have backed out from his job after having to remove his kidney at seventy but it seems as though nothing can ever burn Rajak’s passion for his job.

A weak financial situation had first forced him to pursue a career at a very young age of 13. Decades of experience has shaped Rajak into a true entrepreneur and a talented chef. He previously worked at numerous guest houses and hotels, including Soaltee and Annapurna, and was also employed in Japanese lines including Hajama Company and Fuji Restaurant which provided him with the sufficient experience to begin his own enterprise.

“Everything was self-financed”, Rajak said adding, “I made an initial investment of Rs 25,000 which was a huge amount at that time”. Five years of commitment and dedication led to the establishment of a well managed and functioning enterprise. It was initially just a one-roomed structure built piece by piece, gradually expanded into a proper two roomed eatery able to accommodate approximately 20-25 customers at a time. The road-side eatery which was initially run by just two- Rajak and his wife Dhanmaya- soon expanded into a family business, run by his daughters Ganga, Rita, Gopini, Jamuna along with helpers Sang Dolma, Kamal B Rai, and Shekhar on a rotational basis.

During the beginning of his business, Rajak would have to travel all the way to Gongabu to get ducks. “I went to Gongabu on foot at around 4 am in the morning, and I would return with the ducks on the bus”. With times changing, he has been able to experience some comfort. A contractor now supplies the 70 kg of duck meat he needs on a daily basis at his doorsteps.

Work begins early for Rajak and his family. The entire morning is spent as part of the cleaning process, and preparations for the day. The peak hour is between 2-5 pm when customers come for their mid-day snack. While ‘haas ko choila’ remains the star dish, khaja set is also extremely popular among visitors. Comprising beaten rice, choila, potatoes, and traditional Nepali pickles; the khaja set constitutes of a variety of dishes packed into a single plate. “Khaja set allows us to experience the variety of dishes available in one go. Everything from the choila to the pickles is top-notch, packed with flavors”, Roji Tamrakar, a customer said.

Rajak continues to embark on his day as if it were his first. One would expect life to be monotonous for someone who has been involved in the same work for decades but he begs to differ. Each encounter with customers brings new and unique experiences, different and unique from the rest and that’s what makes his job so special and worthwhile. When asked when he will retire, Rajak said, “I will continue to work as long as my body allows, as long as I am physically fit for the job”. 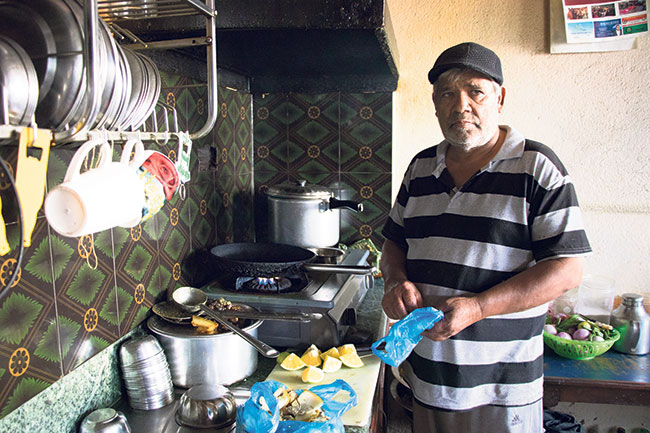 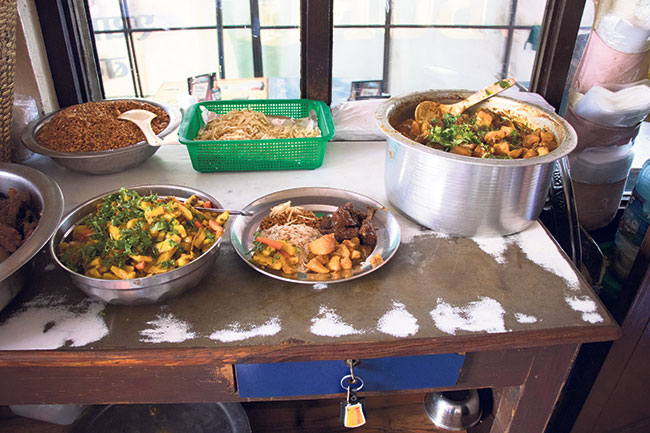 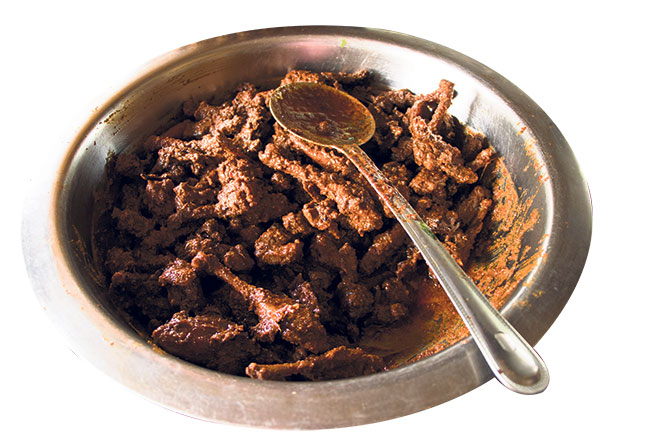