“Though God has deceived me I won’t betray my life”

The verses above are from the song entitled ‘Daiba Ley Malai Thugey Pachhi’. Amir Bomjan is the singer.  Through the song, differently abled Bomjan expresses his feeling, despite suffering from arthrogryposis (curving joint), he won’t loses his hope. It was launched amidst the special program hosted by Karuna Foundation Nepal at the premises of the Russian Centre of Science and Culture, Kamalpokhari on Friday.

With the slogan  “Count me, Include me”, the foundation is trying to circulate the message that persons with disabilities also contribute to society if they get the right opportunity to showcase their talent.

Three other music videos were also launched. Bomjan performed ‘Malai Nindrama Jhaskhauchha’ himself at the program.  Bomjan and Laxmi Bhakta Bhasima were painting live on stage.  Bhasima is also a physically challenged emerging professional artist from Bhaktapur. Bomjan painted the bird,a contrast of brown and green colors,sitting on the branch on a canvas. Surprisingly, Bomjan painted using the paint brushed with his the mouth. He completed the painting in a  short duration. Similarly, Bhasima painted a beautiful mountain.

Addressing amidst the  event, Bomjan said that he is very thankful to  Karuna Foundation Nepal for exploring his hidden talent and bringing it out to the public. “I feel very lucky to be working with such prominent figures like veteran artist Kiran Manandhar, music composers, Basanta Sapkota and Nhyoo Bajracharya,” he shared. “If our family members, society and the government will support us, we’ll be normal like you.” Said Bomjan.

According to Binita Luitel, admin assistant of the Foundation, they found Bomjan in his hometown, Makwanpur after the 2015 earthquake. “We visited the earthquake affected districts in search for talented and physically challenged people. We found Amirn a multitalented artist. He had a strong passion for singing songs, writing poems and painting. He has been painting from his early childhood. He also studied till class five with support from his mother. Unfortunately, because of the distance between the school and his home, he couldn’t continue his further study,” Luitel added.

Meanwhile, there was a  joint art exhibition of Bomjan and Bhasima. 20 paintings from Bomjan’s collection and Bhasima’s 25 paintings  were also put on display. 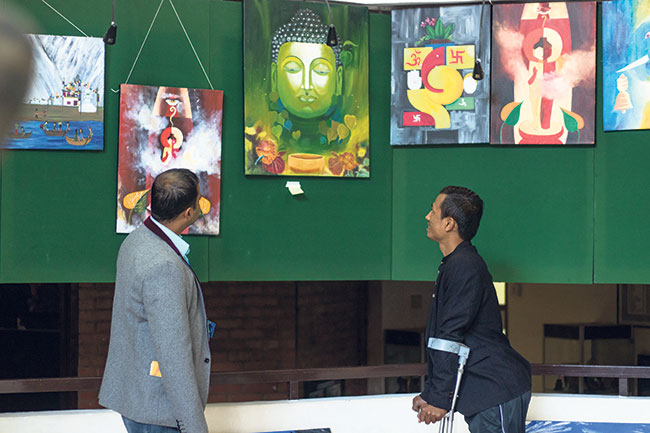