Concerned over the increasing rape cases in the country, actress Reecha Sharma posted an open letter to Prime Minister KP Sharma Oli on her Facebook page on Thursday.

In the letter, Reecha has shown her concern over how the culprits are either walking scot-free or spending minimal days in jail with nominal fines or are being covered up. She questioned the safety of daughters and argued that if she has a son, she is scared and worried that he might grow up with a mentality that this country and its laws will do nothing to those who commit crimes.She writes, "I am afraid that I will not be able to make a safe place for my daughter. I'm scared to have a son tomorrow. No matter how much I try to teach him culture and discipline, I am worried that my son will grow up in this country with a mentality that its laws will do nothing to those who commit crimes."

Reecha further writes, "In a country where the President is a woman and women are worshipped, I feel that we are still living in the age of Sita's ordeals, where law enforcement agencies take heinous crimes like rape as a minor thing."

"Though we grow in accordance with the technology, unfortunately our mindsets are still lagging behind. We only pity the girls who are sexually abused by the demons. I urge you to look into the eyes of the daughters and grandchildren in your family, if not the citizens. Are they safe in this country? I am a person who believes in the government, but my legs are shaking today. The rest is for you to understand!” she ends her letter. "Yours an ordinary Nepali woman, Reecha Sharma." 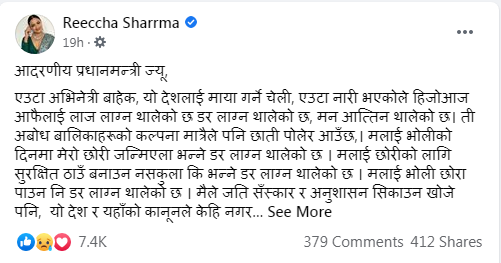